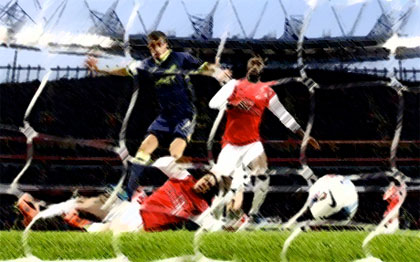 Any concerns about the bubble being burst were laid to rest in emphatic fashion last night as Latics emerged from a traditionally nightmarish fixture with three points of gold and another famous scalp.

The scoreboard beggared belief after eight minutes of football, during which Franco Di Santo capped off a flowing breakaway and Jordi Gomez stabbed home a Victor Moses cross at the second attempt. Given the club’s dreadful record at the Emirates — no goals scored there since 2007, plenty conceded — this was a sight for sore eyes.

There is much to appreciate about Arsene Wenger, his teams, and his team’s form of late, but there was a dangerous air of arrogance evident in those opening passages of play. When asked about Wigan’s attacking threat a day earlier, the Frenchman err-ed and ahh-ed before mentioning Victor Moses, Emmerson Boyce and Maynor Figueroa. While inadvertently picking out three of Wigan’s top performers on the night, his response implied that he had not watched much of Wigan lately. Figueroa, of course, has been playing as a left-sided centre-back, while Boyce, an excellent defender, has not been a key contributor in attack. And Victor Moses — well, they clearly hadn’t watched enough of his recent play, because he ran rings around them all night.

Whether it was lack of homework or not, when James McCarthy nipped in to initiate a counter-attack on six minutes of play, it was clear Arsenal had committed too many men forward. The midfielder fed Victor Moses, who played Jordi Gomez into space. The Spaniard, back in the team after Shaun Maloney picked up a knee injury in training, threaded the ball into Franco Di Santo’s path, who poked at Arsenal keeper Szechzny, watched the ball balloon over him, then volleyed into the back of the net.

Moments later, with Latics’ first real possession of the match, patient build-up saw Victor Moses superbly spin past Bacary Sagna, drive a low cross into the box towards James McArthur. As with the first goal, the Scotsman’s first effort was blocked, but this time his teammate Gomez was ready to pounce, making it 2-0 after eight minutes of football.

Arsenal were shell-shocked, but quickly regained the initiative, with Tomas Rosicky looking particularly lively. Ali Al-Habsi made a superb flying save from a looping Yossi Benayoun header after sustained pressure. In the 20th minute, Rosicky shed his marker to deliver a beautifully balanced cross onto the on-running Vermaelen’s head. Al-Habsi was paralyzed, but there was little he could do such was the power behind the header.

The next stretch of play was crucial to the match as Arsenal piled on the pressure, urged to shoot on sight by their crowd. First, Van Persie struck a venomous shot straight at Al-Habsi from outside the box. Next, Johan Djorou went a fraction wide with a volleyed effort following a penalty box mixup. The key moment, however, came after James McCarthy — only seconds back on the pitch after receiving treatment for a knock — cheaply gifted Arsenal possession. With Rosicky and Van Persie bearing down on Caldwell and Al-Habsi things looked grim. But the Arsenal men fluffed their lines, not realizing it would be their best chance to equalize for the rest of the evening.

Wigan had a half chance on the stroke of half-time, with Jordi Gomez ballooning a shot from outside the box, but looked relieved to make it through the tunnel with their advantage intact.

The second half was a different beast. Arsenal dominated possession but Wigan defended exceptionally well and created three or four excellent goal-scoring opportunities. Victor Moses, who had already outwitted Bacary Sagna for the second goal, this time out-muscled him, barging into the box only to slam his effort straight at Szechzny. Minutes later, the Nigerian was barreling toward goal following a Maynor Figueroa long-throw, only to rush his shot at the Polish keeper. James McArthur, whose supply of energy and industry is bottomless, broke from his own box to release Moses down the left wing. The winger picked his head up this time, lofting a delightful far-post cross for Jordi Gomez, who mishit with his right boot.

Conor Sammon came on to replace the heroic Franco Di Santo, while Mo Diame relieved Jordi Gomez with about 10 minutes to go. Both subs made excellent contributions, injecting freshness of mind and body, providing relief for their tiring teammates. The big Senegalese midfielder might have added his name to the scoresheet in injury time after skillful dribbling opened up some space at the top of the box, but his left-footed strike failed to trouble Szechzny.

The final whistle predictably started a round of boos at the Emirates, but this was another terrific achievement for the Latics.

We have gone from a team that needs 20 chances against weak opposition to score a goal, to a team that only needs one or two against a big team. It’s all down to confidence and a bit of luck. No one knows better than us — having spent most of the season in the relegation zone — that those two go hand-in-hand. It’s a been a pleasure and privilege to watch them come together against the biggest, most talented and most expensively assembled clubs in the land in recent weeks. The commentator assigned to the Manchester United match pointed out that Wigan’s entire starting XI costthe club  less than United’s Spanish goalkeeper David De Gea.

It’s now four wins out of five, including Liverpool, Arsenal, Manchester United. The 2-1 loss against Chelsea famously involved two offside goals. This is quite simply the best run of results and performances Wigan Athletic has seen at this level.

The defending had been absolutely terrific. Maynor Figueroa played the perfect match yesterday. Caldwell and Alcaraz were outstanding. Boyce and Beausejour plugged the wings. McCarthy and McArthur put in their usual shift. Di Santo works as hard for the team as any striker in the league.

No injuries or suspensions. Arsenal fouled us more than we fouled them.

Ironically — save for the goals — the first half was one of our weaker performances for a while. Understandable, playing away against an in-form Arsenal side. But the passing was at times sloppy, and we rode our luck in the period after Vermaelen’s goal.

If you’d told me we’d get 6 points from 9 against Chelsea (away), Man United (home) and Arsenal (away) — with each of these clubs under pressure to get results for the title or a Champions League place — I wouldn’t have known how to respond. All the frustration from good performances earlier in the season that went without reward has been channeled into these characters wearing Wigan shirts. Their focus, determination, and talent is a delight to watch. Hard to imagine a prouder moment as a Latics supporter.

That said, we’re not quite there yet. The league table looks rosy, with Wolves pretty much already down and Blackburn six points behind, an inferior goal difference, and Chelsea and Spurs away in two of their last four matches. QPR also have a very difficult run-in against Chelsea, Spurs, Stoke and Man City — but like us, have produced results against the big teams that they have struggled to obtain against weaker opposition. Bolton may escape, with six winnable games to play, though they will have to improve dramatically. We face in-form sides Fulham and Newcastle, before a big one away at Blackburn, and Wolves on the final day of the season. Based of our rivals’ fixtures, three more points should do it. But there are surely a few more twists and turns to come. Lets hope Roberto’s men can maintain their superb form for another unforgettable end-of-season flourish.

Ali Al-Habsi: 9 — Made one amazing save from a Benayoun header, and several more important blocks throughout the game. Missed a punch for one scary moment in the second half, but the man is in inspirational form. He gives his the defense and team confidence from the back.

Antolin Alcaraz: 9 — Classy, strong defender in the best form of his Wigan career.

Gary Caldwell: 9 — Did what no one else in the league has been able to do this season — kept Van Persie quiet. The Dutch striker, in jaw-dropping form of late, was limited to a couple shots from outside the box.

Maynor Figueroa: 9.5 — Hard to single out a man of the match in such a team performance, but if there is one it was him. Five or six breathtaking sliding challenges, all perfectly timed, to deny Arsenal goal-scoring opportunities. Excellent in possession, and cool as you like bringing the ball out of defense. Even managed to contribute what might have been an assist for a third goal from a long throw-in. We’re docking 0.5 points for the dangerous challenge on Theo Walcott in the second half that might have led to a red card, if a foul had been given.

Emmerson Boyce: 9 — Fantastic defensive performance. In truth, the wing-backs ended up playing more as traditional full-backs in this match. Boycey’s tackling and work-rate was great.

Jean Beausejour: 9 — Looked less comfortable in possession than usual, but did some amazing defending, keeping Theo Walcott under control most of the match. Showed he can defend.

James McArthur: 8.5 — A bulldog in midfield. Was everywhere.

James McCarthy: 8.5 — Started the attack that led to the first goal. Made one mistake that could have proven costly, but put his usual hard-working but shift in, with a touch of class in his passing here or there.

Jordi Gomez: 9 — Many were concerned when Shaun Maloney’s absence was confirmed, but the Spaniard responded by setting up Di Santo for the first goal, and scoring the second himself. Squandered a real chance in the second half, but made a crucial contribution.

Victor Moses: 9 — Ran rings around Arsenal, as he had done to Manchester United and Chelsea before that. Finishing still needs a bit of work, although his cross for the second goal was great, as was the lofted ball he played Jordi in the second half.

Franco Di Santo: 9 — Very pleased for the Argentine, who finally got the goal his effort and skill deserved. Brilliant target man play, rarely loses the ball. Rodallega is going to have a hard time breaking back into this lineup.

Roberto Martinez: 10 — When things were looking very grim indeed, towards the end of 2011, our manager decided to temporarily scrap his beloved 4-5-1 / 4-3-3 for a wing-back system that can look like a 3-5-2 or a 3-4-3 depending on the players on the pitch. It immediately produced improved performances, most of which ended frustratingly in draws. But he stuck to it, brought in a player who truly specializes in that wing-back position, and has enjoyed the amazing improvement since. Roberto said we would beat Manchester United this season, that we would shed that “mental block” against the big teams. He was right.

Conor Sammon: 8 — Great sub appearance, running around like a madman but also looking a useful outlet up front.

Mo Diame: 9 — Really enjoyed his 10 minutes on the pitch, skipping and dancing past Arsenal players as though they were training cones. Might have done better with an injury time effort — or might have walked it to the corner flag to ease our nerves! — but he is one hell of a useful substitute to bring on.