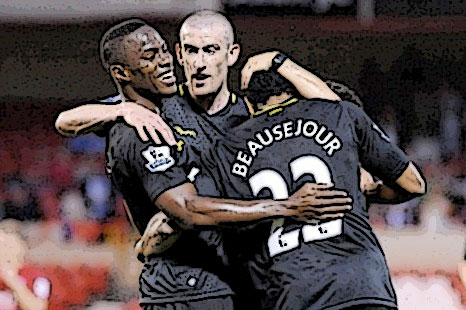 One of the criticisms often leveled at Roberto Martinez’s Wigan Athletic teams is that they cannot finish. Four brilliantly executed goals destroyed their Championship opponents in this match.

Forest had dominated the early proceedings. However, in the 25th minute Ronnie Stam went on one of his foraging runs down the right and whipped in a trademark cross. It cut out the goalkeeper and defenders but not Mauro Boselli, who nipped in to score an opportunist header. How often last season Stam had played similar balls in that nobody capitalized on. The goal shocked Forest and more were to follow. Suddenly there were acres of space in midfield and classy Latics took full advantage. Watson and Jones started to dominate the centre of midfield, with their silky skills and high workrate, linking up well with the forwards and the wing backs.

Roberto Martinez had kept only four players from the team that had started at Southampton, and all at the back: Al Habsi, Ramis, Figueroa and Alcaraz, who was captain for the night in the absence of Caldwell. Ramis was to move to the centre of the back line of three, with Figueroa taking up his now more familiar position left of centre. There were two specialist wing backs in Stam and Beausejour, Watson and Jones in central midfield and Gomez, Crusat and Boselli further forward.

Latics were to add to their tally on the 35th minute mark when Maynor Figueroa hit an absolute screamer from 30 yards, the ball flying across goalkeeper Camp into the far corner of the net. This followed nice approach play by Crusat and Watson. Forest defender Halford could be faulted for not making sufficient effort to block Figeroa’s shot, but it was a truly stunning strike. Latics made it three a minute before half time when Jordi Gomez hit a right-footed rocket past Camp, after receiving from Crusat 20 yards out. Even before then Gomez had gone close a couple of times and Boselli had two clear penalties not given. One was a handball in the area, the second when he was pushed when in a goalscoring position. The Argentine was also unlucky with a clever flick that would have put Crusat clear, but for a deflection.

The second half started and Forest were starting to recover from the shellshock of the last 20 minutes of the first half . After only two minutes had passed Simon Cox got them back in the game with a spectacular 30 yard shot. They started to press, pushing Wigan on the back foot. Latics seemed content to defend and hold their lead. Callum McManaman came on for Jordi Gomez after 72 minutes. Antolin Alcaraz carelessly got himself a second yellow card with a trip on Moussi in the 78th minute, but the defence held resolute. A couple of minutes later Ryo Miyaichi came on to make his debut in place of Albert Crusat. Fraser Fyvie was also make his competitive bow three minutes later for Mauro Boselli.

As the match was winding down Miyaichi revealed his blistering pace, passing inside the box the Callum McManaman who made finishing look easy, side stepping his marker and coolly placing the ball past Camp.

Wigan Athletic’s performances in cup competitions in the Martinez era have been poor in the past. It had seemed like the players had not been interested. This was not the case here. Martinez smartly chose a team with a strong backbone in defence, with a good balance in midfield and upfront. The players showed commitment and at times they looked almost as classy as the first choice lineup at Southampton last weekend. Latics clearly have strength in depth and their now well-established style of play makes it easy for players to step in. Everybody knows their role and there are at least two players seriously challenging for selection in all eleven positions.

Up front Latics look in really good shape. There are three central strikers of varying styles, but each one a quality player. In this match Mauro Boselli led the line with skill and effort, getting into good positions and meriting his opportunist goal. The arrival of Ivan Ramis has given Latics another quality central defender, so necessary when one of the three regulars gets injured or is suspended.

What a shame Alcaraz made a reckless challenge to get his second yellow card and get sent off. He has a great technique and is physically strong. His career at Latics has been dogged by injuries and sometimes reckless decision making. At his best he is one of the classier central defenders in the division.

Ali Al Habsi: 7 – solid and did what he needed to.

Antolin Alcaraz : 7 – played well until his sending off.

Ivan Ramis: 7 – looked a natural in Gary Caldwell’s role. Quickly getting accustomed to the pace of the English game.

Maynor Figueroa: 9 – notwithstanding his spectacular goal he has developed into an excellent central defender. His positional sense and power make him a fine player. Outstanding performance.

Ronnie Stam: 8 – as always attacked with verve, his crosses being menacing for the opposition defence. Worked hard in defence.

Jean Beausejour: 7 – a class act as a wing back. Performed his dual role in defence and attack with his usual diligence.

Ben Watson: 6 – worked hard and showed his class. At times seemed to be trying too hard, hitting ambitious passes that did not quite come off. More to come from him, given the chance.

David Jones: 7 – that cultured left foot together with a high workrate helped him make a good contribution.

Jordi Gomez: 8 – excellent passing and posed an attacking threat. His right footed rocket shot for his goal was a surprise to us all. Let’s see more of that Jordi!

Mauro Boselli: 8 – led the line with skill and panache. Looked dangerous and linked up well with teammates.

Albert Crusat: 6 – not his best match but he put in some nice touches. The best is yet to come from the diminutive winger.

Callum McManaman – took his goal with such coolness and self confidence. Has been unlucky not to be given more opportunities in the past.

Ryo Miyaichi – impressive in his brief time on the pitch. This speed merchant could have a key role this season, especially in the closing stages when the opposition tires.

Fraser Fyvie – not on for long, so hard to judge. Clearly one for the future.