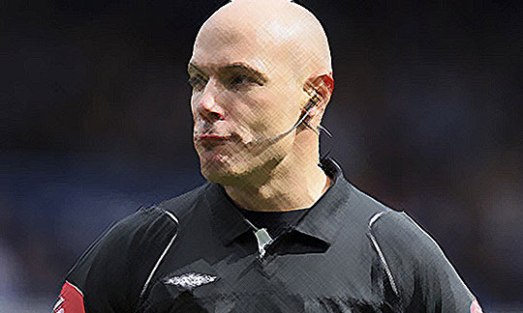 When I was younger my father used to say the benchmark of a good referee is how little you notice them, and yet whenever the World Cup Final referee Howard Webb is on the pitch, he appears to seek the exact opposite. You get the sense he enjoys the jeers from the terraces because they acknowledge his role as a protagonist. Indeed Sunderland fans spent much of the first half booing him after he correctly awarded a series of non-consequential professional fouls Wigan’s way. And he repaid them, true to form, by harshly dismissing Jordi Gomez and then ignoring worse tackles the other way.

Saturday’s 1-0 loss was a familiar story for Wigan Athletic, left to rue their excellent early chances after Webb’s decision-making effectively killed off the match. Roberto Martinez, a diplomat and gentleman not noted for vocal dissent, has now raised his voice twice in the last three league fixtures. In this instance, it was the sending off of Jordi Gomez — the least likely player on the pitch to deliberately injure another — that swung the game. It was a clumsy challenge, albeit studs up and therefore a defendable dismissal by the letter of the law. The chief complaint is not about the red card itself, but the double-standard when Seb Larsson and James McLean tried their hardest to join Gomez later in the match — with a nastier tackle and string of yellow card infractions respectively.

Latics deserved to be up at half-time. James McCarthy’s early burst into the box resulted in a one-on-one that Mignolet somehow kept out. Jean Beausejour’s sensational skill and cross for Arouna Koné should have made it two. McCarthy was again unlucky with a viscious drive later in the half. Meanwhile, Sunderland were limited to set pieces and couldn’t find a way to break the defence down.

McCarthy’s performance was exceptional. He has been given license to venture forward in the last couple fixtures, and has the fitness to do so without neglecting his defensive duties. His technique is wonderful, and if he gets in shooting positions two or three times per match, the goals will come.

Maynor Figueroa’s first half passing stands out, despite the windy conditions. Despite being reduced to 10 men for half the match, Latics had the same number of shots, an equal amount of possession as their opponents, and the most clear-cut chances. The first half overall, was very heartening.

This is the second game in a row where excellent chances have been created not been converted. Koné is getting in decent positions, but failing with his final shot. You do get the sense he is a confident finisher and will come good. But Mauro Boselli must have been frustrated to see those early chances go to waste after his brace at West Ham earlier in the week.

The substitutions came too late. It had been clear for much of the second half that Latics were not getting anywhere with 10 men, even after Di Santo came on. When McManaman and Miyaichi were finally introduced, there was an immediate injection of energy and urgency, if not any actual clear cut chances.

Ali Al-Habsi: 7 — A little wobbly on a windy day and Seb Larsson’s dangerous crossing. But kept the ball out and can’t be faulted for the goal.

Ivan Ramis: 6 — Gets better every match, although he did get beaten for pace on a couple occasions.

Gary Caldwell: 6 — Resorted to hoofing the ball in the second half, which is unlike him and suggests desperation.

Maynor Figueroa: 6.5 — Some fantastic passing in the first half, but the cross for the goal came down his side.

Emmerson Boyce: 6 — Solid but not as much attacking thrust as Jean Beausejour on the other side. Having said that, more goals against seem to originate on the left, which is testament to the defensive solidity Boyce adds on the right.

Jean Beausejour: 7 — If Koné had managed to beat Mignolet with the far post tap in, Beausejour’s piece of skill that provided the chance would have gone down as the assist of the season. Faded as the game went on though.

James McCarthy: 8 — Imposing performance by a player who is coming into his own. Has been unlucky not to score in the last couple matches. If he adds goals to his game he will be complete, and unfortunately probably gone to a top four club not too long after.

Shaun Maloney: 6 — A few useful touches in the first half, but unable to impact the match as he has in the past. Substituted after Jordi’s red card.

Jordi Gomez: 5 — Of the two playmakers, he was actually having the better day, drifting in and out of dangerous positions and playing a lovely dinked through ball for Koné in the first half. But his lunge was unnecessary and the red card that ensued essentially lost us the match.

Arouna Koné: 5 — Didn’t have a tremendous amount of service, but fluffed his lines with the chances he had. Credit to Mignolet for an astonishing save, but we need our strikers to bury those chances. His opposite number, Steven Fletcher, only got on chance, a difficult one at that, but won them the match.

Franco Di Santo: Unable to get on the ball and influence the match.

Ryo Miyaichi: When he comes on, he sees a lot of the ball. Which means he wants it and is asking for it, but also that his teammates believe he can make something happen.