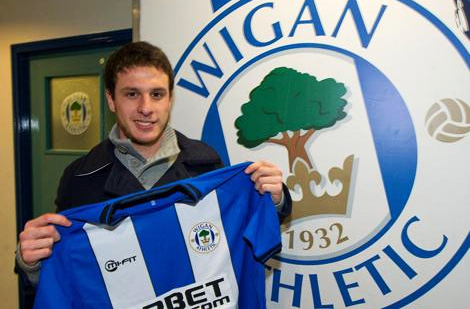 The 18-year-old’s arrival is intended to supply cover for Arouna Koné while the Ivorian takes part in the African Cup of Nations over the next few weeks. He has yet to make an appearance for Manchester United, but it has been suggested that Sir Alex was keen to get him some Premier League experience as soon as possible. Indeed, it has been said that it was Ferguson who approached Martinez about the possibility of the loan upon learning that Wigan would have a void to fill — possibly a benefit of Tom Cleverley’s well-documented spell at the club.

Interestingly, Chileans are not too pleased with the move as Henriquez was due to star in the South American under-20 championship but was blocked from traveling by his parent club. Henriquez has an outstanding goal-scoring record at all levels for Chile including 14 in 10 matches for the u-20s, and 1 in 1 for the seniors. It should be noted that youth tournaments of the sort are highly valued in South America and his absence will be big news.

Chile’s loss is Wigan’s gain, and the fixture list could not have been kinder. Saturday’s FA Cup fixture against third tier Bournemouth provides an excellent opportunity for the lad to get a first appearance under his belt, familiarize himself with his surroundings, and show his new club what he can do. Countryman Jean Beausejour and the legion of Latin Americans — not least Franco Di Santo, who was plucked from the Chilean league at a similar age as Henriquez five years ago.

All things considered, he looks a decent loan signing. In addition to his international debut goal from a substitute appearance, he scored 11 in 17 in the Chilean league at age 17. His goal-scoring record suggests more of a centre-forward or poacher type of player, allowing Di Santo to continue in his slightly more withdrawn playmaking striker role.

His arrival does, however, pose a number of questions. Will he leapfrog Mauro Boselli in the pecking order, who has probably been eagerly awaiting the African Cup of Nations for his chance? Will Roberto keep his formation intact with the use of two traditional forwards, or instead opt for Jordi Gomez or Callum McManaman in behind Di Santo? I suspect much hinges on the Chilean’s debut — and the performances of his aforementioned teammates and competitors — against Bournemouth this Saturday.