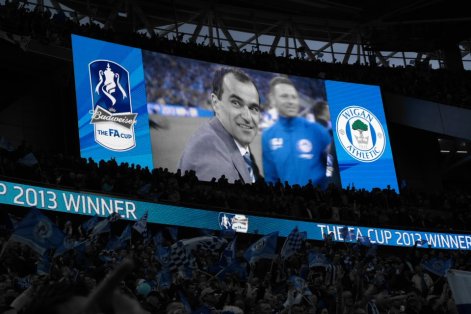 Last summer  Indonesia played a friendly against  Inter Milan in the Senayan Stadium in the centre of the city.  One expected to see the red and white colours of Indonesia in that ground that holds 65,000 people, but probably around 70% of the crowd wore the blue and black replica shirts of Internazionale. They had not traveled from Milan, but had traversed through the horrendous traffic of this huge city, wearing shirts that they had in their wardrobes.

Inter shirts are popular here and so are those of arch rivals AC Milan. However, the most common are those of Barcelona and the English giants – Chelsea, Liverpool and Manchester United.  Wigan Athletic shirts are not yet apparent on the Jakarta streets, but might well make an appearance soon.

The Daily Express claims that 500 million people  watched the FA Cup Final, with over 100 countries having television rights to the match. You can add to that a few more million who watched the match through p2p channels on the internet. 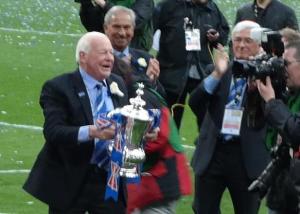 Great photo from Nathan Peters. Who could have deserved this more than Dave Whelan?

Yesterday there was big buzz here. Latics’ win captured the imagination of the Indonesians, who are fascinated by the concept of a club the size of Wigan Athletic winning the FA Cup. They want to know more about the club and its history.  In a country of 260 million people you will have a lot of followers even if only a small proportion of them decide to join your side.

When I took my wife out yesterday to one of those giant air-conditioned shopping centres they have here I wore a Latics shirt. As soon as I walked in my shirt was the focus of attraction. Wigan Athletic are now famous, even in a city more than 7,000 miles away from Wigan. 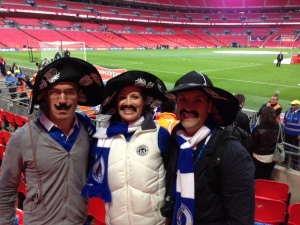 The Three Amigos at Wembley

I wish I could have been at Wembley on Saturday, but it was just not possible, with an impending move to another country coming up. However, the Amigos were represented –  my son and fellow writer Ned and his wife Kathleen flying across the Atlantic to watch it. They were joined by a third amigo in son-in-law,  Nate, who grew up on American football in Iowa, but has become a Latic fanatic.

Yesterday’s  Premier League results were like a dousing of cold water for Wigan Athletic fans. Latics now need to win at Arsenal on Tuesday and at home to Aston Villa to stay up. They were never easy games in the first place, but making Wigan play at the Emirates only three days after a cup final is just not fair. The odds have always been stacked against Latics, but the club is resilient and keeps bouncing back.

Whatever happens in the two league games it cannot detract from a wonderful cup final win. If anything has helped the image of the club it is the style in which the Wigan selection overcame a star-studded Manchester City team.

They have won admiration from all over the world, perhaps even among the most fickle of football people in their own country.