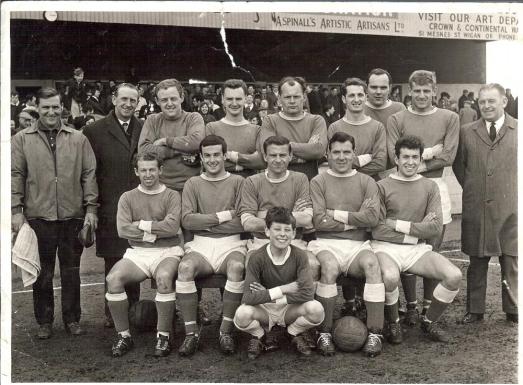 A couple of weeks ago at Blackpool with Latics a goal behind, Owen Coyle made a bold move.  He already had two wingers on the field, Callum McManaman and James McClean, and decided to boost  Latics’ attack further by bringing on  two central strikers, Grant Holt and Marc-Antoine Fortune.  For a while Latics played in a formation akin to  4-2-4.

Seeing what was happening my mind drifted away to when I was a teenager watching Allan Brown’s team destroy rivals using that 4-2-4 system.

Brown took over at Wigan as player-manager in 1964 with a mandate to win the Cheshire League title. Latics had finished in mid table the previous year and it was obvious that a transformation was required. Brown and the Latics’ board at the time certainly meant business as they took the radical step of bringing in full-time professionals to give them a big advantage over the other clubs who use part-timers or amateurs. On top of that Brown brought in a 4-2-4 system, which was to reap high dividends.

As a teenager I was thrilled to get Brown’s autograph and those of his full time squad, who he would often take to the Roy Café in the centre of Wigan, where my mother worked. Sometimes I would even get a free ticket to the match.

s played an orthodox 4-2-4 system like the one Brazil had used to win the 1958 World Cup. They had a flat back four with two ‘halfbacks’ – usually Dennis Crompton and Brown himself –  in the centre of midfield. Crompton was the ball winner/water carrier and Brown the number 10 who would put the passes through to the forwards, scoring goals himself in the process.  Wingers Les Campbell and Walter Stanley were there to supply crosses to the central strikers, although they did do a share of defensive duties.

Latics were to take the league title from Macclesfield, who were to finish five points behind. Wigan scored 121 goals in 42 matches, most of them  down to central strikers Harry Lyon and Carl Davenport. With such an emphasis on attack they needed a defence which could hold its own when the half backs and strikers got stranded upfield and the opposition counterattacked. The superb Derek Houghton was at right back and Roy Wilkinson on the left. Ex-paratrooper Alf Craig was a rock in the centre of defence alongside the elegant Ralph Gubbins.

In 1966,  during Brown ‘s tenure at Wigan,  Alf Ramsey’s “wingless wonders” won the World Cup with midfield players – Alan Ball and Martin Peters –  playing in the wide positions. The 4-4-2 system he used was eventually adopted by most English clubs for years to come.  It provided more defensive cover with the wide players being regarded as midfield players, helping the attack and shielding the defence.

In recent years both Paul Jewell and Steve Bruce successfully used 4-4-2 at Wigan.

Whether Owen Coyle would call the system he briefly played at Blackpool 4-2-4 or 4-4-2 is academic. One system reverts into the other depending on the degree to which  the wingers/wide midfielders roles are focused on attacking.

There were times at Blackpool when both McClean and McManaman were both thrust into largely attacking roles. 4-2-4 is a dangerous ploy these days when a single goal can so often determine the final result.  Although it gives powerful attacking options it leaves the defence light on cover.

What a breath of fresh air it was to see Coyle attacking with two wingers and two central strikers. However, the wingers are only going to be effective if they get the ball. Too often the ball is launched long to the central strikers, cutting them out.

It is interesting how Latics’ regular wide players are listed on the club website. Both Jean Beausejour and James  McClean are regarded as midfielders, whereas Callum McManaman is listed as  a forward. One wonders how they will categorise Marc Albrighton.

One of the strengths of Allan Brown’s team was their consistency of approach. All players coming in knew the 4-2-4 system they had to fit into. The same could be said about Jewell’s and Bruce’s 4-4-2. Roberto Martinez was a tactical innovator, but his teams had a clear purpose, if they found it difficult to implement against star-studded opposition.

If there is one main criticism of Owen Coyle’s reign so far it has to be that there is no tactical blueprint of that type.

Moreover his wide players have not consistently delivered the goods in the opponent’s penalty box. Part of this is down to a lack of good form on their part, but too often their defensive duties have limited their scope in attack.

We will have to wait and see if the Wigan Athletic defence is going to be strong enough to allow the wide players to adopt a more attacking role. When that happens strikers like Holt and Fortune are going to get goals.