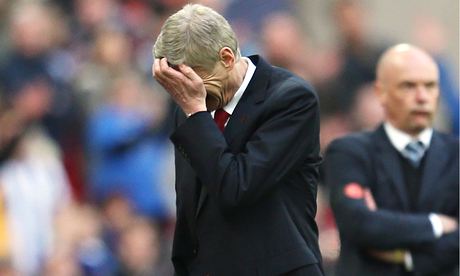 Wigan Athletic gave as fine a performance as one could possibly expect, despite going down 4-2 on penalties to Arsenal after extra time. The leaps of joy from the Arsenal players on winning the shootout was testimony to the relief they must have felt. Latics had been leading until the 82nd  minute when a miskick led to a Gunners goal. It is a testimony to Uwe Rosler’s game plan and the commitment and quality shown by his players that they were only minutes away from another Wembley final.

Rosler surprised us by fielding a flat back four with Emmerson Boyce and Ivan Ramis in the centre of defence and James Perch and Stephen Crainey at full back. James McArthur, Josh McEachran and Jordi Gomez lined up in midfield, with Callum McManaman and Jean Beausejour nominally supporting Marc Antoine Fortune up front.

Arsenal put early pressure on Latics, particularly on the right where Oxlade-Chamberlain looked dangerous. He produced a superb cross that Sanogo headed towards goal, Carson making a terrific reflex save. However, after that initial 15 minutes Latics were starting to look more composed and their game plan was stifling their expensive opponents.

Sagna hit the ball wide after Vermaelen had headed a corner in his direction after 26 minutes, but Latics continued to fight their way back into the game, looking more composed. Callum McManaman was looking lively and he put a good effort just wide after cutting into the penalty box. Jean Beausejour had dropped back to cover the danger from Oxlade-Chamberlain and James Perch was giving Podolski no breathing space on the other flank.

Latics continued to frustrate Arsenal as the second half progressed. Their pressing in midfield nullified the passing movements one normally expects from the Gunners and Latics were playing composed football. Sensationally Latics were to gain a penalty in the 63rd minute as McManaman was tripped by Mertesacker as he sped across the penalty box teeing up a shot. The penalty was delayed with the injured Monreal being taken off, but Gomez showed great temperament by dispatching the penalty past Fabianski. Ironically he placed it to the right of Fabianski in a similar way to the one that was saved at Bolton, but it was good enough to beat the Polish ‘keeper.

A minute later Rosler took off McEachran, bringing on Jack Collison. Four minutes after that he took off McManaman, who had been Latics’ most dangerous player, for Nick Powell. Arsenal brought on Giroud for Podolski and started to play a more direct game, putting Latics under pressure. Sagna headed against the post, then Carson made a superb parry from a Gibbs header, with Crainey somehow clearing it off the line.  Sadly Latics’ defensive heroics were undone eight minutes from time when the unmarked Mertesacker headed in a scuffed shot from Gibbs.

The excellent Ramis limped off after 86 minutes to be surprisingly replaced by Gary Caldwell, with Leon Barnett remaining on the bench. It was the club captain’s first senior outing for close on a year. Latics held on in the closing minutes of normal time.

Extra time was a cruel consequence for a Wigan Athletic outfit that had already played more games than any other team in the country. However, they maintained their organization and composure in extra time despite close calls with Carson making a fine save from Sanogo and Oxlade-Chamberlain hitting the underside of the crossbar.

The match went to penalties, but Latics just did not have the depth in that department. Caldwell and Collison had the first two penalties saved and although McArthur and Beausejour dispatched their’s with aplomb, it was not enough, as the Gunners scored four out of four.

A superb display, brilliantly choreographed by Rosler. As at the Etihad in the previous round he got his tactics just right and Latics were within a whisker of pulling off a spectacular victory against great odds.

The defence was superb with Boyce and Ramis showing their class and composure. The midfield worked so hard to nullify the Arsenal threat.

McManaman was back to his best, clearly enjoying his return to Wembley.

Rosler stuck his neck out by putting in Carson for Al-Habsi, but the Cumbrian was superb. The German did it once again by bringing in Caldwell to replace Ramis, but the Scot did a fine job in defence.

The performance cannot be faulted. However, taking off McManaman so early in the proceedings took some pressure off Arsenal, even if he was suffering from cramp.

Rosler was not in a position to name five good candidates for a penalty shootout. If Ramis had not gone off, maybe Shaun Maloney would have come on and he has shown his skills with penalties in the past. Both Caldwell and Collison were brave in stepping up for the first two, but their efforts were saved. Why the self-assured Powell did not take one is hard to understand.

Emmerson Boyce: 8.5 – marshaled his defence superbly, looking a class player in the process.

Ivan Ramis: 8 – another quality display. Let’s hope his injury is not serious.

Stephen Crainey: 8 – a fine display. He has been improving game by game under Rosler.

James McArthur: 8 – a typical display from this fine player, full of industry and cultured passing.

Josh McEachran: 7 – so busy protecting his defence and not wasting the ball. A pity he had to be taken off. Taken off after 68 minutes.  One wonders when he will be fit for the full 90 minutes.

Jordi Gomez: 8.5 – excellent in all areas, covering so much ground and keeping possession under pressure.

Callum McMananan: 8 – looked like the player who electrified Manchester City last year. Let’s hope he can do this again in what remains of the season. Taken off after 64 minutes.

Marc Antoine Fortune: 7 – worked hard despite being so closely marked.

Jean Beausejour: 7 – the threat on Arsenal’s right flank kept him pegged back. In reality played a midfield, rather than a forward,  role.

Nick Powell: – could not stamp his mark on the game.

Gary Caldwell: – did well after such a long absence.