Given that we now have a wider readership than in our earlier days we plan to occasionally republish articles from our archives, that many may not have seen. We ask our long-established readers will bear with us on this. We will continue to put out our stream of current articles.

Our site stats have shown that our readership has been particularly interested in perspectives of Latics players from fans of their previous clubs. Thanks to contributions made by bloggers on the fan sites of those clubs for these articles from our archives.

Click here for our previous fan views on Roger Espinoza and James McClean.

Click here for our previous fan views on Martyn Waghorn and Thomas Rogne. 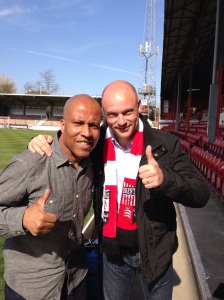 Billy and Uwe at Brentford

I remember exactly where I was when Wigan made an approach for Uwe Rosler. I was setting up the equipment at Hounslow Civic Centre for Beesotted fanzine’s first ever live YouTube video broadcast.

’I was a little surprised that he dropped down a division into the Championship – although a two-year contract was more than Albion were offering.

Fortune was a good player at Albion – although the more I think, I struggle to remember any real outstanding performances or memorable moments from him. He was always a hard working individual and a team player. But, If I’m honest, he probably lacked that extra bit of quality you need to excel at the highest level.

When he originally joined the club under Tony Mowbray we were desperate for a striker. He joined in January and did well. He scored 5 times in 17 appearances. I remember his debut against Middlesbrough and he ran himself into the ground. He trundled off to a standing ovation with his socks around his ankles. Fortune’s link-up play has always been good. However, he never really offered a goal threat. I wouldn’t say he’s a natural goalscorer – despite his goals from January to May. He was unable to prevent the club from being relegated.

When Fortune came back to the club after a spell in Celtic, he never really reached the level of performance he had when he was at the club the first time around. In fact, he struggled to get in to the side first under Roberto Di Matteo and then Roy Hodgson. His time at The Hawthorns seemed up. He went on loan to Doncaster Rovers in order to get some game time and he came back with renewed vigour and purpose. By this time, Hodgson had moved Fortune away from the centre to the right-hand side.

Marco was intelligent enough to adapt his game and did well as a right-sided forward. He always tracked back and put the required effort in. In fact, he earned himself an extra year at the club. But once Hodgson had moved on he found it difficult to get in the side under Steve Clarke. The arrival of Shane Long, Romelu Lukaku and Markus Rosenberg meant that Fortune wasn’t even considered in a central option any longer.

Fortune didn’t really feature in the first half of last season as Peter Odemwingie and Zoltan Gera kept him out of the side. But, as both either dropped out of favour or were injured, he got his chance to earn himself another deal. He performed well and scored the odd goal. Albion earned him a one-year contract, but he chose more stability at Wigan.

I don’t think you’ll find any Albion fan which would have a bad word to say against Fortune. He maybe lacked the quality to perform regularly at the highest level, but he always tried his best and was liked by the fans. Hopefully we’ll see him at The Hawthorns again soon.