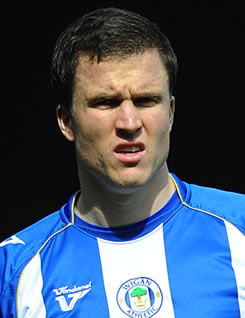 The news that Gary Caldwell has signed another contract for Wigan Athletic has been greeted with mixed reviews by fans on the social media and forums.

For the majority Caldwell is an icon who has gained their respect through his sheer positivity and dedication to the club and some even see him as a future Latics manager. For a vocal minority he is ‘Calamity Caldwell’, whose spectacular mistakes have outweighed the good things he has done, as they see it.

Caldwell’s new contract as a player/coach is only for a year, but it provides Uwe Rosler with further cover in the centre of defence, where competition for places will be intense. Rosler already has Leon Barnett, Emmerson Boyce, Rob Kiernan and Thomas Rogne at his disposal plus Ivan Ramis, if he remains at he club. However, Rosler often operated a back line of three central defenders last season, so although Caldwell is unlikely to be a regular starter he will be an important member of the squad.

When Caldwell’s contract finished this summer there were many who thought he would never play for the club again. How much longer could he defy the odds and continue to play following two sessions of major hip surgery less than three years apart? It was a surprise to many that Caldwell back in action at the end of last season, following eight months out of action following his hip surgery.  His return had been delayed by receiving calf and Achilles injuries after getting back into training.

Caldwell was to reappear as an 86th minute substitute for the injured Ivan Ramis in the FA Cup semi final against Arsenal. Given his lack of match fitness he did remarkably well in those closing minutes of regular time, plus the 30 minutes of extra time. The penalty shootout that was to follow was going to be a tough one for Latics with so few recognized penalty takers remaining on the pitch. Caldwell stepped up to take the first, but his effort was saved and brave Latics were to lose the shootout. Once again public opinion was divided for and against the Scot, but most fans admired the way in which he stepped up to take the responsibility for that first kick, even though it did not prove successful.

Caldwell played further games against Birmingham and Blackburn before the Championship playoff semi final confrontations against QPR. The Scot acquitted himself well in the home draw and continued to do so until the 73rd  minute in the return match at Loftus Road. With Latics 1-0 up he lunged into a tackle just inside the box and Junior Hoilett went down for a fateful penalty which was to swing the game in favour of the home team and kill Wigan’s dream of a return to the Premier League.

Caldwell freely admits that his career at Wigan has had its ups and downs. However, he has spent four and a half years with Latics:  a longer stay than at any of his previous clubs. He said recently that “I’m proud to have been part of a great club, a real family club and one I feel a real part of. I’ve had a lot of highs and a lot of lows, but I feel like I’m part of the club and I really enjoy being here.” Rosler clearly rates Caldwell highly as a positive force within the club and his involvement in coaching is something that could prove mutually beneficial for both the club  and the player.

Ups and downs Caldwell has certainly had, not only at Wigan, but throughout his career. He is the kind of player who will put his body in the firing line. This has meant he has made some amazing blocks of goalbound shots, but then the flipside can be when the ball deflects off him and puts his goalkeeper and fellow defenders off guard.

In May 2009 Caldwell was voted the Scottish League Football Writer’s Player of the Year. The Daily Mail quoted the 27 year old Caldwell as saying ‘I think I can still improve. I feel as fit as I’ve ever felt. They do say that, nearer to 30, as a centre-back the experience you’ve gained over the years can help you…..I feel I’ve got better every year and that’s what you have to do.’ Caldwell was to reach 30 in April of the 2011-12 season, when Latics had a string of amazing results against the elite clubs of the Premier League. His performances during that month were outstanding and helped Wigan keep their place in the Premier League. His goal at Liverpool is one that will stick in fans’ memories for years to come.

Caldwell had signed for Wigan on a four and a half year contract in January 2010. During that time his performances  have ranged from the excellent to the other extreme that might be called calamitous. He is the kind of player who polarizes fans. In his early days at Celtic, after arriving on a free transfer from Hibernian, he was given a hard time by a section of the Parkhead crowd who said he was not “Celtic class”. He won the nickname of “Heid” and the fans would sing a song about him. It took him time to win them over. A TalkCeltic.net forum in May 2009 asked fans if they thought Caldwell was Celtic class. The responses reveal how much he won over the majority of them.

In December 2011 Wigan Athletic were in the doldrums. Fans were getting frustrated and there was some strong talk passing around the fan forums and social media. Latics were at rock bottom and really looked like they were going to go down. People were targeting certain players, suggesting they were not good enough for the Premier League. Among those was the captain, Gary Caldwell. By the end of the season Wigan Athletic were 7 points above the relegation zone and Caldwell was voted fans player of the year.  Caldwell’s form was the barometer for the performance of the team. Put simply, when Caldwell played well, so did Latics.

Gary Caldwell has proved that he has the determination to succeed, despite the criticism he has received at various times in his career. It remains to be seen whether his body can cope with the demands of  a season playing in the physical Championship division. However, Rosler clearly believes he can continue to be a member of his playing squad and if Caldwell makes a success of his coaching role then he might well be involved with the club for years to come.

Like him or loathe him, he is not one to be ignored. Moreover he has an ability to persevere and win over critics.