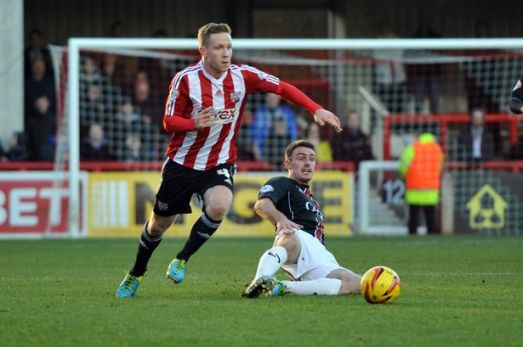 Rarely can a football club get as inflamed as Brentford have done these past few days. Wigan Athletic have made bids for Adam Forshaw that Brentford just don’t seem to appreciate.

“Warburton fumes as Brentford reject second ‘unacceptable’ bid from Wigan for Forshaw” was the headline in the London 24 newspaper a couple of days ago. So what is it about Latics’ bid for the ex-Everton youth player that has touched a raw nerve at the west London club?

Forshaw is clearly a key player for the Bees in their attempts to hold their own in a higher division. A 22 year old midfield player with a degree of elegance and skill, he was named League 1 Player of the Season. With Chris McCann and Ben Watson recovering from major injuries it is going to take a matter of months before they will be fit enough to challenge for a first team place again. Moreover Shaun Maloney did not play one minute in the pre-season matches. Rosler clearly likes to have a balance of experienced and young players in his squad and would see Forshaw as a good long-term investment for the club, given his age.

Manager Mark Warburton is quoted as saying “A bid is only a bid when it’s realistic. When it comes in and unsettles a player – that’s unacceptable. There’s been a second bid which is totally unacceptable.” He left Forshaw out of a pre-season friendly at the weekend against Crystal Palace because “the bid was unsettling for the player” and “he needed to go away for a couple of days to get his head straight.”

Wigan Athletic fans know all about their top players being courted by bigger clubs who do not hide their interest in the player they seek. It does not seem so long ago that Latics were receiving derisory bids for Victor Moses, but they hung in there until Chelsea eventually came in with a more realistic figure. A similar case happened with Charles N’Zogbia, who was certainly unsettled by interest from other clubs, but eventually stayed for another year and helped keep the club in the Premier League.

In effect all clubs outside the elite handful that dominate the Premier League are selling clubs. It is unsettling for a player when a bigger club takes interest in him because he wants to improve himself professionally and big clubs pay bigger salaries.

Being Player of the Year in League 1 is a great achievement for Forshaw, but there is no guarantee that he can perform to the same level in the Championship or the Premier League. Latics will be loath to pay out a big transfer fee for a player that is of yet unproven in their tier. Reports suggest that Everton will receive a sizeable chunk of the transfer fee if Forshaw does leave, having built an agreement into the deal they made with Brentford. It is rumoured that Brentford want £6m for the player, but Wigan’s first bid was £1.5m. Somewhere between the two figures would apppear realistic, but it is doubtful that Latics would stretch that far for a midfield player, given the need to strengthen other areas in the squad.

Clearly much of the Brentford venom has been aimed at Dave Whelan. He was the one who snatched Uwe Rosler from them at a time when they were on a high, with the announcement of a new stadium coming through. This time it is the Wigan chairman again, who in their eyes is trying to poach away their brightest young player without adequate compensation. Whether it is Whelan, Rosler, Jonathan Jackson or whoever else at the club who has been making the bids is academic. In the real world opening bids tend to start on the low side and gradually build up until a consensus is reached. Whelan might be a tough negotiator, but other labels currently being attached to him are clearly unfair.

But then again, do Latics really need Forshaw?

Much depends on the injury situation. Rosler tends to play with three box-to-box midfielders. Don Cowie has been brought in from Cardiff and can be expected to adopt the role previously held by Ben Watson, as an anchorman sitting in front of the back four. James McArthur is an automatic choice. In pre-season Rosler played new signing James Tavernier in midfield and his shooting, his quality crossing of the ball and ability at set pieces makes him an attractive proposition in the long term. However, Tavernier arrived at the club as a full back and only time will tell if he will develop into a quality midfielder. Should Tavernier not become a regular in midfield, Roger Espinoza is the obvious candidate for that third position. Rosler also has a revived Fraser Fyvie, loan signing Emyr Huws and under 21 player Tim Chow as possibilities in midfield.

The media has also reported Latics’ interest in Chelsea’s George Saville, who was on loan at Brentford last season. Were they to sign both Saville and Forshaw it would be interesting to see how Brentford reacted. Many Latics fans consider that Warburton over reacted to the bid for Forshaw, when it is not unusual for a manager to go back to his previous club for a player. They will also cite Whelan’s oft stated view that should any player want to move on to higher things from Wigan, he would not stand in his way, providing the price were right.

Two questions remain. Would Latics be willing to pay £3m-£4m for an extra midfield player and one who has not proved himself at Championship level? Is Rosler seeking more midfield cover because one of his current squad might be leaving?

If there is a number one priority for adding to the squad it surely lies in the acquisition of another central striker. Would those funds be better used in that area rather than spending it on Forshaw?