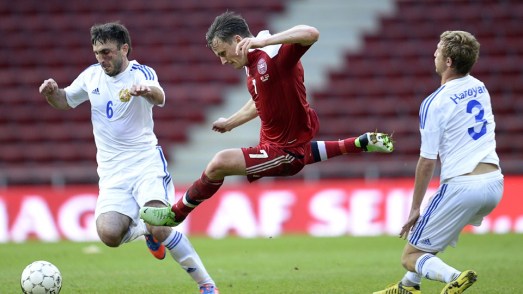 William Kvist in action against Armenia.

William Kvist is a highly experienced defensive midfield player who Latics have signed on a one year contract following his release from VfB Stuttgart. The 6 foot tall Dane is 29 years old and appears to be the right sort of player to play in front of the Latics defence. Kvist made 8 appearances on loan at Fulham in the second half of last season.

“I love to protect the back four, stay compact, I’m hard-working and a team player – I look to protect the balance of the team as a defensive midfielder. I make interceptions and then try to play the ball as quickly as possible to the players who can make things happen offensively. I didn’t score a goal in Germany and I would expect too much in that regard but defensively I love to defend for the team and make good, quick passes to the attacking players.”

Kvist started his career in Copenhagen where he won five Superliga trophies and was Danish Footballer of the Year in 2010 and 2011. After having considerable experience in the Champions League with FC Copenhagen he joined VfB Stuttgart in 2011, playing in the Bundesliga for three years.

In order to find out more about William Kvist we reached out to Mark Bjerremand through Twitter (@mfbjerremand). Mark is an avid Danish football fan.

Here’s over to Mark:

I’m just a fan of football and I’m Danish so I obviously follow Danish football. What I am writing about is my knowledge and impressions of William Kvist. If anything I am more interested in the person behind – the human being – more than the player.

It says something about the faith that Denmark coach Morten Olsen has in Kvist, that he was named captain of the Danish team that beat Armenia on Sunday in the European Championship. Kvist has played almost 50 games for Denmark. Kvist has been in the starting eleven for the national team for the past four years.

William Kvist played his first game for FC Copenhagen in 2005. He played in a variety of positions. He worked very hard to get into the Copenhagen team to begin with. He was played as a fullback and did really well (also for the national team). However, he wanted to play as a central midfielder and slowly he worked his way into the starting eleven and became captain for the Copenhagen team back before he left for Stuttgart in 2011.

His real breakthrough for Copenhagen was in a playoff match for the Champions League against Ajax Amsterdam – his shot rebounding off a defender for the winning goal. He had been very much involved as a very young player at the time, playing fullback. It was a huge surprise that Copenhagen beat Ajax – they were down 1-0 on aggregate (from their home match).

Kvist is an intelligent guy. – he studied business economics when he played for FC Copenhagen. And he is also alternative in his approach to football. He’s got his own personal coach and he uses hypnosis and is conscious about nutrition. For the European competition in 2012 he brought his own juice presser to press his own beetroot juice.

Kvist made 68 appearances in Stuttgart from 2011-14. His time there was not easy, mainly due to changes in manager.

He is very much a team player, with a high workrate. When he played for Copenhagen he participated more in the attacking play. Now he is a largely defensive midfield player. I tweeted about William recently because the Danish press has been negative about his latest performances for our national team. They say that he just plays the ball backwards and to the side, which is true to some degree. But he is playing the’ balancing player’ role, in front of the defence, very much the link between the defense and midfield.

You could say that Kvist is professional about his job and also a bit dull – maybe he is typically Danish! (Bendtner is the exception).