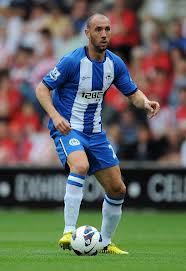 Ivan Ramis was surprisingly given a penalty kick to take.

Playing a strong Blackburn side at Ewood Park was always going to be a tough match. It needed Latics not only to play with intensity, but to do so for 90 minutes. In the event they did so for 51 minutes, gaining the lead. But within a space of five minutes Blackburn got two opportunist goals that knocked the stuffing out of Wigan. A further well taken goal in the 81st minute for the home team did not come as a surprise.

Guessing Rosler’s starting lineup is never easy to do. He was to make two changes from the team that beat Birmingham. The inclusion of William Kvist, who had made two appearances for Denmark in the past 10 days, was quite logical. Adam Forshaw has not played for weeks, but took a place on the bench. Kvist moved into the midfield space vacated by James McArthur. Kvist and Don Cowie took the holding midfield roles, with Emyr Huws pushed further forward. The surprise was the inclusion of Andy Delort, with Oriel Riera left out on the bench.

In the first half, Latics’ high pressing was unsettling the home team and Wigan were looking comfortable. In the 39th minute Callum McManaman won a penalty at the expense of Alex Baptiste. But without regular penalty takers Gomez, Maloney or Watson in the team, who was going to take it? Surely it would be Delort, who had scored penalties for Tours? It turned out to be Ivan Ramis, who kicked it over the bar.

Despite the penalty miss Latics continued to cause problems for the Blackburn defence. James Perch skillfully set up Delort, who blasted wide. McManaman had a good effort saved. Then in the final minute of the first half McManaman put in a beautifully weighted cross but Emmerson Boyce somehow headed over the bar.

Latics started the second half positively. In the 51st minute Huws showed his silky skills, making a great run into the box before the ball fell for Perch to hit the net with a daisy cutter from outside the area. It was his first league goal for Latics.

But a couple of minutes later Ben Marshall latched on to a loose ball outside the box and hit a shot that bounced ahead of Carson’s dive. Two minutes later Jordan Rhodes headed a long free kick into the net via the ground, as he evaded Wigan’s three central defenders.

The two goals in such a short space of time clearly stunned Latics who were to lose their thread. The substitution of Kvist for Shaun Maloney after 63 minutes appeared an attacking move, but the midfield was to lose the dominance it had enjoyed earlier in the game. The high pressing that had been effective in the first half had disappeared and Latics could not raise their intensity. A telling sign was the return to the long hooves by goalkeeper Scott Carson, which achieved little.

Huws went off injured after 80 minutes to be substituted by Adam Forshaw, with Martyn Waghorn coming on for McManaman. Marshall scored his second goal a minute later, with another beautifully taken effort. In the last minute Andrew Taylor found himself inside the six yard box, but he skewed the ball wide.

The result was decided on finishing. Ramis, Delort and Boyce all had clear cut chances to score in the first half, Taylor in the second. Perch scored an opportunist goal for Latics, but Blackburn opportunely scored three.

The intensity was there for 51 minutes and Latics looked good value for their lead. Delort somehow got through 90 minutes despite his lack of match practice. Kvist came in and looked comfortable on his debut. The Dane is clearly not a replacement for McArthur, his role being primarily defensive. However, he and Don Cowie managed to get a foothold in the centre of midfield during the first part of the match.

McManaman looked dangerous, winning a penalty in the process. A pity he did not receive more of the ball.

It was a game of what might have been. Had Latics taken their chances in the first half the result could have been sealed. They were good enough to beat Blackburn, but once they fell behind their confidence dipped.

Not for the first time this season Latics looked lethargic in the second half. Fitness remains an issue within the squad as a whole, especially with the new signings coming in. Moreover there had been a development squad fixture in midweek that would have given Delort, Forshaw and Kvist some playing time, but they were not involved.

Delort is to be commended for completing the 90 minutes, but could hardly be expected to perform at his best after not playing for so many weeks. Putting him in there straight away and leaving Riera on the bench was puzzling.

Kvist had played international football recently, but went off after 63 minutes. Fraser Fyvie had more time on the pitch in pre-season than anybody else and has done well with the development squad, but continues to be left out in the cold. Once again there was no sign of Roger Espinoza.

Forshaw was given his debut in the closing minutes, but it is going to take some time before he gets match fit.

Playing the first half with intensity and not being able to maintain it in the second has been a common occurrence this season. Having played a consistent lineup over the past few games, it looked like some cohesion was developing. However, putting two new signings into the starting lineup was not going to help.

Missing the penalty probably did not help Ivan Ramis’ game, but Rosler’s explanation that the Spaniard impresses with the spot-kick in training hardly holds water. Both Delort and Riera took penalties for their clubs last season and are the obvious candidates.

With Blackburn having two big central strikers who are strong in the air they was always going to be a threat from crosses. However, Wigan’s two best headers of the ball from defence – Leon Barnett and Thomas Rogne – did not make the starting lineup. Moreover the back three of Boyce, Ramis and Kiernan seemed to lack cohesion. Boyce is well below his form of last season and Ramis did not look his usual composed self at times. Kiernan is a fine young prospect, but is still learning the game at this level. Barnett was an outstanding player for Latics last season until he suffered a hamstring injury at Ipswich. Since then he has not commanded a regular place. Rogne seems to have disappeared off the radar.

Scott Carson: 7 – made some good saves. A class goalkeeper, but too prone to making long hopeful punts upfield.

Ivan Ramis: 6 – made a number of good interceptions and quality passes, but not at his best.

Andrew Taylor: 5.5 – did not attack as much as usual due to the threat on the Blackburn right side. Scored a cracker against Birmingham but missed a much easier one in this match.

William Kvist: 6 – a decent debut from the Danish tackler. Substituted after 63 minutes.

Don Cowie: 6 – worked hard throughout the 90 minutes. Much of Cowie’s work is unheralded. He covers a lot of ground and is a real team player. Better in a defensive midfield role than going forward.

Emyr Huws: 6.5 – the most creative outlet, but like most young players he lacks consistency. Needs time. Went off injured after 80 minutes.

Callum McManaman: 8 – easily Latics’ best player. He would be even more dangerous if he could get more of the ball.

Andy Delort: 5.5 – gave his all, but it was not his day. Lacks match fitness.

Shaun Maloney: – came on for Kvist after 63 minutes and played in the centre of midfield. What will his role be in Rosler’s system?

Martyn Waghorn: – unable to create an impression in the last 10 minutes other than receiving a yellow card.

Adam Forshaw: – made his debut in the last 10 minutes in right midfield. How long will it take him to get match fit?