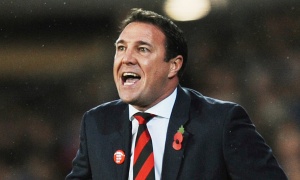 Can Mackay turn it around?

Over the years we have seen some abject performances from Latics with woeful scorelines. Too often when they were in the Premier League they would play a top of the table team and hold their own until the opponents scored their first goal. The confidence would sag and the legs would start to go. The exertion required to hold back the tide had taken too much out of the players, both physically and mentally. It almost looked like the players didn’t seem to care. It was akin to capitulation.

But those players did care. It was a learning experience for so many of them, but they would bounce back and get the most amazing results against those same elite clubs. One always felt with Roberto Martinez that he was trying to do something special, despite the very limited resources he had to work with. It was the mental side of things that he was building up. The players had to be mentally tough to compete against teams with so much more individual quality than they had.

After five decades of watching Latics I have rarely felt as depressed as I was after yesterday’s Norwich game. The stats show that Wigan committed just 5 fouls, to the Canaries’ 12. Neither side received a yellow card. Did those players really care? Where was the passion?

It was sad to see Uwe Rosler’s demise. It was inevitable, given the awful results that his team was getting this season. But Rosler at least had a vision of the kind of football he wanted, even if the players were unable or unwilling to produce it.

The football we saw yesterday was reminiscent of the worst days of Rosler’s predecessor, Owen Coyle. The goalkeeper and the defenders hoofing the ball upfield to a lone centre forward. To his credit Fortune did actually defy the odds and win some of those balls yesterday. But the possession he gained was too often squandered by teammates.

Despite his reputation as a motivational manager, Mackay was unable to motivate his players yesterday. His team selection and tactics surely did not help.

The local newspaper had got us excited about Shaun Maloney coming back after illness. When the team was announced it looked like he would play in the attacking midfield position, in front of Chris McCann and Ben Watson. But Maloney was to be confined to the left wing and James McClean occupied that role. McClean was like a fish out of water. He has a repertoire of skills,  but not those needed for that position. Maloney never got into the game and was substituted after 47 minutes.

Mackay left Emmerson Boyce on the bench and neither Gary Caldwell nor Thomas Rogne even appeared there. Instead Mackay brought in Maynor Figueroa at centre back. Figs rarely played for Latics as a centre half in a conventional back four in the Martinez days. When he did it was not particularly successful. He could be excellent playing on the left of a back line of three central defenders, but that is quite distinct from the position he played yesterday.

Mackay took most of us by surprise when he named both of the previously long-term absentees, McCann and Watson in the team to play at Sheffield. It was even more of a shock to see them paired together again yesterday. McCann had actually performed well in his first two matches, but he and Watson were unable to turn it on yesterday. The two are crucial to Latics turning the season around. Mackay is taking a gamble in playing the two so much after their long recuperations from injury. He runs the risk of losing them with their bodies taking a toll of not playing for 8-9 months.

As expected, Don Cowie made his first appearance under Mackay, who had been his manager at both Watford and Cardiff. Cowie went to right midfield where he performed as he has before in that position. Pedestrian to be sure, but Cowie will at least make the effort. The result was Callum McManaman being pushed inside and not seeming to know where he was playing.

The hard-working Fortune was taken off after 82 minutes to be replaced by Roger Espinoza. Given the insipid, characterless stuff we had seen up to that point it was a pity Espinoza had not been brought on earlier. The player has many qualities, not the least of which is to fight for the ball and run forward with enthusiasm. But, even then, he was a midfielder replacing a central striker with Latics a goal behind.

Mackay was to make his biggest gaffe of the afternoon by bringing on Andy Delort after 88 minutes for Chris McCann. Fortune can rarely be faulted for effort and he often does a remarkable job of bringing down and controlling Scott Carson’s long kicks. But he is rarely a threat to the opponents’ goal. Delort has been scoring goals for the development squad. Admittedly there is a gulf between the Final Third Development League and the Championship, but the Frenchman also has a fine goalscoring record in Ligue 2, not light years away. Bringing Delort on so late is hardly going to help his confidence.

Mackay has a difficult task ahead of him. However, for the last two games his players have not competed as they need to. Moreover he has made baffling team selections.

He needs to get his act together soon, or Latics will be in deep, deep trouble.