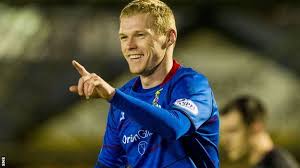 Inverness Caledonian Thistle souces today announced  that Billy McKay is due to have a medical tomorrow in the finalisation of a move to Wigan Athletic. Can Mckay become that goalscoring striker that Latics have sought for so long?

The 27 year old Billy Mckay was born in Corby and began his football career in the Leicester City academy. Despite a good goalscoring record at youth and reserve team levels he did not make a first team appearance and joined Northampton Town at the age of 20. He was to make 74 appearances for the Cobblers, scoring 13 goals over two seasons.

In summer of 2011 Mckay went to Inverness to join Caley Thistle and play in the Scottish Premier League. In his first season he only scored 3 goals in 22 league games, but after that he got better and better. He played in all the 38 league games for the next two seasons, scoring 22 goals in 2012-13 and 18 in 2013-14. He has continued in goalscoring form this season, notching 10 in the 23 league games so far.

Mckay has made 9 appearances for Northern Ireland since making his debut in February 2013.

In order to find out more about Mckay’s time at Inverness we reached out on twitter to Lawrie (alias @Nareystoepoker). Lawrie says he actually went to watch Latics three times in the Premier league days and enjoyed each visit.

Here is over to Lawrie:

Will Billy Mckay (it’s a small ‘k’, by the way) be a success at Wigan Athletic?  That depends on how much of a step up going from the Scottish Premiership to the English Championship is.  But the Latics have signed one of the best strikers in Scottish football; Mckay has scored 59 goals in the last two and a half seasons, more than anyone else in our top flight during that period.

I wouldn’t have said that in the summer of 2012, however.  His first season in the Highlands after joining from Northampton Town was pretty unimpressive, though not helped by an injury that wrecked his pre-season.  Once he had broken into the team, he managed just three goals in the entire campaign, and at one point went sixteen games without scoring.  The decision by manager Terry Butcher to give him a two year deal that summer was a surprise at the time, but he clearly knew something we didn’t, as 2012-13 saw him hit the goal trail spectacularly.

The crucial difference was a dramatic increase in the quality of service he was getting.  After all, he’s only 5ft 7in, and we were playing him as a lone striker; pumping high balls up to him is no use.  Whilst his link-up play in deeper areas is decent enough, there’s no question that Mckay is at his best when he is in the final third and facing goal.  His movement off the ball is terrific, with a speed of thought matched by a rapid acceleration over 5-10 metres.  This allows him to shake off his marker, and is why, despite his size, he still manages to score with his head every so often, generally having found a gap between defenders.

Like all but the most elite of strikers, Mckay is confidence-dependent; he is prone to dips in form which inevitably lead to droughts.  His attitude remains excellent during these periods, and his work-rate will be as high as ever, but his finishing, especially in one-on-ones, will become erratic.  He needs his manager to stick by him in these periods; he’s played in every league match for three years (which also tells you something about his durability).
A lot of players have left Scottish football for the English Championship in recent years; some have succeeded, but many have failed.  Will Mckay make the cut?  My worry is that the step up in quality will be too big.  Our league is full of big, lumbering centre backs that the Northern Irishman could leave for dead, but now he’ll be up against guys who are just as strong, but can match his pace; they might also be more tuned to his off-the-ball movement.  But he’s certainly earned the right to give it a shot, and he leaves Inverness with our best wishes.