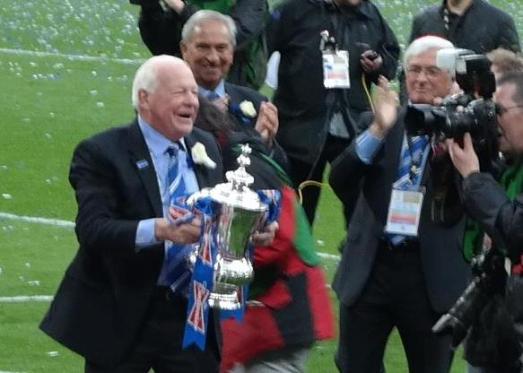 Sometimes we lose sight of things that happened not so long ago.

“He is the man to lead us back into the Premier League.”

Looking at Dave Whelan’s comment when Malky Mackay was appointed brings perspective. The chairman was looking at salvaging a season that had gone awry under the leadership of Uwe Rosler. He had acted in a timely manner to keep the promotion dream alive. How could he have expected that fourteen games later Latics would stand second from bottom nine points from safety?

Whelan has spent almost £100 million on Wigan Athletic over the past two decades. Only the naïve could argue that Latics could have achieved what they did without his funding.

But Whelan did much more than that. His vision and leadership turned a struggling lower division club into an entity to be respected at national level. It was the driving force that is not so apparent now as it was before.

Wigan Athletic’s success has brought it a larger fan base than could have been imagined twenty years ago. Wigan was a rugby town – at least in terms of attendances – when he first took over, but he turned it around. The football club’s attendances over the past decade have consistently bettered those of their rugby counterparts.

Moreover support has not just grown inside the town, but the club has become known on a global basis. Eight years in the Premier League and reaching the League Cup Final helped, but winning the FA Cup was the icing on the cake.

However, through those successes, expectations heightened. Latics wisely courted the young supporters who would provide the backbone when their more senior equivalents would no longer be around. But the younger support was brought on Premier League football. They were not there when Latics visited the likes of Prescot Cables and Earlestown. They don’t expect the club to be struggling to stay in the Championship division.

Whelan pumped so much money into the club for so long. In recent years he has insisted on the club balancing its books and his Chief Executive Jonathan Jackson has played a major role in making that happen. Old timers will know of his father Stan, ex club President, who did so much for Latics in his time. It could be said that Stan Jackson’s greatest achievement was persuading Whelan to buy the club those years ago.

The traditionalists will say that a football club belongs to the fans. But the reality is that, at the highest level of English football, the fans take the back seat. There are no clubs who can challenge in elite circles without massive financial backing. Some clubs have become supporters’ trusts, but they too have face financial reality. The concept of fans owning a club is appealing in many ways, but the reality is that those clubs continue to struggle.

There is a large degree of uncertainly this moment in time at Wigan Athletic. People are waiting for leadership from Whelan. Where is the club heading now? Will he be selling up or handing the reins to his grandson?

Above all, what is his vision for the club’s future?

At 78 years of age, and after achieving more than could have possibly been imagined, does he have the energy for one final fling? The “racism saga” with the FA must surely have taken a lot of out him.

In the coming week he might well make the decision to relieve Malky Mackay of his duties. But what would follow if he did?

Maybe Whelan has had enough and is ready to pass on to someone else. That would be perfectly understandable.

However, if that is to be the case, can he please set some direction beforehand?

The direction would identify what kind of club Wigan Athletic should be in the future. Without big financial backing it would surely need to be a club that can be self-sufficient, holding its own but surviving economically on selling off its top talent.

Where is the club heading? Not only for League 1 but the non-fulfillment of the Academy scheme at Charnock Richard?

Dave Whelan has enabled amazing things to happen at Wigan Athletic, but it could well be that the time has come to pass the reins to someone else.

However, let’s hope that it will not be the immediate case.

Whelan’s final fling could well involve the dismissal of Mackay and the appointment of someone who could motivate and organize the players into saving this sad season for the club.

Anything more than that would be a bonus.