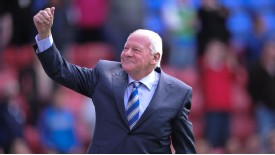 I read a quip the other day that amused me.

It is relatively easy to take out £1m by being the owner of a football club. All you have to do is first put in £2m.

Dave Whelan reportedly put £100 m into underpinning Wigan Athletic’s success over these past two decades. One wonders what he will get back.

Football clubs are probably the worst run businesses to invest in. So few make a profit because of mismanagement within and the pressure on clubs to spend to keep up with others. So many are kept afloat by their owners and benefactors.

According to Sir John Madejski, Reading chairman, the ideal football club owner is “someone with deep pockets, mercurial, and not faint-hearted.”

That could well describe Whelan over these years. His generosity to his home town club has been exceptional. Through converting debt to equity he has effectively given the club financial stability.

The case of Bolton Wanderers differs. They currently owe Eddie Davies over £165 m. Davies, now 67 years old, made his money out of thermostats for kettles and moved out of Bolton in his twenties. When he bought the club in 2004 fans expressed concern that they were now owned by an Isle of Man tax exile via a trust listed in Bermuda.

Davies has not actually given the money to the club, but has provided loans on which they have had to pay interest payments every year. The last time Wanderers made a profit was in 2006 and even that was close to breakeven. Put simply they have been living beyond their means for so long and if Davies were to pull the plug the very existence of the club would be at severe risk. Today’s Daily Telegraph reveals that Davies would be willing to sell the club, should he right buyer come along. But is any potential buyer going to be willing to takeover so much debt?

Dave Whelan’s silence over the past couple of months has caused unease among so many Wigan Athletic supporters. We had become so reliant on him to provide the financial backing needed for the club to make forward strides. However, over the past four years he has insisted on the club at least breaking even financially. The profits made over the past three seasons have made Latics a beacon among the dark and shady world of mismanagement typical at so many football clubs. Breaking even this season will be more of a challenge, but the selling off of assets and the reduction in liabilities that happened during the January transfer window will surely put things back on track.

The apathy by which fans have witnessed the selling off of many of the most accomplished players can be viewed as a sign that people are beginning to lower their expectations for Wigan Athletic Football Club. The notice boards and social media are awash with comments amounting to something like the club being bigger than just one man and that it can be run with dignity in the lower divisions. As always there are the cynics who suggest Whelan is pocketing profits, getting some money back after so many years of putting it in.

One thing we can expect over these coming weeks is for Whelan to step down as chairman. It remains to be seen if his grandson, David Sharpe, will take over the role.

The big question is whether the Whelan family will continue to pull the strings at the club in the long-term, or whether the house is being put in order for a sell off.

Should the Whelan dynasty continue we can expect the club to continue to be run on a breakeven basis.  After all could any of us reasonably expect the Whelans to pour in more funds in the hope of restoring past glories?

However, for a business to be run on even a breakeven basis there needs to be some kind of strategic plan. This would involve the fashioning of a new identity for the club that fits its current situation.

Gone is the romantic idea of “Little Wigan” holding its own in the world’s most wealthy football division. In its place needs to come a more grassroots identity, a club noted for its coaching and development of players who can be sold on in a systematic basis rather than the awful fire sale we have recently witnessed. The club as a finder of raw talent that it hones into a lustrous product that it cashes in on to keep itself moving forward.

The alternative is to stand still, which tends to inevitably lead to dropping back.

A key strategic issue that needs to be addressed is the development of an academy at Charnock Richard. Apart from the capital costs, which can be covered by incoming transfer dealings over the past year, will it be a moot point because of the operating costs it entails?

However, the probability is that Latics will be in League 1 next year. The FFP rules differ significantly there from those of the Championship division. Clubs are only allowed to spend up to 60% of their revenue on player salaries. Moreover standing costs for the club will need to be thinned down proportionate to the drop in revenue. Should that be done effectively it would surely leave some wiggle room for an academy which would cost around £2m to operate.

The starting lineup that faced Cardiff City on Tuesday night included only three players with contracts that go beyond this summer. The likelihood is that few of those short term signings or loanees have a future at the club. Moreover should relegation become reality Latics are going to have to shed not only those at the ends of their contracts, but a significant number of the players who were signed on contracts that could be considered lucrative by Championship standards.

When Wolves were in a similar situation in the summer of 2013 they released seven players, sold two and sent seven more out on loan. By the end of the season they had done seventeen loan deals of their players out to other clubs, They brought in three new players over the summer, with another five coming in January, including Leon Clarke and Nouha Dicko. They had only two incoming loans, both short-term in the first half of the season.

The key for Wolves turned out to be the appointment of manager Kenny Jackett, who remains in charge as they sit in eighth place in the Championship table. It remains to be seen whether Malky Mackay would be entrusted to try to follow Jackett’s lead should Latics get relegated.

Many fans are nervous about the possibility of the club being sold. Even if Latics are in League 1 next year the club will be a possible target for purchase. Through its successes, particularly in the past decade, the Wigan Athletic “brand” has gained considerable prestige. Moreover the club is close to being debt free. The fan base might pale in comparison with big city clubs, but has grown so much over these years. The club has a fine stadium and has bought a potentially excellent site for a youth academy.

Fears of the club being taken over by a foreign owner may be justified to some degree. However, with a new owner willing to invest in the club like Whelan did before, Latics would have a competitive edge compared with an austerity-laden approach that might operate under a Whelan dynasty regime.

Put simply, were Latics to be relegated they would have to compete with at least half a dozen ex-Premier League clubs in League 1. What would give them any kind of competitive advantage over those clubs and others in the division?

Without Whelan’s financial backing Latics would not have achieved what they did over the past twenty years. Without an owner willing to invest significant funds into the club it is going to considerably lower the odds of them getting remotely back to where they were three years ago.

No matter who owns the club it will need to refine its vision and direction.

Without that it will meander into mediocrity.