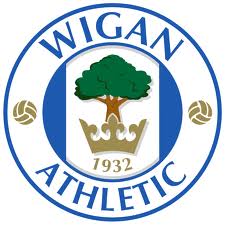 Defeat to Wigan Athletic is something that Bolton Wanderers supporters find hard to bear. After all their local rivals are nothing but young upstarts compared with the glorious history of their Trotters.

Wanderers were founder members of the first Football League in 1888, one of the 6 Lancashire clubs that formed that initial division of 12. Since then they have spent more time in the top tier (Premier League/First Division) than out of it, 73 seasons to be precise. Their highest placing in the top tier was 3rd in 1920-21 and 1924-25 seasons. By the time Latics entered the Football League in 1978, Bolton had won the FA Cup four times, being runners-up on three occasions.

Wigan Athletic and Bolton Wanderers had their first-ever encounter in the Football League on Boxing Day in 1983. That was in the old Third Division and Wanderers won 1-0, but Latics went on to win by the same score in the return match at Burnden Park. Things have remained fairly even ever since. Bolton have won 17 and Wigan 16, with 11 draws in league and cup matches between the two clubs.

No matter what situation of either club the result of the derby is always of paramount importance. But a win it is so much more important to Latics than Bolton this time around. The 2-0 home defeat to Watford in midweek was depressing in that it was a repeat of what has happened on too many occasions this season. Wigan seeming to match their opponents, but once a goal has gone against them they have not been able to get back into the game.

However, the 2-0 defeat of Rotherham at Nottingham Forest and a 3-0 home reverse for Fulham against Leeds United means that Latics remain at 6 points behind the two. Moreover the London team’s collapse continued with Leeds scoring with the only genuine chances they had.  Fulham strikers Ross McCormack and Matt Smith, who had a combined total of 42 goals for Leeds last season, just could not find the net. Like Wigan, Fulham were among the bookmakers’ favourites for promotion this season. They are caught in a downward spiral, having won only one of their last thirteen games.

Latics’ miserable home record – their last win was against Birmingham City on August 30 – will surely come to an end soon. The pundits have tried to explain how a team can win four consecutive games on the road, but lose their last six at the DW Stadium. Their approach to matches appears similar, be they home or away, but they have so often been caught by surprise at the DW.

The away victories have been characterized by them getting goals relatively early in the proceedings and hanging on to their lead with grim determination. Most of those goals have come from set pieces, which clearly have not worked at home where they have not scored a goal for four matches.

However, football is rarely as scientific as we sometimes think. The difference between winning and losing games in the Championship can so often depend on a slice of fortune – a deflection or a misplaced pass finding a teammate for whom it was not intended. Latics have enough height to be a danger at set pieces, but too often the delivery at home games has been found wanting.

However, the law of averages tells us that you are more likely to score goals if you have players in the penalty box. Even better if they are in the right place at the right time. Some players have a knack of being in such positions. Some do not. Given Mackay’s choice of strikers over recent months it is sadly no surprise that Latics have not been scoring goals.

This is the least accomplished group of players the club has had for at least a decade. Most are loanees or on short term contracts. They lack the mutual understanding gained through playing as a collective unit over a long period of time. As a result the whole is less than the sum of its parts.

However, Mackay has largely succeeded in getting levels of commitment that were not apparent earlier in the season. He has stabilized the defence. The central defensive pairing of Harry Maguire and Jason Pearce is rugged and determined, well suited to the division. Mackay will look towards playing with a solid defence and scoring from set pieces.

However, Bolton do not have a particularly good team. They are out of the relegation zone due to the “new manager effect” after Neil Lennon was appointed, something that Latics crucially missed with Mackay. That effect has since faded and their squad is not overburdened with talent. They have lost their last six away games and have difficulty scoring goals. Their leading scorer is Zach Clough with just 6 goals, although Adam Le Fondre has scored 5 in his 10 matches so far.

Wigan Athletic fans have learned to keep their expectations low for results in home games over the past six months. Maybe the time has come for them to see the victory they have been waiting for so long. It would be particularly sweet against a local rival which considers itself a step above.