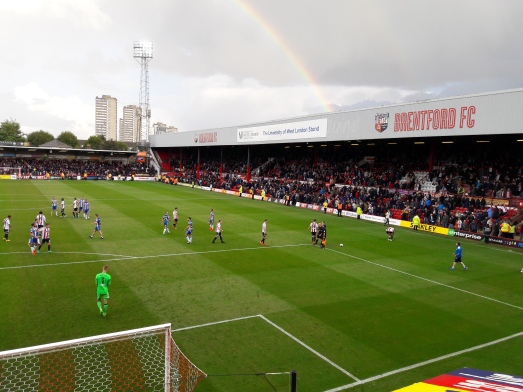 Brentford is not a particularly attractive place. Neither is Griffin Park football ground, at first glance. The Bees fans still have three more years to wait before their new stadium is built. But for all its faults the old stadium is well maintained, with a superb playing surface and we had a great view from the away supporters end. Moreover it was a rare pleasure to mingle with home fans before the match started, with no hint of the kind of insularity and hostility that can prevail in the vicinity of some English football stadia.

The home supporters were optimistic before the match, their team having scored nine goals in their last two home games. But they were to be disappointed as a resolute Latics side spoiled their afternoon by coming away with a point. One home fan went so far as to say that the only entertainment of his afternoon was provided by the stunning double rainbow which hovered above the stadium in the second half.

On the other hand the Wigan fans were appreciative of what they had seen. Their team had shown the kind of defensive strength that had been missing since the start of the season. That, together with the rainbow, will stick in many of our memories over the weeks to come.

Gary Caldwell’s tactics certainly worked. He packed his midfield, denying the home team of space. Will Grigg cut a lonely figure for most of the first half, the midfielders holding back rather pushing forward to support him. Wigan’s attack was muted, but so was that of the home team as the Latics defence held firm, shielded by a combative midfield. The home crowd had seemed muted too, their hopes of another goal-fest diminishing by the minute.

When the second half started it looked like a goalless draw was the most likely outcome. Could the Wigan defence hold out or was all the good work going to be ruined by sloppiness as the final whistle would approach? Caldwell was likely to bring Yanic Wildschut off the bench at some stage, but it seemed more likely to happen later rather than sooner.

Strangely enough Caldwell made a double substitution in the 57th minute, bringing on Wildschut and Nick Powell for Nathan Byrne and an ineffective Jordi Gomez. Caldwell was opening up the game with the substitutions. On one hand Latics were to increase their attacking intent. On the other Brentford were to enjoy more space. Powell and Wildschut did enliven the Wigan attack, while an under pressure defence still continued to hold firm. The 0-0 score at the end was a fair result for both sides.

The central defensive pairing of Jake Buxton and Dan Burn was strong in this game. They are clearly developing a mutual understanding. After a shaky start at the club Burn has shown his mettle in recent weeks. He was arguably the Man of the Match yesterday, towering above the Brentford forwards, his positioning sound and tackles firm. However, it could be argued that Buxton was just as good. He does not catch the eye as much as Burn can. Buxton just seems to get on with his job, nothing flashy, but solid and reliable. It was noticeable from an early stage in the game that the two had been given licence to clear their lines when under pressure. The inter-passing between defenders that had been problematic in previous matches had taken the back seat to a more pragmatic approach of safety first.

There has been much talk about the merits of 4-3-3 over 3-5-2. Although seemingly playing with a back four yesterday the presence of Shaun MacDonald so close to the central defenders reminded one of the role Ben Watson could play in the Martinez era. After getting so little playing time over the last two years the Welshman is getting back his match fitness and sharpness. He played a key role yesterday.

The point yesterday puts Latics out of the relegation zone. The cohesion is gradually developing and it is starting to look much more like a team rather than a collection of individuals. There will be ups and downs ahead, but the squad has sufficient quality to at least hold its own in the Championship division.

After the game I met up again with Billy Grant of Brentford fan site Beesotted. Billy has provided us with fascinating articles in the past and his podcasts are always worth a listen. His post-match podcast is to be found below. My contribution from a Wigan perspective starts at 8:00 minutes: