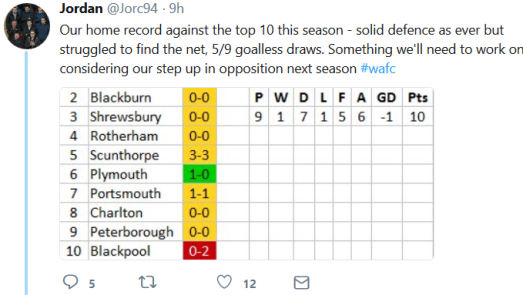 “Rotherham were a tough test for us ahead of the last five games, so it was important for us not to get beat.”

The words of Dan Burn after a disappointing performance.

Prior to this goalless draw at the DW Stadium, Rotherham United had lost their previous three away games, conceding eight goals in the process. But they deserved not to lose yesterday. They packed the midfield, pressing Latics into making mistakes and their big lone striker proved a physical handful for the Wigan defence.

Latics looked pedestrian, plodding along, not the dynamic outfit who had scored nine goals in the previous two games. Passes were misplaced, and the build-up was painfully slow. Although it was their third game in the space of eight days, once again Paul Cook resisted the opportunity to freshen up his pack and stuck with the same starting eleven.

Thanks to a Bristol Rovers goal in the fourth minute of stoppage time, Latics remain on top of League 1, ahead of Blackburn on goal difference. They are in pole position, with a game in hand to Blackburn and five-point buffer ahead of Shrewsbury. Latics have five games left: two at home and three away.

Dan Burn emphasised the importance of not having lost to Rotherham, who remain in fourth place. His comment begs the question as to whether Latics were  focused on not losing more than actually winning.

It was the kind of performance that we have seen before in home games against teams from the top ten. In so many of them Latics have seemed unwilling to fully commit men forward, in fear of counterattack. At the DW they have beaten only one team currently in the top ten and that was a tight 1-0 win over Plymouth, who were bottom of the table at the time. On the other side of the coin, they have only lost one, that being against Blackpool prior to the Manchester City epic. They shared the points in the others, five of those being goalless draws.

The counter-argument is that Latics are the prize scalp in the division and that visiting teams come looking for a draw, doing all they can to dull Wigan’s attacking threat. Most of Latics’ best performances this season have been away from home, where the opposition has had to show more attacking intent. The stats show that Wigan have picked up 44 points from 20 games on the road, compared with 43 points from 21 games at home. Against the top ten teams away from home they have a record of W4 D2 L3, whereas at home it is W1 D7 L1.

Cook’s record last season at Portsmouth against the other teams who finished in the top ten makes interesting reading. Like Wigan their results against their closer rivals were not impressive. Pompey’s home record read W4 D2 L3, whereas on the road it was W4 D1 L4. They  failed to score in two of those home games against top ten opposition.

Yesterday Cook resisted the chance to bring on James Vaughan after half time for the injured Nick Powell, instead introducing Gary Roberts. Vaughan had teamed up with great effect with Will Grigg after coming on at Rochdale but Cook chose the more conservative option by making a like-for-like replacement. Cook was clearly concerned about losing further control in the midfield.

After the game the manager commented that:

“We can’t win every game and steam roll every team, football is not like that. It’s a difficult game and every point towards the end of the season is golden.”

Cook was obviously keen to pick up one point if he could not pick up the three.

Wigan’s performance yesterday and in previous home games against top ten opponents begs the question whether too much respect has been shown to such opposition. But for the moment Latics are in a great position to consolidate their promotion to the Championship division. Cook deserves commendation for helping his team get to such a point with only three weeks of the season remaining.

Thanks to Jordan for his revealing analysis on Twitter.