Another valuable three points for Latics over a team in the promotion zone. It was by no means a classic but Latics showed the kind of resolve that will serve them well as the season progresses.

“I thought we were defensively sound and we limited Bristol City to very few chances, and by the way, we had very few chances as well. It wasn’t the game we all thought it was going to be. It’s important to stay solid and in the last week we’ve given some teams too much space to run through us. Tonight the full backs were narrower and worked with the central midfielders.”

Paul Cook once more gave his honest appraisal of how a game went. A draw had appeared the most likely result, but a pinpoint cross from Josh Windass was met in style by Nick Powell to get the deciding goal. It was the highlight of a drab game, where the two teams between them mustered only four shots of target.

Let’s take a look at some points arising from the game:

The last time Latics were in the Championship they won only five games at home in the whole season. They have already won four out of the five played this season.

Last season saw Wigan amass more points away from home (51) than at the DW Stadium (47). But they lost just two at home to Bradford City in November and Blackpool in February. Latics were a club to be feared in League 1 and visiting teams would so often come to the DW to frustrate rather than try to win the game. Latics had more space away from home and their football was often more entertaining.

Last night we saw a Bristol City attack Latics from the start. City were looking confident in the first half and Wigan had to work hard to keep them from scoring. But a goal can change the psychology of a game and City did not pose the same threat after Nick Powell’s excellent goal after 51 minutes. Nevertheless, Latics still had to work hard to hang on to their lead, not least in the 94th minute when Diedhiou went to close to equalising with a reaction header.

The next home game is on October 2nd when Latics entertain Swansea City.

It was unfortunate for both teams that this match had been chosen by Sky for Friday night viewing. Having played three games in six days neither team was at its best. The outcome was a game low on entertainment.

Lee Evans summed things up after the game:

“We knew with three games in six days we’d have a lot of tired legs out there and that reflected on the game because it was scrappy throughout. There was plenty of hunger in the dressing room. We only have to look back to the Brentford game and everyone was disappointed, not just the fact that we lost the game, but the way in which we played. It was important to bounce back in the two home games. We didn’t play at our most fluent tonight, but we got the three points and got ourselves up to third in the Championship.”

Sam Morsy was named Man of the Match by Sky following a typical all-action display. The Latics captain is a midfield player who leads by example. But Chey Dunkley was surely also a candidate for MoM, with the kind of solid and determined performance that we have come to expect from him.

It has not been an easy season for Dunkley. Not only was he embarking on just his third season in EFL football, but he was to be surrounded by the youngest defence Latics have had in years, with the combined age of his three teammates in the regular back totalling just 59 years. Dunkley himself is only 26, but like Morsy he has led by example in his leadership of that young back line.

Dunkley is not the most elegant of central defenders, but his no-nonsense approach makes him a force to be reckoned with by opposition forwards. Cook expects his full backs to move forward with freedom, with the holding midfield players providing defensive cover. But sometimes they too are caught forward and the central defenders can be left exposed. Cedric Kipre has made a fine start to his Latics career, making the transition from just one full season of first team football, that being in the SPL. His partnership with Dunkley will be key to Latics’ success this season.

Joe Garner is nothing if not a competitor. Brought into the line-up due to the injuries to Will Grigg and James Vaughan, it was his first start of the season.

The 30-year-old is 5 ft 10 in tall but is not averse to physical challenges on central defenders who are much bigger. Moreover, he has a good leap and can challenge them in the air. He is strong in holding up the ball.

Garner is a different type of player to Grigg and Vaughan. He is certainly combative and last night was perhaps fortunate not to have been given a red card for a crude challenge just before half time.

The strike rate for Josh Windass is not so far off, at 0.26 (36 goals in 139 appearances), despite often being played out wide despite his preference for a central striking position.

All four strikers have something different to offer, giving Cook lots of options.

Why does Michael Jacobs rarely get penalties?

In the 22nd minute Michael Jacobs was clearly pushed from behind as he was running inside the penalty box. Jacobs fell in theatrical style but did not impress the referee enough to be awarded a penalty.

It has happened so often for the player over the past three seasons. Jacobs’ pace and directness frequently troubles opposition defences who sometimes resort to negative tactics to stop him. But despite going down so many times following dubious challenges in the box, Jacobs rarely wins the penalty.

Some players are experts at fooling referees in giving penalties. Jacobs is the opposite, much to his team’s disadvantage.

Like so many of the best wingers in the modern game, Jacobs has the ability to cut in from the flanks at full throttle. Running at pace it does not take a lot of contact for the winger to be unbalanced and fall to the ground. That is what has so often happened to Jacobs, but whereas other wingers in similar situations often win penalties, Jacobs rarely does.

Would Jacobs have won the penalty last night if he had not fallen so theatrically? It is a hypothetical question but Cook and his staff might want to look at video replays of previous incidents involving Jacobs running into the box. Whether the player is over-reacting or whether it is his natural fall in such circumstances is hard to say, but last night he was denied a penalty that was merited.

It seems to be an endless saga. Will the takeover actually happen?

The Sky commentary team told us last night that it will be concluded in the next three months.

Why the deal is taking so long is puzzling to so many of us as fans.

Will all be revealed in the end, when and if, the takeover happens? 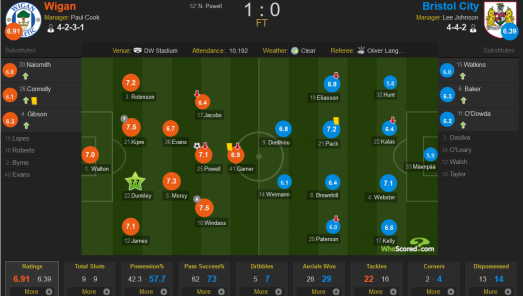