What an uplifting performance and result! Latics fans had been so down in the dumps following a dismal performance at Preston, but this rousing display has once again lifted spirits.

The augurs did not look good for Paul Cook’s side, with Will Grigg and Michael Jacobs joining Gavin Massey on the “major hamstring injury list”. There was a certain amount of doom and gloom prior to the game and Cook’s team selection looked uninspiring. It was no surprise to see Dan Burn come in for Antonee Robinson, but the selection of Nathan Byrne and Gary Roberts on the flanks, at the expense of Callum McManaman did not impress. But the end result was that Cook’s team selection and tactics worked in securing a win over a team whose wage bill dwarfs that of Wigan.

It took a moment of opportunism from Josh Windass after 74 minutes to bring home the three points, outpacing a central defender following Nick Powell’s flick-on header. His finish was resolute. West Bromwich had dominated the early possession and looked the more threatening, but as the game unfolded Latics looked the more dominant attacking threat.

Following the game West Brom manager Darren Moore commented: “Those type of games are there lying and waiting in the Championship. I’ve no complaints. It was a game where both teams were battling, not much goalmouth action. Whatever goalmouth action there was it was off target. From a neutral it looked like it was going to be a nil nil. The chance fell to them, the boy took it really well and you suffer a defeat.”

Moore was largely accurate in his appraisal of the game, although most neutrals present would have most likely said that on the balance on things, Latics deserved their win.

A change in tactical approach

When Wigan lined up it looked like the regular 4-2-3-1 formation that has been the norm in Cook’s tenure. However, the two central defenders were switched with Kipre put on the right side and Dunkley on the left. West Brom’s front two of Dwight Gayle and Jay Rodriguez had already scored 15 goals between them, one goal more than Latics entire team had mustered up to that point. But following a tough time at Preston, Wigan’s centre backs rose to the occasion and kept Gayle and Rodriguez on a short leash. Kipre had what must be one of his best performances for Latics and Dunkley once again showed his mettle.

It looked like Cook had given Windass the opportunity to play in the lone striker role, but as the game progressed we would see he and Powell exchanging positions. It proved to be a masterstroke as the opposition defence found their movement hard to deal with. Moreover, the synergy between the two gave us a glimpse of a fine partnership developing.

We get a glimpse of why Windass was signed

Josh Windass had looked like a duck out of water playing wide. Given the opportunity to play a more central role he looked a fine player, industrious, intelligent in the timing of his runs, a headache for the visiting defence. Windass had 6 shots, with 3 of them on target. Given Latics’ shot-shy record in recent games it was refreshing.

Cook had had so many of us fans rubbing their heads as to why he would pay £2m for a player who prefers to play as a central striker when he already had three others fighting for a place in that position. But much was revealed after yesterday’s game when the manager said:

“Today, we had natural balance with Gary Roberts – who was absolutely magnificent – and Nathan Byrne the same. That allowed Josh to play in a position that we have brought him into the club to do and you saw the energy he has got, whilst he also can finish – his goal was top class.”

Seeing the way Windass linked up with Powell one could get a glimpse of Cook’s belief in the player.

But Cook still has Garner, Grigg and Vaughan fighting for a striker position, which will be a dilemma for the manager.

Another line of thought is that Windass was signed as a back up for Powell, should he leave in January.

Powell’s continued tenure at Wigan will depend on the stance of the new IEG owners, when the takeover happens, assumedly in November. Where would this current team be without Powell’s superb build-up play and his ability to score and assist in making goals?

Roberts has prior experience at Championship level and he looked a class act. Although 34 years old and with just 7 minutes of second tier match play behind him this season he worked hard for 89 minutes, putting in finely weighted passes and crosses.

He has not been the most popular of players with Wigan fans, the cynics regarding him as an old pal of Cook’s from Chesterfield and Portsmouth. Indeed, questions were asked as to why someone at this stage of his career would be offered an extended contract.

Roberts has never been particularly fast. If he had been he would have played in the top tier. But last season’s stats reportedly suggest that when he was involved he covered more ground than most of his teammates, with a sweet left foot to match.

He got a merited ovation as he left the DW pitch yesterday.

Reece James was once again excellent yesterday. Although only 18 he is the complete full back, strong in defence, skilful in attack, but more than anything else he has a great football mind. Barring serious injury or calamity he looks destined to be the regular right back for England.

Media reports tell us that Brighton will make a £10m bid for him.

But would Chelsea seriously consider such an offer for a player of his level? Admittedly the Chelsea academy produces so many fine players whose chances of first team selection are minimal, but James is something special.

Should Brighton get him at that price it would be a bargain.

Millwall lie in 22nd position, with just two wins so far, but at home they have beaten Derby County and Aston Villa and drawn with Leeds United and Middlesbrough.

A trip to the New Den has never been easy for Latics and their away form has been unimpressive of late. Moreover, Latics have an inferior record in games against Millwall.

Barring injuries, Cook is likely to name an unchanged line-up. What Latics can expect is a fight on their hands. Do the players who played most of the game against West Brom have the energy and determination to fend off a side that has had difficult home fixtures so far, but has an intimidating support?

It might not be pretty, but Cook’s men must be ready to slug it out with the home team. The complacency we saw at Preston could lead to calamity. 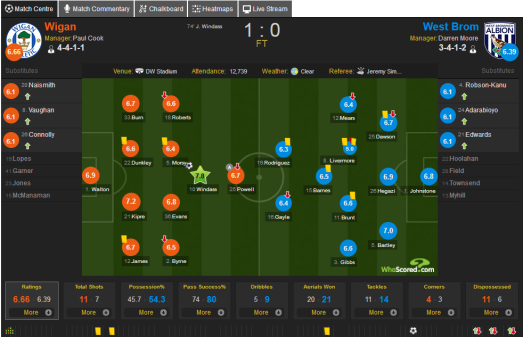