Following the uplifting display against Aston Villa we witnessed another depressing performance at Hillsborough. Two poor teams offered little by the way of entertainment, although the conditions did not make things easy for either side. The game was decided by an excellent strike by Wednesday centre forward Steven Fletcher, aided by a lack of challenge from the Wigan midfield. But the home side were deserved winners, having eight shots on target compared with one from a toothless Latics outfit.

Paul Cook had named an unchanged side. Latics started positively but they were reluctant to push men forward to support the lone striker, Joe Garner. The high tempo, high pressing game that we saw against Villa was not evident. It was the home side who posed the greater goal threat and Jamie Jones was much the busier keeper. Wednesday could well have scored had it not been for superb last-ditch tackles from Chey Dunkley and Cedric Kipre and good goalkeeping by Jones.

But Latics managed to keep it at 0-0 when the teams marched off to the half time interval. The second half revealed that depressing type of play that has been so often the norm in recent months. The “hoof” was very much prevalent, and Wigan struggled to do anything constructive with the ball. After Fletcher’s goal in the 62nd minute one hoped for a riposte from Wigan, but nothing resulted. If another goal was to come in the game, it would most likely be the home team that scored it.

Following the match Paul Cook commented: “At half-time I was thinking there was something there for us but in the second-half Sheffield Wednesday totally dominated the game and fully deserved the victory. We got ourselves into a position to possibly get something from the game but, unfortunately, we fell away in the second-half and Sheffield Wednesday were full value for the win. We never got a foothold in the game or got into positions to hurt them and that is great credit to them.”

But for an excellent display by Jamie Jones the scoreline would have been quite different. Although it is the keeper’s first season in the Championship at the age of 29, he looks far from overawed. In fact, he seems to be relishing it. Again, he was assertive in his box, making some fine saves. Moreover, as soon as he catches a ball, he is quick to step forward, looking for a quick throw to a player in space. Sadly, yesterday there were too few of his teammates moving to make themselves available to receive the ball. Far too often the keeper had to kick long, typically resulting in lost possession.

A product of the Everton youth system Jones joined Leyton Orient as a 19-year-old, spending 6 seasons there, making 161 league appearances. After letting his contract run down at the O’s he joined Preston as a free agent in July 2014. During his two years at Preston he made 14 league appearances, with another 34 on loan at Colchester, Coventry and Rochdale. Jones joined Stevenage in January 2016 and went on to make 53 appearances for them in League 2 before joining Latics as a free agent in August 2017.

Rather than play side by side in central midfield Lee Evans and Sam Morsy were given different roles. Evans was put in front of the back four with Morsy pushed further forward. Then midway through the first half Gary Roberts was moved from the left wing to play an inside left position. Josh Windass was moved to the wing.

The net result was Evans being swamped by the heavily populated home midfield, with Morsy and Roberts able to create few openings going forward. Windass had played one of his better games against Villa in a mobile number 10 role, but the switch saw him consigned to the wing where he rarely plays his best.

The lack of midfield cover was plain to see in Fletcher’s goal.

What on earth was Cook trying to achieve? Wednesday playmaker Barry Bannan had the freedom of the park.

What happens at half time?

Despite not playing particularly well in the first period Latics went in to the interval on level terms. For many teams playing away such a situation could be seen as a springboard to getting a positive result. But in Latics’ case this season it has rarely happened.

Latics were 2-0 up at Swansea after dominating the game in the first half through high tempo, high pressing football. In the second half the intensity just was not there, and the home team came back to level the scores. Like yesterday in the second half Wigan had started employing the hoof.

Are the reasons for the disappointing second half performances due to physical reasons? Or are they psychological? Or the result of tactics discussions during the interval? After a fine performance against Aston Villa, where the intensity did not diminish in the second half, we were hoping for something similar yesterday.

After making an excellent debut last week Anthony Pilkington had to leave the field of play at half time after turning his ankle over. Cedric Kipre continued to play despite an ankle niggle. But it was Will Grigg’s injury that looked the more serious.

Cook is having no luck on the injury front and he remarked after the game that: “That’s what the league is, you get injuries, we were in a bit of fog but getting towards clear light and now it looks like we are heading back into that fog – that’s the way it is, though.”

Grigg to Sunderland off

The constant media barrage of “Grigg to Sunderland” has been wearing thin with Wigan Athletic supporters. But if Grigg’s injury is as serious as it appeared, he surely will not be leaving this month.

Will Grigg remains a favourite of so many Latics fans, though there are those who do not consider him to be a Championship level striker. His season has been riddled with injury, but even when fit he has often been left out of the starting lineup.

In the meantime, Devante Cole has returned from his loan spell at Burton Albion after making 6 starts and 7 substitute appearances, scoring 2 goals. If Grigg is out long-term will Cook look for a replacement in the transfer window or will he give Cole the genuine opportunity he was denied in the second half of last season? 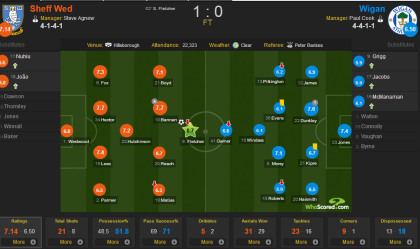