A moment of inspiration from the 17-year-old Joe Gelhardt helped Wigan Athletic share the points. It had been a scrappy game between two mediocre teams.

Paul Cook had named an unchanged side from the one that had started in a goalless draw with Barnsley.

Chey Dunkley put Latics ahead after 7 minutes after Hull keeper, George Long, had spilled Kieffer Moore’s header. But that early lead was thrown away within a couple of minutes by inept defending with Jarrod Bowen slotting home. Polish winger Kamil Grosicki had been causing Latics problems on the right side of their defence and it was he who scored a fine goal from a free kick after 20 minutes. Wigan went into the half-time interval trailing by a 2-1 margin.

Grosicki had another excellent free kick hit the post as Hull were getting on top. Wigan’s attacking was far from convincing and the game seemed to be heading towards a home win. But Joe Gelhardt was brought on after 72 minutes, playing in a more central role this time. After 75 minutes he turned past a defender in the penalty box and scored at the near post with Long rooted to the spot.

The point gained takes Latics to 5 points from 7 matches, third from bottom.

Let’s take a look at some points arising from the game:

A goal for Dunkley – at last

Chey Dunkley is in his third season at Wigan. In his first, in League1, he was part of a formidable centre of defence with Dan Burn. Not only was Dunkley defensively solid, but he also scored 7 goals over the course of the season.

The transition to the Championship was difficult for a player who had not played at that level before. Like so many other players last season he certainly had his ups and downs, one minute making a superb last-ditch tackle, the next losing concentration. His goals also dried up. So many times, he seemed likely to score, getting himself in good positions, but he just could not put the ball home.

Dunkley’s goal yesterday will do his confidence the world of good. Now he has broken his duck in the Championship we can expect more goals from the big man.

Can Gelhardt seize the number 10 role?

Replacing Nick Powell was never going to be easy for Paul Cook. Lee Evans and Josh Windass have both stepped in with mixed results. Yesterday Cook played Jamal Lowe in a more central role in the advanced midfield trio. Lowe did not do badly but was not particularly convincing.

Powell usually played a classical number 10 role, receiving the ball in deep midfield, linking up with the forwards and overlapping full backs. But sometimes he would be pushed further forward, playing as a second central striker.

Joe Gelhardt certainly has an eye for goal, and he is not deterred by playing at this level. Not only does he have a great left foot, but he also has an eye for a pass. Will Cook be tempted to put the young player in the starting line-up against Charlton, playing behind the central striker?

Is football returning away from home?

Wigan Athletic’s poor away performances over the past twelve months have been typified by a reliance on the long ball. Moreover, signing a 6ft 5in centre forward has further invited under-pressure defenders and midfielders to lump the ball forward.

However, at Hull we saw signs of football returning, albeit riddled with errors. The possession stats showed Wigan at 58.3% and Hull 41.7%. Moreover 74% of Wigan’s passes were successful compared with 65% for the home team. In the previous game against Barnsley Latics’ successful pass stat stood at 64%.

The long-ball approach away from home has been woefully unsuccessful and we can only hope that the manager will insist that his defenders and midfielders minimise their use of the long ball. Nevertheless, it will take courage from players to play the ball out from the back, who have so often taken the easy way out.

The attacking play of Nathan Byrne and Gavin Massey was crucial to Latics’ winning the League 1 title in 2017. Indeed, Byrne went on to be voted Player of the Year. Last season was a difficult year for each of them, with Byrne losing his place to Reece James and Massey having a lot of time out injured. However, with James later being moved to midfield Byrne was able to reclaim the right back position. Massey’s return to the team saw him renew the link-up with Byrne, the two players knowing each other’s games so well.

The Byrne-Massey partnership has had a difficult start to the current season. Neither player has been at his best up to this point. Much of the opposition threat has come from their side of the pitch and their build-up work has not been at its best.

Recovering from injury Massey missed pre-season and still does not look like he is firing on all cylinders.

None of the wingers in Cook’s squad has shown real consistency this season. Michael Jacobs has blown hot and cold, Jamal Lowe has looked out of place on the left, Anthony Pilkington continues to be bogged by injury and Kal Naismith has been used sparingly.

Given the physical demands on the wingers, being expected to track back to help the full backs but also to go sprinting forward, Cook might be well advised to rotate them on a regular basis. With either Massey or Lowe on the right and Jacobs or Naismith on the left he has good options.

In the meantime, Cook will have to decide whether to stick with a below-par Byrne, in the hope that he will regain form, or bring in the young Chelsea loan player, Dujon Sterling, who has not even been appearing on the bench. 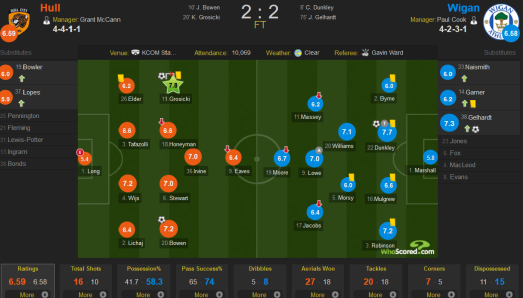