I first saw John Sheridan play in March 1987 when second division Leeds United visited Springfield Park for a 6th round F.A. Cup match. Under the management of Ray Mathias third division Latics had knocked out first division Norwich in the previous round. However, on a wind-swept day, in front of a crowd of 12,479, they were beaten 2-0. The Leeds side was workmanlike with Sheridan adding class in the centre of midfield.

A year later, after seven years at Leeds with 230 appearances and 47 goals under his belt, he moved to join Brian Clough at first division Nottingham Forest for a fee of £650,000. Sheridan only made one appearance for Forest before he joined Sheffield Wednesday, where he was to spend seven years making 199 appearances, scoring 25 goals, including a scorcher which helped the Owls beat Manchester United in the 1991 League Cup final. After spells at Bolton and Doncaster he completed his playing career at Oldham Athletic where he spent six years, retiring in his fortieth year. Born in Manchester, of Irish parents, Sheridan made 35 appearances for the Republic of Ireland.

It was at Oldham where Sheridan began his long managerial career. 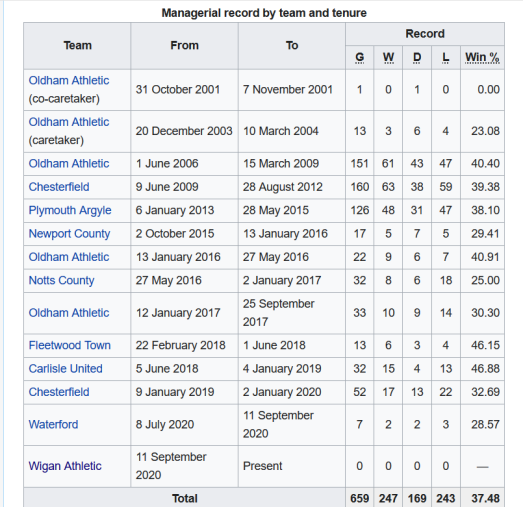 John Sheridan has not been the kind of manager to take charge at a club high-flying in its division.  His relationship with Oldham Athletic has been remarkable, spending different five spells there, so often steadying the ship. He won the League 2 title with Chesterfield in 2010-11, followed by the Johnstone’s Paints Trophy in 2012, but so many times he was brought in to help a struggling club.

After leaving Chesterfield he joined Plymouth Argyle in January 2013 on a short-term contract until the end of the season. Argyle were two points off the bottom of League 2 and had only won one of their last 16 games. Sheridan helped Argyle to avoid relegation by winning 8 and drawing 4 of their last 19 games.

In October 2015 he took over at Newport County who were bottom of League 2, with only 5 points from the first 10 matches. They got only one point from his first three games, but then went on a 10-game unbeaten run. They finished in 22nd place, nine points clear of relegation.

In February 2016 he joined Fleetwood Town who were 20th in League 1 having lost their last eight games under Uwe Rosler. By the end of the season they finished in 14th place seven points above the relegation zone.

Sheridan has certainly had his ups and downs as a manager. But he has experience of working under relegation pressure and producing results.

There will be Wigan Athletic fans who are less than enthused about his appointment. But given the instability of recent months at Wigan it is important to steady the ship and avoid a further relegation. Sheridan will work on a low budget, his team likely to be a mixture of youth and experienced professionals who have become free agents in the era of Covid-19.

Although the majority of last season’s squad has departed it would be no surprise to see more of them leave over the next couple of weeks as the club continues to cut back its wage bill. Sheridan will then have the opportunity to bring in some of his own players.

John Sheridan may not be a marquee appointment, but he could prove to be just what Wigan Athletic need at this moment in their history.