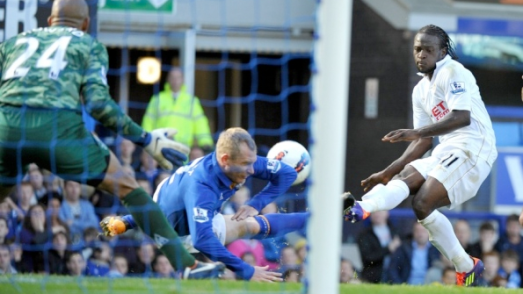 As expected, Everton were largely unimpressive, a side full of battle but completely devoid of imagination or flair. But they still managed to emerge with all three points, largely thanks to their aerial prowess and Latics’ reluctance to push forward in search of three points when they were there for the taking. It was a frustrating afternoon for the Latics faithful. Having watched their team contain Everton despite a makeshift defense with Maynor Figueroa in the centre, Adrian Lopez at right-back, and Patrick Van Aanholt making his Premier League debut at left-back, Latics had started the second period with genuine promise. You could feel the tension mounting at Goodison, and as Wigan created chances, it looked decreasingly likely that Moyes’ men would make a breakthrough. Victor Moses and the outstanding Patrick Van Aanholt both went very close but a deep cross from Tony Hibbert was met powerfully by big Greek centre-forward Vellios for Everton’s winner, late in the game. The crossbar then denied substitute Dave Jones an exquisite chipped equaliser, but as Latics desperately pushed forward, they left too much space for new Everton signing Royston Drenthe to put things beyond doubt.

Probably as important as losing the match, Hugo Rodallega was stretchered off with what appeared to be a serious knee injury. It has been reported that he has suffered ligament damage and may be out until Christmas, a devastating blow. The positive news is that Shaun Maloney was signed to play in the position Hugo has been occupying, while Franco Di Santo’s current form as lone centre-forward offers promise.

Despite defensive injuries to the three important defenders in Alcaraz, Boyce and Gohouri, the defense put in a valiant shift. While Maynor Figueroa was eventually beaten in the air for the winning goal, he had performed well at centre-back. Van Aanholt was a revelation, solid in his defensive work and very clearly a talented attacking threat as well. His crossing, dribbling, and shooting deserved greater reward in the second half.

Franco Di Santo has now scored three in four. His latest was another rocket, also slightly deflected, but his confidence and overall performance gives plenty of hope.

Rodallega’s injury. As frustrating as he can sometimes be, he is the club’s best forward and draws markers away from other attackers even when he’s not scoring. Victor Moses will need to start scoring in his absence, while opportunity beckons for Shaun Maloney and Albert Crusat. A report on a Colombian website quotes Hugo as saying the team doctor believes the injury not to be as bad as originally thought. It is believed the problem is with his meniscus rather than the ligaments. Lets hope so.

Roberto’s approach in the second half felt too cautious. Latics were creating chances and could have won this match with a little more adventure in the minutes leading up to Everton’s goal. A point wouldn’t have been bad — and Martinez’s mentality is understandable with a relegation battle so fresh in the mind — but these missed opportunities are starting to add up.

A Neutral Would Say

Save glimpses from Moses and Van Aanholt, not much quality in this borefest.

Ali Al-Habsi: 7 — Can’t blame him for any of the goals. Made a couple decent saves early in the game.

Adrian Lopez: 5 — Uncomfortable with the ball at his feet, his passing is not very good. He did alright defensively but  the return of Gohouri, Alcaraz and Boyce can’t come soon enough.

Gary Caldwell: 6 — The usual from the captain, who has already played with four different partners in the heart of defense this season.

Maynor Figueroa: 7 — Got beat in the air for Everton’s second goal, but at times looked a quality centre-back and played some very good passes that either did or should have resulted in dangerous breakaways.

Patrick Van Anholt: 8 — Excellent. Solid at left-back, dangerous when he got forward. He can cross, dribble and shoot by the looks of it. Unlucky not to score after a dazzling run that culminated in a right-footed shot just over the bar.

Ben Watson: 6 — Some neat passing at times, but would love to see him get forward more often, he has an eye for goal when he’s around the box.

James McCarthy: 6 — Remains this season’s biggest under-performer, although he deserves credit for the amount of running and tackling he did in midfield. Latics will need him to regain his attacking form soon though.

Jordi Gomez: 6.5 — Drew a lot of fouls as usual. Should be allowed to take all direct free-kicks as he is the only player with proven success from them.

Victor Moses: 7 — Dangerous, but yet again guilty of a little hesitation at the crucial moment. He has been very, very close in every match this season, surely the goals will come soon.

Franco Di Santo: 7.5 — Worked very hard for the team and was confident enough to beat his man and shoot from a tight angle for the goal. Decent performance.

Dave Jones: 7 — So unlucky not to score with an improvised chip immediately after Everton’s second goal. Clearly a cultured player with a lovely left foot.

Shaun Maloney: N/A — Hardly touched the ball in his 7 minutes on the pitch.