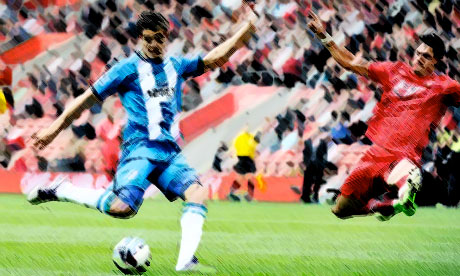 Saturday’s was a calm and measured performance in which, as time went on, the gulf in experience and class between the two sides appeared to widen.

Had Adam Lallana’s excellent long range strike not been expertly tipped onto the bar by Ali Al-Habsi in the first half, we might be telling a different story. As it was, Wigan limited Southampton to hopeful long range efforts or deep crosses in the first half, before pouncing early in the second and cruising from there on out.

Indeed there was a period of about 4-5 minutes in the second half as Latics pinged the ball around park when it was a like watching Spain — Southampton couldn’t get near them. Statistics will suggest Southampton had the better of the goal attempts, but each of Latics breakaways was incisive and dangerous, while the newly promoted side couldn’t find a way through. The first goal resulted from a cheeky Shaun Maloney flick, which Franco Di Santo raced onto and smashed into the roof of the net. The second was a little more controversial as new-boy Arouna Koné forcefully dispossessed a Southampton defender close to midfield before racing down the pitch to thump home.

This performance — as did the final 80 minutes against Chelsea — mirrored the excellent form that kept us up last season. The passing, midfield pressing and levels of concentration were outstanding. The finishes from each striker were as emphatic as any in our Premier League days. New signings Koné and Ramis got another 90 minutes under their belts and performed well.

Not much, really. I felt Victor Moses was missed in the first half and would have been a useful outlet when the team was trying to weather the early storm. Some matches will require players with a bit of dribbling and pace, and the hope is that players like Albert Crusat, Ryo Miyaichi or Callum McManaman can fill that void. But overall we can safely say the squad is strong and full of options, and didn’t miss Vic in this particular fixture.

Ali Al-Habsi: 8 — Fantastic. Kept Wigan in it, and ahead, with some brilliant reflex saves. Wisely punched away long range efforts in rainy conditions.

Antolin Alcaraz: 7.5 — Very strong and assured performance from the Paraguayan. It was a pleasure to watch all three centre-backs stroking the ball around, their distribution was excellent.

Ivan Ramis: 7.5 — See Caldwell and Alcaraz. A much more assured showing after that difficult debut against Chelsea. Looked the part.

Maynor Figueroa: 7 — Didn’t get forward quite as much as we’d like, but didn’t let anyone down.

Emmerson Boyce: 7 — Typically solid, played a delicious chipped cross from a tight angle in the second half that the strikers weren’t ready for.

James McArthur: 7.5 — Made some fantastic tackles in the first half, and enjoyed possession in the second.

Shaun Maloney: 7.5 — Quiet in the first half when the team was on the back foot, but excellent in the second before being withdrawn. As usual, provided the creative spark that put us ahead.

Franco Di Santo: 7.5 — An odd and interesting day for the Argentine. Accustomed to leading the line as target man, he played a wider role for much of the match with Koné ahead. We saw a lot less of him holding the ball up, chasing down defenders, and instead saw him pop up out of nowhere to score a very well-taken goal.

Arouna Koné: 7 — Improved as the match went on. His first touch let him down a few times, but he combined very well with Jordi, before smashing home late in the game. A hugely promising signing.

Jordi Gomez: 7.5 — Playing in-the-hole, he caused plenty of trouble in his half an hour on the pitch. A ferocious long range effort and fantastic through ball to Koné stand out.

Jean Beausejour: 7 — Nothing flash, but came on as a left winger and was neat in his play. Will be hoping to push his way back into the lineup, having proved his fitness.

Mauro Boselli: N/A — Only on the pitch for a couple minutes, but it was good to see him back. No doubt he will get a chance to shine against Forest on Tuesday.