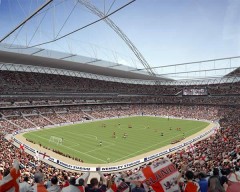 I paid my first visit to Wembley Stadium in 1967 when I went to watch Skelmersdale United – locally known as “Skem” – play Enfield in the FA Amateur Cup final. I had harboured visions of it being a wonderful stadium – it wasn’t –but the pitch really impressed me. It was like a bowling green, a great achievement by the ground staff in those days before the advent of pitch technology. I recalled watching FA Cup finals at Wembley when teams would visibly tire as the match progressed, players suffering severe leg cramps. The same happened in that Wembley final, particularly with the match going to extra time. The underdogs of Skem were to put up a wonderful performance, drawing 0-0, after Alan Bermingham could not put away a penalty. Exhaustion probably played a part in his miss. After playing on the biggest and most energy-sapping pitch in English professional football, Skem were to go on and lose the replay at Maine Road, 3-0. They were to win the same cup four years later.

My father used to say that Springfield Park’s pitch was as big as Wembley’s. He was close to the truth. In fact it was around 107 meters long and 66 meters wide, longer but narrower than Wembley’s. Latics’ non-league opponents at the time were clubs whose home pitches were typically around the regulatory minimum size of 100 by 64 meters. They faced a physical challenge when playing at Wigan on the big Springfield Park pitch. In those days pitch sizes also varied significantly in the First Division — West Ham and Tottenham typically had the smallest.

Premier League pitches are standardized  for the first time this season. Rather than go by the previous broad parameters (between 100-110 meters long and 64-75 meters wide) clubs are now required to have a pitch meeting the UEFA standard of 105 by 68 meters. However, there is a get-out clause in that clubs may be allowed to have pitches of differing sizes if the nature of construction of their ground prevents them meeting the new criteria. West Ham and Tottenham will once again have the smallest pitches, measuring just less than 101 meters long and 67 meters wide. Given the style of football his teams play, Sam Allardyce will not be unhappy that Upton Park cannot accommodate a regulation size pitch.

As one might guess, Stoke City have had the biggest adjustment to make, having previously reduced their pitch size to the previous minimum parameter of 100 by 64. Stoke are now going to play in a playing area which is now almost 12% bigger (7,140 square meters compared with 6,400). Other clubs had consistently complained to the Premier League about Stoke’s choice to play to minimum pitch size parameters. It will be interesting to see if this affects their style of play. Several other clubs have had to follow suit, being unable to cite the get-out clause.

When Latics moved from Springfield Park to the JJB Stadium in 1999 they were to find a pitch that was shorter but wider. It was quality, not size, that was to become the issue. The poor state of the pitch- which would churn up so frequently – began to give the club some degree of notoriety. In February 2011, Latics had the pitch dug up and relaid following a cup tie against Bolton. It was the second successive year that they had needed to do this. Some clubs might have left the pitch in a churned up condition until the end of the season, actually using it to their advantage. However, Roberto Martinez’s insistence that his team play good football made it paramount that they have a smooth playing surface. Dave Whelan clearly backed him up, commenting that “You don’t want to go into a game where the players cannot express themselves and cannot play the game they want to play or we want to play.” Whether the damage had been caused by geological or rugby-driven issues, Latics took advantage of the type of technology that allows for rapid repairs.

Since then the pitch has been much better. Hotels-n-Europe.com is a site that helps you find accomodation close to football stadia. In their information about the DW Stadium they tell us: “The pitch is a state of the art design and construction utilising a sand based matrix which contains an irrigation and under soil heating system. The pitch itself is a natural grass pitch with a 2% synthetic fibre infusion which helps to stabilise the pitch profiles.” Let’s hope that the reinforced grass pitch continues to hold up to the pressures put on it.

Wigan Athletic’s style of football is well suited to a larger pitch, with the wing backs able to hug the touchlines, stretching opposing defences. However, there is no evidence to prove that a larger pitch contributes to a better standard of football. Let’s wait and see if the new ruling has any effect on the quality of play from long ball sides such as Stoke and West Ham.

In Wigan Athletic’s case it has been pitch quality – rather than pitch size – that has mattered.