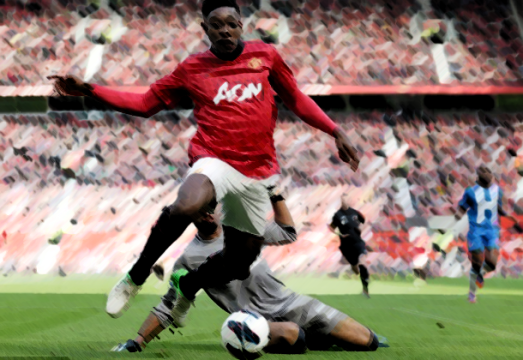 At times the second half of this  match seemed like a rerun of those intermittent disasters that we have witnessed  over the past three years. Playing at Old Trafford after an international break; against a team keen to get revenge after the 1-0 result in April; with a weak referee — all these factors appeared a recipe for disaster. And so it proved.

Antolin Alcaraz had been ruled out of consideration due of injury, so Latics put out the same lineup that played against Stoke two weeks ago — Ramis, Caldwell and Figueroa comprising the back three.

Whenever Wigan Athletic play at Old Trafford one almost expects penalties and red cards to flow. The penalty only took three minutes to come, Welbeck faking contact  as Al Habsi challenged. The Omani keeper made a good save from Hernandez’s penalty, Figueroa doing well to stop Nani taking advantage from the rebound. Latics continued to be put under pressure but managed to make some headway. Ramis headed narrowly wide and a cross from Beausejour found its way to Kone at the far post but he was unable to get his shot on target. It was to be 0-0 at half time and United had begun to look a little frustrated.

As is often the case it was the first goal that changed the match irreversibly. It came in the 51st minute. Nani was put through by a beautiful ball by Carrick, delivering  the kind of  low cross-shot that goalkeepers hate. It was fumbled by Al Habsi, the ball falling to the feet of Scholes who scored easily.

United’s debutant full back, Buttner, seemed to have the freedom of the park on Wigan’s right. He miscued a shot in the 63rd minute but it went straight to Hernandez who put it in. Buttner had been played onside by Boyce, who had failed to get in line with his defence. United’s new signing was to have even more fortune in the 66th minute after he made a determined run past Boyce, McCarthy and Ramis to get to the by line. The normally excellent  Al Habsi will have nightmares over the way he fluffed Buttner’s shot, allowing it to go in from such a tight angle. The rout was to be completed in the 82nd minute when McCarthy made a casual pass across the edge of the penalty box to Ramis, who just did not react. The ball was picked up by the debutant Powell, who had all the time in the world to put in a good shot from outside the box to Al Habsi’s right. On a good day one sensed that the Omani would have saved it.

In the last 3 minutes Welbeck made an appalling “red card’ tackle on Di Santo. Unfortunately, justice was not done and he received a yellow. It was fortunate that the young Argentinian was not seriously injured by the tackle. The Argentine had also been clattered from behind in the box earlier in the second half, but not penalty was given.

Despite an horrendous penalty decision against them in the first three minutes Latics held firm during the first half. They managed to keep their discipline and spirit despite refereeing that consistently favoured the home side. Some of Paul Scholes’ tackling during the game has subsequently been described as “thunderous” by certain elements of the media. “Dangerous” might be a more appropriate word.

In the end, each team received two yellow cards. One feared worse for Wigan.

All four goals were gifts. Once that first goal went in the match was only going to head in one direction. Latics looked tired and bedraggled in the second half.

From a Wigan Athletic supporter’s point of view this was a match best forgotten. Let’s keep the faith and look forward to a fresh start against Fulham at the DW this coming weekend.

Ali Al Habsi: 5 – a terrific penalty save, but not a good afternoon for the normally excellent keeper.

Emmerson Boyce: 5 – despite a wonderful jinking run and effort in the first half, it was an afternoon to forget for this player who has been a revelation over the past months.

Ivan Ramis: 5 – together with Boyce, was unable to stem the flow of opposition attacks on the right hand side of defence.

Gary Caldwell: 5 – not up to his usual high standard.

Maynor Figueroa: 6 – the best of an overrun backline.

Jean Beausejour: 6 – played some dangerous crosses into the box but did not look fully fit and went off after 69 minutes to be replaced by David Jones.

James McCarthy: 5 – the Jimmy Macs were unable to wrest the midfield initiative from the experienced United trio of Carrick, Giggs and Scholes. Both gave the ball away on occasion a little too casually.

Shaun Maloney: 5 – taken off after 59 minutes for Jordi Gomez.

Arouna Kone: 5 – his first half chance was not easy, but it would have changed the game if he had taken it.

David Jones – once more failed to impress after coming on for the last 20 minutes.