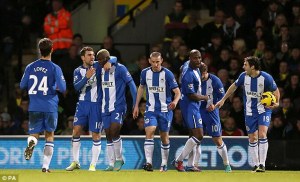 In stoppage time Arouna Kone looked odds-on to net the equalizer, after being put through by a great flick by Franco Di Santo. It might have helped Wigan get a result they would have scarcely deserved following a lacklustre performance. In the event Kone was blocked by a great tackle by Sebastian Bassong, who together with his central defensive partner, Michael Turner, had blunted so many Wigan attacks.

Norwich are a pretty ordinary team, but they have been in a good run of form and have that kind of self confidence and belief that Wigan lack. Once again the Wigan defence gifted the opposition their goals. An error by Boyce enabled the excellent Hoolahan to put through the predominantly right footed left winger, Pilkington. Al Habsi will be kicking himself for not stopping Pilkington’s left footed shot. Norwich had been easily the better team in the first half.

Wigan lost  James McCarthy to an ankle injury after a nasty tackle from midfield enforcer Bradley Johnson, with David Jones replacing him at half time. A second change made during the interval was to take off the ineffective Gomez and replace him with Maloney. The diminutive Scot was to make a difference with a rasping shot in the 61st minute to bring Wigan level. For a little while the roles were reversed and Wigan looked the better team.  However, poor defending allowed Norwich back in the game. Wes Hoolahan is 5 ft 5 inches tall,  but nevertheless managed to outjump Maynor Figueroa and the Wigan defence to put the  ball in the net, after Pilkington had too easily found his way past Boyce to put over  a right footed cross.

A cracking goal from Shaun Maloney. Arouna Kone adapted well to the Di Santo role, using his dribbling abilities to run at the opposing defence. It was good to see Mauro Boselli given a chance after being left out in the cold so long, although he looked rusty and was taken off after 72 minutes. .

The lack of defensive cohesion is costing Wigan dearly. It would be unfair  to point the finger at individuals who have operated in the back three this season. However, it has been that lack of cohesion that has led to soft goals being gifted to opponents. The back three that was the fulcrum for Wigan’s revival last season – Alcaraz, Caldwell and Figueroa –  has not played together this season.

Ali Al Habsi: 7 – made some outstanding saves, but should have done better with opening goal and later fluffed a cross that should have led to another Pilkington goal. Not at his brilliant best, but still Wigan’s best player on the day.

Ronnie Stam: 5 – disappointing. His crosses were not up to his usual standard.

Adrian Lopez: 5  – pacy and committed, but lacks aerial presence. Together with Figueroa should have cut out Norwich’s second goal. Pulled a hamstring in added on time.

Maynor Figueroa: 5 – unimpressive. He has played too much football over the past year and needs a break. However, he is not going to get one until Wigan’s injury woes subside.

Jean Beausejour: 4 – out of touch.

James McCarthy: 6 – fine until crocked by injury in first half. Went off at half time.

James McArthur: 6 – tried hard, but it was not his best day.

Jordi Gomez: 4– ineffective and lightweight. Taken off at half time.

Arouna Kone: 6 – looked lively in this more “roaming role”. Not afraid to take on defenders. Got another assist with his cut back to Maloney for Wigan’s goal.

Shaun Maloney: 6 – his goal revealed his excellent technique. Worked hard to get Wigan moving, but to no avail. Why wasn’t he on from the start?

Franco Di Santo: – came on for Boselli. Put a lovely pass through for Kone in the dying moments.