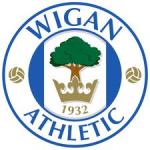 Over recent years Wigan Athletic have typically been cast as the underdog, but nevertheless capable of slaying the biggest of giants. A second successive FA Cup victory over that Goliath of English football, Manchester City, shows what Latics can continue to do when the odds are stacked against them.

However, in tonight’s encounter at the DW Stadium it is Latics who will be the giant Goliath, with little Yeovil playing the role of David.

Like Latics, Yeovil have come a long way over the years. In fact their path up the ladder has been somewhat slower. It took them 108 years to get into the Football League after being founded in 1895. However, they  got promoted to League 1 at the end of their second season  there. They finished fifth in their first season in League 1, but languished in the bottom half of the table for the next six years.

Under manager Gary Johnson Yeovil won the League One play-offs last season. Remarkably they did that on an average crowd of 4,071 and with a budget reputed to be less than £1m.

“We’re definitely going in as the underdogs, but we said that in League One let alone the Championship. We’ve got to embrace it as a club and we’ve got to be excited about it.” said Johnson in summer.

The odds are that Wigan Athletic will be too good for a Yeovil team which stands in 23rd place, three points away from Millwall, the nearest club above the drop zone. Figures have been bandied about the social media contrasting the vastly different budgets of Latics and Manchester City. It would be interesting to get a comparison between tonight’s two clubs. Underpinned by parachute payments Latics have a large squad of players who are relatively well paid for the Championship division. The combined salaries of a handful of those players probably exceeds that of the whole Yeovil squad.

However, Lady Luck has once more stricken Wigan Athletic with a series of injuries. The excellent Leon Barnett limped off at Ipswich on Saturday and could be out for weeks with his hamstring injury. However, Latics have adequate cover in central defensive positions and Thomas Rogne will probably step in. Ivan Ramis had another good game at the weekend, but Uwe Rosler will have to weigh up whether he wants to risk the Spaniard in his second game in three days. Emmerson Boyce and James Perch are due to be rested, but Rosler will not want to disrupt the understanding that has developed in a settled defence by making too many changes. However, his hand may be forced.

It is in midfield that injuries are hitting hardest with Ben Watson, Chris McCann and Roger Espinoza unavailable. The press reports that Rosler is about to sign Jack Collison on loan from West Ham.  Although still only 25 years old Collison has made over 100 appearances for the Hammers. Not only is Collison experienced but he can play in either wide or central midfield. It is understood that Collison’s contract is up at the end of the season and that West Ham will probably release him. The situation parallels that of Martyn Waghorn, signed under similar circumstances on loan from Leicester in January. It appears to be another shrewd move by the East German.

Callum McManaman and Nicky Maynard are due to return, forming two of the front three. Nick Powell is likely to join them some time during the match. Josh McEachran is due to return in midfield and Jean Beausejour at left back.

It is unusual for Wigan Athletic to be playing the role of Goliath in a league match. They will need to roll down their sleeves to carve out a victory against a Yeovil side that has nothing to lose. Nobody expects the Somerset team to come out with a result, but Latics will surely know how Yeovil feel as the underdogs.

It promises to be a fascinating encounter.