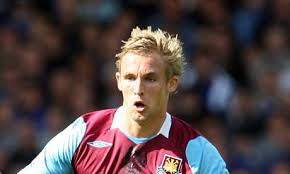 In order to learn more about him we reached out to the “West Ham Till I Die” fan site. Our thanks to Sean Whetstone of that site for his contribution below:

Jack Collison joined West Ham United in 2005 as a fresh faced 17 year old after Peterborough disbanded their youth setup. West Ham Academy Director Tony Carr was impressed with him to offer him a one year scholarship.  He broke through to the first team in 2007 to face Bolton.

In June 2009 he signed a five year contract which expires this summer, during an away win at Wigan in 2009 he dislocated his kneecap while attempting to chest down a long ball and was ruled out for six weeks. To be honest he has never been the same player since that injury and has struggled with his knees for the past 5 years.

He has a special training programme and careful management to keep him match fit. In 2012 he was told told he has a similar knee injury to those that plagued Spurs captain Ledley King who retired age 31.

Sam Allardyce was quoted as saying “He has a problem that is going to stay with him for the rest of his career. He manages it brilliantly, but there are times when he gets a lot of fluid in there and he is not available for training. It is us managing that side of it. His knee, unfortunately for Jack, is never going to be 100 per cent so he has to do a management job. It is not as drastic as, in the past, Paul McGrath or Ledley King, but it is similar. He is gutted, obviously. He is almost like the forgotten man.”

In 2013 Collison himself commented on his knee situation saying “I’ve heard that before about my knee, I expected the comparisons to Ledley and I suppose to a certain extent it is true because I have to manage my knee, but I think loads of footballers are in that position, where you have to be very concerned about an injury.“I have to box a little bit clever and be smart with the injury, but at the moment I feel as good as I have done in two or three years and that’s encouraging.”

In October 2013 he was loaned to AFC Bournemouth for who he played four games before returning to West Ham. He remains a fan’s favourite at West Ham and we always sing his name calling him Jacky Collison but his injury means he may not have lived up to our expectations to make him a West Ham legend from our youth ranks.

No-one expects him to be offered a new contract in the summer and he will be available on a free transfer looking to match his £20,000 per week wages which I assume Wigan will be picking up for the remainder of the season.