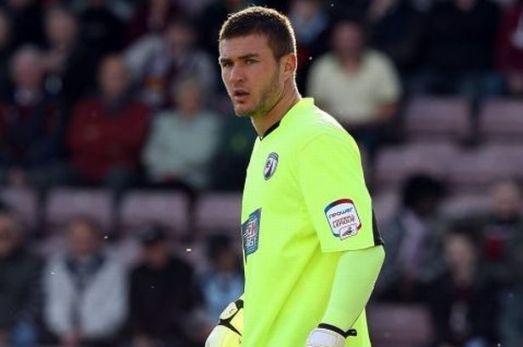 “Delighted to have agreed a deal to join @LaticsOfficial for next season. Can’t wait to start and help get them back where they should be….”

O’Donnell is a 6 ft 2 in goalkeeper, born in Sheffield, who will sign Wigan Athletic as a free agent from League 1 club Walsall. He is 26 years old, a product of the Sheffield Wednesday academy.

As a young player from O’Donnell was sent on loan to seven clubs in the lower divisions and non-league from 2007-11. He made his Football League debut as a 19 year old for Oldham Athletic against Luton Town in March 2008. It was three years later to the month that he made his debut for Wednesday in a match at Southampton. After making 19 appearances for the Owls he was released in May 2012.

O’Donnell then signed a one year contract for League 2 side Chesterfield. Covering for the absence of regular goalkeeper Tommy Lee he made 14 starts, but lost his place on Lee’s return from injury. In January he was loaned out to Stockport County in the Conference where he made 20 starts. He returned to Chesterfield for the last game of the season in a 4-0 win over Exeter.

In summer of 2013 he joined Walsall where he was to establish himself as the first choice goalkeeper, making 90 appearances in his two seasons there. He kept 21 clean sheets last season.

In order to learn more about O’Donnell’s time at Walsall we reached out to the BescotBanter.net fan site (@BescotBanter). Our thanks to them for the fan’s view that follows:

Following the Saddlers’ acquisition of goalkeeping coach Neil Cutler, Richard joined the club in the summer of 2013 and quickly went on to establish himself as first-choice, bringing his brand of committed stopping to the side.

A player who is willing to put his body on the line, Richard made over fifty first team appearances during his debut season with the club and penned a new eighteen-month contract in January 2014.

Following his debut season Richard continued as first-choice goalkeeper and went on to make his one hundredth consecutive first-team appearance for the club as the Saddlers played host to Notts County on 3rd April.

Richard established himself as a clear fan favourite during his time with the club and went on to be named both the Fans and Players’ Player of the Season at the 2014/15 End of Season Awards.

O’Donnell also came close to single-handedly breaking a club record for most clean sheets in a season, which was held by former Trinidad and Tobago international Clayton Ince, who was unbeaten on twenty-two occasions during the 2006/07 campaign.

The record was ultimately collected by Craig MacGillivray, as he kept a clean sheet during his debut against Oldham Athletic.

Following a lengthy spell of contract negotiations, which began in November 2014, Richard made the decision to leave the club and join Wigan Athletic on a three-year deal, the move seems to have come down to a length of contact issue, with the Saddlers either unable or unwilling to match the Latics’ three-year offering.

When the dust of his move settles Richard will go down as one of the best stoppers in the club’s recent history, and will always be welcome at Banks’s Stadium.