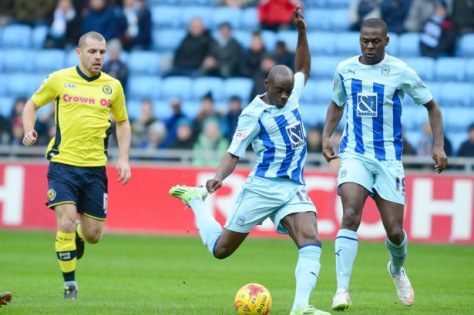 According the Sun newspaper Latics are about to sign 22 year old  Sanmi Odelusi  from Bolton Wanderers for £50,000 on a three year contract. Odelusi is a 5 ft 11 1⁄2 in tall winger.

Oluwasanmi Babafemi Oluwaseu Odelusi was born in Nigeria but brought up in Dagenham. After being part of the youth setups at Reading and QPR he joined Bolton in 2009. Odelusi was to make nine appearances for Bolton, scoring two goals. In February 2014 he joined MK Dons on loan, where he started in six matches and made four appearances off the bench in a three month stay. For the second half of last season he played on loan at Coventry, making four starts and ten appearances as a substitute, scoring three goals.

If the newspaper reports are correct then Latics will be taking a gamble in signing a player on a long term contract who has had such little first team experience. But Odelusi clearly has talent. The question is whether he can establish himself and add consisitency to his game.

In order to learn more about Odelusi’s time at Coventry we got in touch with the Covsupport News Service at at http://www.coventrycity-mad.co.uk/

Sanmi Odelusi, was very much in and out during his loan at Coventry City.   He could not have asked for a better debut after joining the Sky Blues on loan in January from Bolton, showing some class to finish smartly in the 38th minute of a 2-2 draw with Rochdale.

But from then on, he was soon out injured with a hamstring injury and struggled to command a regular place in the side.

Odelusi showed that he has good ball control and a neat touch along with a good finish especially in the win at Chesterfield and the defeat to Port Vale but could not convince Tony Mowbray, who took over from Steven Pressley as Coventry City manager that he was worth anything more than a place on the bench.

A decent lad, if he can keep his fitness then he could thrive at Wigan.