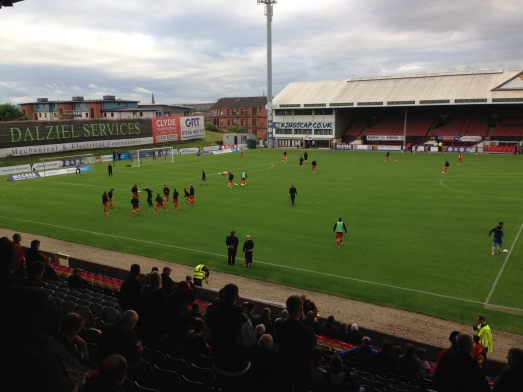 What an enjoyable time it was last night at Firhill. The pleasant and friendly atmosphere at the stadium was lifted even further by a bright performance from a young Latics team.  They played not only with organisation and enterprise, but with no mean level of skill.

The last time I went to watch a football match in Glasgow was not long after England had won the World Cup. I had travelled down from Dundee with a couple of friends from university to watch a tense England-Scotland game at Hampden Park. The atmosphere was totally intimidating for an England fan. Being naïve at the time we had not realized that the tickets we had bought were at the Celtic end, where we stood among fans wearing colours of both club and country. We were perhaps wise to keep a low profile as the crowd was to constantly jeer the German referee, Rudolf Kreitlein, whom they thought was allowing England too much leeway. It ended in a 0-0 draw.

Hampden Park was certainly a scary venue to visit at the time for an Englishman living in Scotland. But that was a long time ago, so when one of those same two friends told me a week ago he would join me on a trip to our old haunts in Dundee I suggested we combine it with a trip to Firhill. I had watched Partick Thistle play at Dens Park and Tannadice so many times during my seven years in the port city. They were one of my favourite visiting teams, always seemingly intent on playing good football, easily identified by their distinctive red and yellow shirts.

Firhill is nothing like Hampden. It is a small stadium with a capacity of around 10,000. Thistle have not actually played in Partick since 1908, when they moved to the Firhill Stadium in nearby Maryhill. Being less than half an hour’s walk from Sauchiehull Street it is closer to the city centre than Ibrox or Celtic Park. They are a small club in a big city, living within their means, without inflated ambitions.

Gary Caldwell set up his team in a 3-5-2 formation. Lee Nicholls was in goal. There was a return to the starting lineup for both Leon Barnett and Chris McCann, who lined up in a back three marshaled by the dominating Craig Morgan in the centre. Loan singing Jonjo Kenny played at right wing back with Jordan Flores on the left. The second loanee, Francisco Junior, was to play in front of the back four, with Ryan Jennings and trialist John Lundstram pushed a little further forward in midfield. Billy Mckay and Louis Robles played up front.

With such a mixed lineup it seemed inevitable that Latics would lack some cohesion, but they were well organized and every player seemed to know his role. Both teams were there to try to play good football and it was an open contest. As the game progressed Latics were to gain more cohesion. A slow start had been inevitable.

Junior was a tireless worker in midfield, not only through tackles and interceptions, but also in making himself available to receive the ball from the defenders in tight situations. It is the type of midfield play that was lacking last season. Kenny attacked with gusto and looked a fine player, although at times he left Barnett exposed. Flores worked hard in an unfamiliar role.

Morgan was captain for the night and will clearly be the main pillar upon which the defence will be built this season. McCann played with more enthusiasm than we have seen from him for a long time. Uwe Rosler had used him at times in that role on the left of the backline of three, where his steel in the tackle and cultured distribution come to the fore. On the other side Barnett was strong in the air but looked vulnerable under pressure. Like so many other players at the club, Barnett lost his confidence last season and just did not look like the player he was in 2013-14. On the positive side at least he was given some game time to try to get himself back in shape.

Nicholls was dominant in goal, constantly calling for his defenders to get in position. He had no chance for Steven Lawless’ goal not long after half time, the shot passing through Barnett’s legs, with the keeper unsighted.

Lundstram looked useful in patches, but could not impose himself on the game, being taken off at half time for David Perkins. It was Jennings who was to catch the eye in an unfamiliar central midfield role where he had the licence to run at the opposition defence. He scored a fine goal in the 51st minutes following Thistle’s opener, receiving a layoff from Robles on the edge of the area, his low shot beating the keeper. The 20 year old will surely now be challenging for a regular place in the lineup.

Perkins’ signing was hardly greeted with universal approval by fans, looking like another journeyman was arriving as in the days of Malky Mackay. But what we saw last night was a hard working holding midfielder with a nice touch on the ball, fitting seamlessly into Caldwell’s style of play.

Billy Mckay looked lively, willing to run at the defence, but he let himself down by skewing his shot wide of an open goal from Robles’ cut back. Robles himself was industrious and gave a good account of himself.

The second half saw a slew of substitutions for both sides, but the good football continued with Latics getting on top. Will Grigg had come on for Mckay after 60 minutes and came close twice, one shot being smothered by keeper Cerny, another effort going narrowly wide. With a little more match fitness Grigg will surely convert such chances. It is refreshing to see a Latics striker who knows where to position himself to score goals.  Craig Davies came on in the final quarter and his physical presence complemented the bright and intelligent footwork of Grigg. If both can stay fit they will provide Latics with a real cutting edge.

Max Power had come on after 60 minutes and really looked the part. Power is well built, not easy to knock off the ball, and has the kinds of incisive passing skills that have been lacking at Wigan over the past twelve months. The player is only 21, but having played so many times at senior level for Tranmere, he is not afraid to display his considerable skills. He will surely be the main contender for a more creative, advanced midfield role.

In the end a 1-1 result was probably fair to both teams. It was an entertaining game and although Latics employed 16 players during the course of the proceedings their football was good to watch.

Pre-season friendly matches can so often give a skewed view of what is going to happen when the season proper gets underway. But the dominant performances of senior professionals like Morgan, McCann and Perkins together with the youthful promise of Flores, Jennings and Robles augur well for the future.

One wonders if McCann is now back in the fold, or whether he was put in the shop window in this game. Last season was a nightmare for him, but he showed yesterday that he can still represent Wigan Athletic with application and no mean level of skill.

It is likely to be a very different starting eleven at Dundee on Friday. Last night’s display has certainly whetted one’s whistle for what is to follow.