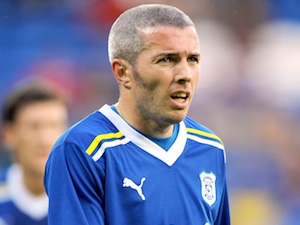 It has been announced that  32 year old Kevin McNaughton has signed for Wigan Athletic on a one year contract, following a trial period at the club.

Given the youthful nature of his squad Gary Caldwell will be looking for some more experience and McNaughton can certainly provide it, having played more than 450 games in his career. McNaughton made his debut for Latics in the pre-season match at Southport and subsequently played against Dundee and Blackburn Rovers.

The 5 ft 10 in McNaughton was born in Dundee, but came up through the Aberdeen youth system. He made his debut for the Dons as an 18 year old and was to make 175 appearances over 5 seasons.

McNaughton signed for Cardiff City in summer 2006 and manager Dave Jones used him regularly as a left back in the 2006-07 season. The following season saw him switched to right back and he played in all six matches in Cardiff’s run to the 2008 FA Cup final. His following season was dogged by injury but he reclaimed his place in the 2010-11 season when he was voted Player of the Year.

In September 2013 McNaughton went on loan to Bolton Wanderers, making 13 appearances during a three month stay. He went back to Cardiff in January and played in a handful of Premier League games by the end of the season.  Last season saw McNaughton return to Bolton on loan, where he made 8 appearances. He had made 254 appearances for Cardiff before being released this summer.

In order to learn more about McNaughton’s time at Cardiff we reached out to Benjamin James of the View from the Ninian fan site.

Here’s over to Ben:

What to say about Kevin McNaughton?

A player who most, if not all Cardiff fans, would have gladly kept. A player who came in unheralded and went on to become one of the most revered players of recent times. The very definition of a club legend.

The image of him on the pitch after our promotion to the Premier League is iconic – he, out of all those players in the squad, deserved it more than most. Near misses and play-off disappointments were felt most by him.

It looked as if for all the years he had given us, he was going to miss out on some Premier League action; a loan to Bolton looked to signal the end of his career at Cardiff City. But he returned and I was so happy that he got to play in the Prem for us.

I’ve seen him knock himself out in consecutive games, take out lino’s in his quest to get to the ball and outpace the quickest of players.

I can’t think of a bad word to say about him and I know I’m not alone in this. In an ideal world, Kev would have seen out his career with us. He became a true fan favourite in his nine years with the club and he will be missed.

He’s played all across the back four and even in midfield at points. He’s seen the best of times and some of the worst yet he’s stayed as consistent as ever. I really hope he succeeds at Wigan and Wigan succeed with him – he deserves nothing less.