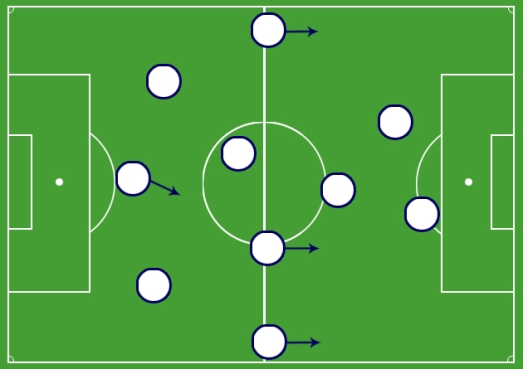 A bad start to the season is not uncommon for Wigan Athletic.

The beginning of the 2011-12 season was no exception. A  3-1 home loss to Wolves in early November was their eighth consecutive defeat and Roberto Martinez clearly had to look at changing something. The changes he made took some time to take effect, but in the end they were to underpin a remarkable turnaround in the team’s fortunes.

In the next match against Blackburn Rovers he brought in a back line of three central defenders, with Ronnie Stam and David Jones employed as wing backs. Stam had struggled as a conventional right back, but looked much more comfortable as a wing back where he had much more freedom to attack. Defending was not his forte. Jones was a central midfielder pushed into a new role, in which he never looked truly comfortable. Results improved a little, but by Christmas Latics were still locked in the bottom three.

By the time the January transfer window opened the fans were clamouring for new signings to reinvigorate a team that was heading for relegation. Martinez was to sign just one player, paying Birmingham City £2.5m for left winger, Jean Beausejour. It did not seem enough at the time.

However, Martinez knew that Beausejour had played as a wing back for Chile. He immediately replaced Jones in that position and made it his own. Stam’s defensive limitations, even as a right wing back, were to persuade Martinez to bring back Emmerson Boyce. If nothing else, Boyce could provide more stability to a defence that was hemorrhaging goals.

By mid-March and the introduction of Shaun Maloney the team was starting to play much better. The 3-4-3 system was working really well, not least because of the contributions of Boyce and Beausejour at wing back. When Latics were under pressure they would drop back to provide a back line of five, but still be available to link up with the central defenders to build up moves from the back. Their patient and skilful build up play was to prove a key feature in the amazing results the team was to achieve in avoiding relegation.

Boyce and Beausejour tucked in closely with the back three. If one advanced the other would stay put. Boyce was to show a range of skills that surprised so many of us – defensively solid and with a silky touch in attack. Beausejour rarely wasted a ball and his crossing could be reminiscent of David Beckham.

Sadly the era of Boyce and Beausejour is over, but the appointment of Gary Caldwell as manager has brought a return to a system involving wing backs.

On the tour of Scotland we saw the wing backs pushed well forward, much further than was typically the case under Martinez. The Scot has stated his preference for attacking football and deploying the wing backs in relatively advanced positions could be viewed as a consequence of that. But Martinez was facing high quality opposition and was rarely able to let his wing backs off a tight leash. Caldwell faces a different pressure – providing attacking football that delivers the goals that were so sadly lacking last season.

However, there were times in both matches where the wing backs were not dropping back sufficiently to receive the ball from the back three. The result was central defenders either looking for holding midfielders to receive the ball or playing it across their own back line, too often resulting into a back pass to the goalkeeper to punt forward. Moreover the central defenders were sometimes exposed to counterattacks as attacks had broken down with the wing backs stranded.

Yesterday Caldwell started with the youngsters Jonjoe Kenny and Reece James at wing back. Both have the ball skills, pace and energy to be effective wing backs, even if had not been their natural roles with Everton and Manchester United respectively. In the second half Kenny was replaced by the more conservative, but perhaps defensively stronger, Kevin McNaughton.

Thirteen out of the fourteen players who were involved in the action yesterday were new to the club. A certain degree of lack of cohesion was inevitable and so it proved with Coventry’s goals. Moreover Tony Mowbray had employed a Rosler-style high pressing game in the early stages that prevented the slow build up from the back.

Perhaps expectations of a good result at Coventry were unrealistically high. However, the sight of central defenders constantly passing the ball across the back line and to the goalkeeper suggests that they do not have sufficient passing options. In the days of Malky Mackay or Owen Coyle they would have often employed the hoof, so often resulting in the position gaining possession.

It is to Caldwell’s credit that he eschews that option. Despite the comments made on Latics Player/WISH FM, teams have achieved promotion out of League 1 playing the ball out of defence. Caldwell will resist the hoof and insist that good football is played. This is not to say that his defenders will not look to put forward a well measured long pass if a forward has moved into an appropriate receiving position.

Mowbray’s pressing tactics will surely be used by other teams to disrupt Latics’ game of building up from the back. It is to be hoped that Caldwell can develop a Plan B to deal with it.

History tells us that it takes time for players to adjust to playing in system that involves three central defenders and wing backs. Roberto Martinez learned that, but he persevered and it came good in the end. However, Martinez was not dealing with a practically brand new squad of players. His players knew each other’s games, even if the system they were playing under was tweaked.

It is going to take time for Caldwell’s new charges to effectively put his footballing ideas into practice. In the meantime it is to be hoped that he can look at providing more of a link between his central defenders and his wing backs. Perhaps a look at old videos from the “golden era” will show the wing backs what can be done against a calibre of opposition with which League 1 pales in comparison.

Yesterday’s team is the youngest Latics have fielded for some years, with six of the starting lineup being below 25 years of age. Young players make mistakes under the pressure of high expectations, as was learned last year under Uwe Rosler. It is to be hoped that the current crop are given time to settle, despite the expectations of the chairman and a significant number of fans.

With the fans clamouring for attacking football Caldwell is pushing his wing backs forward. The question to be posed is whether they are taking sufficient part in the build-up of moves from the back that will translate to goals up front.