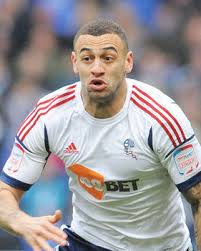 “He’s a big, strong boy who is also quick. He is different to what we’ve got and he’ll certainly cause defences some problems.”

The words of Mickey Adams, who certainly had some belief in Craig Davies as a footballer. He had signed the big man for Brighton in February 2009. Some 11 months later, after scoring just one goal in 10 league starts and 11 appearances off the bench, Davies was dispatched on loan to Port Vale, where once again he would be under the tutelage of Adams. Davies made an instant impression at Vale Park and ended his goal drought in his fourth game for his new club.

When Davies came on after 78 minutes against Bury on Tuesday night he did not receive an overwarm welcome from the crowd. Being an ex-Bolton player and the replacement for Grigg did not help his case. Moreover he had not impressed in the 35 minutes he was given as a substitute at Coventry. Some fans condemned him as being lazy. Another categorised him as a “journeyman” who has had as many clubs as Leon Clarke.

But on signing the big Welshman Gary Caldwell had said that “Craig’s a powerful striker who has a proven track record in this division. He’s an experienced player who will inspire those around him and we are absolutely delighted he has chosen to be with us.” Moreover he had later enthused about a Davies-Grigg striking partnership.

So who is the real Craig Davies – the inspirational central striker who can make a real difference to Wigan Athletic this season – or the journeyman who does not make enough effort on the pitch? Is he the 23 goal striker who was instrumental in helping Chesterfield win League 2 or the player who struggled for goals at Brighton?

Davies had begun his Wigan Athletic career as a 77th minute substitute in the pre-season match with Partick Thistle at Firhill. He immediately added a physical presence, although playing wide on the left. Gary Caldwell was being cautious in bringing Davies into play, given the constant injury problems he had last season.

It was therefore a surprise to see Davies start up front with Will Grigg in the match at Dundee just three days later. This time Davies played in the right hand twin striker role and was a real handful for the Dundee defence. He only played for the first 30 minutes, but during that time he had formed a positive impression, his interchange of passes with Grigg provoking a penalty.

So what kind of role will Davies play for Latics this season? When will he be fully fit and in contention for a place in the starting lineup?

Caldwell will continue to give Davies time to get himself in optimal physical condition. In the meantime he will use him as an impact substitute, either for a tiring Grigg or alongside him as a main striker. Up to this point Caldwell has tended to opt for a lone centre forward system, but he is nevertheless pragmatic enough to go for the twin striker scenario when needs arise. Grigg would surely benefit from the presence of Davies, who will ruffle the feathers of any defence, drawing defenders away.

However, there is more to Davies’ game than playing the target man and creating space for others in the penalty box. In his career he has scored 88 goals from 237 starts in league games. He had played for 12 clubs before joining Latics, hence the “journeyman” tag.

Davies will be keen to show that he is much more than just a journeyman. His signing was a gamble by Caldwell, given his career path and his injury issues at Bolton. But if Davies can get fully fit he will have the power and speed to cause a serious threat to opposition defences.

If nothing else Davies will provide Caldwell the option of going direct when the patient building up of play has failed to produce the desired results. Fit and at his best he is a force to be reckoned with.

Only time will tell if Caldwell’s signing of Davies was one of desperation, or of inspiration.