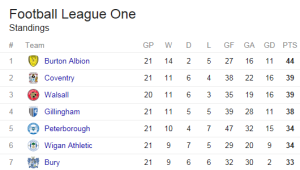 After playing 21 games Wigan Athletic lie in 6th place in League 1 with a record of W9 D7 L5.

They have the 3rd best defensive record in the division, together with Bradford City, having conceded 20 goals.

But there are 9 clubs who have scored more than Wigan’s 29 goals up to this point.

Gary Caldwell is a young and inexperienced manager who has had a mountain of a task to deal with. His first managerial appointment was at a Wigan Athletic in free fall, where the team had acquired a losing mentality with morale close to rock-bottom.

His brief was to move on as many of the ex-Championship and Premier League players on his staff as he could, in order for the club to be able to balance its books month-to-month. He was also to make sure the club did not go into the red on the transfer market  through outgoing fees exceeding the incoming ones. Moreover his chairman made clear his hopes that Caldwell’s new team might smash the division with 100 points. The chairman also wanted the new team to play football in “The Wigan Way”, signifying a major transformation from the “direct” style that predominated in the reign of his predecessor.

Caldwell has taken all this on his shoulders with dignity. He is bright and eloquent and may well have a glittering career ahead of him in football management. Up to this point he has brought in 21 new players, with economic necessities indicating that there will be more turnover in January. His team has not played consistently well so far, but results have been good enough to reach the playoff zone.

Caldwell, like his chairman David Sharpe, is aware that Latics have a tight timeline for getting back into the Championship division. This is their penultimate season for the receipt of parachute payments. Should promotion not happen this season or next the club will find itself in the same financial boat as others in League 1. Moreover in the case of it happening next season rather than this, it would mean Latics going into a Championship division without parachute payments, competing against clubs that have that huge advantage over them.

It is not surprising therefore that Caldwell has stated his aim of achieving automatic promotion this season, rather than next. What are the chances of Caldwell’s team achieving his aim? Is League 1 the kind of division where a team can make a rapid ascent of the table in the second half of the season? Is it realistic to expect Latics to overhaul Burton Albion and/or Coventry in those top two positions?

At this stage last season (2014-15) Bristol City and MK Dons led the division:

They were to hold those 1st and 2nd positions at the end of the season.  Moreover Preston, Swindon and Sheffield United were to hold their playoff places:

But the London club eventually finished 3rd, losing out to 4th place Rotherham in the playoffs. Wolves, loaded with big parachute money and ex-Premier League players, ran away with the division in the second half of the season:

Notably the top six clubs remained the same from December, even if some positions had changed.

In three of the past five seasons the top two teams at this time of year achieved automatic promotion at the end of the season. Leyton Orient had been overtaken in the top two by Brentford in 2013-14, but the gap between the two teams in December had only been one point. No team below 3rd place at the 21 game mark in December had achieved automatic promotion in those four seasons.

The exception was that of Bournemouth in 2012-13. In December they were lying in 9th place, with 32 points from 21 games. They were to finish in 2nd place, just a point behind Doncaster Rovers who had been in 2nd place after 21 games in December. The December leaders, Tranmere Rovers, had dropped to 11th place by the end of the season.

But how about promotion through the playoffs?

Last season it was 3rd placed Preston who won the playoff place. But interestingly for the previous four seasons it had been the team in 4th place that had won the playoffs.

Following an 11 game unbeaten run Caldwell’s team has not won for the last four. The expectations of the chairman and the fans weigh heavily on the manager. His squad is by far the most expensive in the division and they are expected to perform better. For a hard core of fans a failure to reach promotion this season would be a disaster. Others are more patient and will say that Caldwell needs more time to build a solid base that will not only serve Latics in the here and now, but in the long term.

The statistics over the past five seasons suggest that Latics are unlikely to achieve automatic promotion this year. Moreover there is statistically at best a one in four chance of them winning the playoffs.

However, Caldwell has a large and very able squad at his disposal, which is capable of defying the odds. He has repeatedly experimented, changing his lineups in efforts to try to get the best out of his players. What he rarely changes is the style of football.

Having been employed by his chairman to adapt the style of play from the ugliness of the Malky Mackay era, he has had to change the mindsets of so many players brought up on a more direct style. That remains a work in progress. The frustrations of constant backwards and sideways passing are frustrating to fans who crave for a faster tempo. In the days of Mackay a player under pressure would more often than not hoof the ball away, giving possession back to the opposition. In the Caldwell era they are more likely to retain possession, but too often to little effect.

The 32 year old Caldwell seeks to follow the example of Roberto Martinez who was appointed to his first managerial position at Swansea at the age of 33 in February 2007. Within 15 months Martinez had transformed the Swans style of play and they were League 1 champions by May 2008. He showed that it is possible to play skilful possession football in League 1 and be successful.

The task ahead of Caldwell is to have the whole at least equal the sum of its parts for his team. He will be aware that there are supporters who were never fans of the kind of football that Martinez’s teams played at Wigan. Moreover even the neutrals among the fans have been frustrated by then sterility of Latics’ play in recent matches. The running off the ball that is essential in possession football has been less evident and players on the ball have been unwilling to take risks, taking the easy way out with lateral or backwards passing.

Caldwell has lifted the gloom of the Mackay days and there are rays of hope for the future. His teams have shown a fierce determination to fight back when things have not been going well, something that last year’s outfits were unable to do. Although Caldwell’s teams can be criticised for failing to adjust their play in the bad weather conditions they have nevertheless shown their ability to grind out results. The draws at Bradford and Southend may not have been pretty to watch, but the determination was certainly evident.  However, the combined play of the team has not yet reached the heights one would expect given the talents of the squad as a whole.

But after 26 matches in all competitions up to this point, involving 31 players, the gelling process is not complete and players are still adjusting to Caldwell’s preferred style of play. Having a large squad can be seen as a significant advantage over other League 1 clubs, particularly as injuries come into play. However, the other side of the coin has been rotations of the starting lineup.

Doom and gloom continues to be bandied about on the message boards and social media. Some pundits are even suggesting Caldwell be dismissed,  despite his considerable achievements up to this point with Latics having a good squad of players, being only five points away from an automatic promotion place. Expecting instant results from Caldwell given the tasks that he has had to deal with is surely unrealistic.

If Caldwell can get his squad down to a size that will continue to give him a competitive advantage but alleviate the need for constant squad rotation, the gelling process will surely hasten. Given the range of players he has at his disposal he is unlikely to have a regular starting eleven. But certain players will form the backbone of the team, even if small adjustments are made from game to game.

But more than anything, Caldwell needs time. The question is how much time does he need for his team to gel into a promotion winning side.