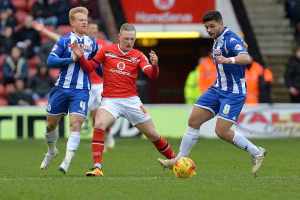 Photo courtesy of the Express and Star.

To the more discerning viewer the work of Sergio Busquets for Barcelona is crucial to the smooth running of the team. Granted their MSN forward line would take any defence apart, given decent ammunition. But that ammunition is dependent upon someone playing a seemingly simple role much deeper. Busquets plays the same kind of role that Pep Guardiola did when playing under Johan Cruyff. He is strong in the tackle, makes key interceptions and rarely wastes the ball.

On Saturday Sam Morsy played the Busquets role in an excellent Wigan Athletic performance at Walsall. He sat in front of the back four, nullifying Walsall’s attacks, making sure possession was retained. Moreover he put through pinpoint long passes towards the flanks. Had Will Grigg not been so profligate, with a handful of goal scoring opportunities, Latics would have been out of sight long before Yanic Wildschut’s stunning winner. But Morsy’s contribution in that Busquets role was crucial in stopping opposition attacks and launching his team forwards.

Morsy was signed at a knock-down price from Chesterfield, being in the final year of his contract. He was the captain and the driving force behind the midfield in a team that challenged for promotion last season. The Busquets role is not one he was used to at Chesterfield, where he operated in the holding midfield role where David Perkins and Max Power have excelled for Latics this season. But at Sheffield and Walsall, Caldwell opted to put Morsy in front of the back four, pushing the duo further forward.

Morsy is only 24, with his best years ahead of him. He gave an excellent account of himself at both of his previous clubs, Port Vale and Chesterfield. He is a player who has come through the lower divisions of the English football pyramid, but shows the capability of playing at a higher level.

Gary Caldwell and his recruitment team have done a wonderful job in building up a squad capable of gaining automatic promotion back to the Championship. They have signed a number of players in their early to mid-twenties. Should Latics get the promotion they seek, most of those players can be expected to make a mark on the Championship. Morsy ranks among them.

Sam Morsy has made an immediate impression on Wigan Athletic fans. He could be a key player for not only promotion, but for years to come.