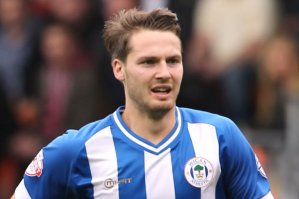 Owen Coyle had left it late, but he finally got his man on the last day of the summer transfer window in 2013. Nick Powell was 19 years old and still in Alex Ferguson’s plans. Manchester United had paid Crewe £6 million for his services in July 2012. Powell had made his debut for United just a couple of months later, scoring against Latics after coming on as a 71st minute substitute for Ryan Giggs.

“We see him as a central midfield player. Crewe played him as a forward in behind the striker, but I asked a question of [Alex director of football] Dario Gradi as to whether he thought central midfield was his position. That’s what he thinks, and Nick thinks that’s his position too, so we’re all in accord on that.”

Ferguson’s comment seemed to fall on deaf ears with Coyle, who was faced with injuries to his two main central strikers, Marc Antoine Fortune and Grant Holt. Powell was to be played as a centre forward, a position he had played earlier in his career. Over the next couple of months he was to establish himself as the club’s best striker, scoring three goals in Latics’ inaugural appearance in the Europa League. The disastrous Coyle reign ended in early December, but new manager Uwe Rosler continued to play him in the starting lineup. But niggling injuries started to take effect and Powell lost form. By the end of the season he looked a shadow of what we had seen in the short-lived Coyle era.

When Powell returned to Wigan a couple of weeks back many of us looked at his arrival as a boost for an attack so dependent on Will Grigg. Powell could step in as a centre forward, or play just behind the central striker. But in Powell’s first two matches against Blackburn Rovers and Birmingham City he was played as a central midfielder.

Although it was not a position he played in during his earlier days at Wigan, Powell has already looked the part playing there. It is his preferred position, although Gary Caldwell has acknowledged that Powell offers him flexibility through being able to play in different positions. However, if Powell is to be a regular starter in central midfield, who will be giving way for him?

Last season’s central midfield lynchpins were David Perkins and Max Power. They were joined in January by Sam Morsy, who had some highly impressive displays in the “Busquets role” in front of the back four. However, the ex-Chesterfield man also had some disappointing performances. However, many of us saw the 24 year old Morsy as a player for the future, someone who could add steel to the midfield, but who was also able to spray out pinpoint passes.

It was therefore a surprise to hear rumours that Latics were trying to sell Morsy. Both Chesterfield and Sheffield United have apparently matched Wigan’s asking price of around £400,000, but Morsy remains at Wigan, for the time being at least. Morsy will surely be loath to step back down to League 1, after reaching the Championship. He is within his rights to put his foot down and refuse to move on, having two years remaining on his contract at Wigan.

But over the past couple of years we have seen what a powerful machine there is at the club in “helping”, or maybe cajoling, players into moving on. The likelihood is that Morsy will be gone soon, with Latics recently signing a replacement in Shaun MacDonald.

The main contenders for a central midfield role are now MacDonald, Perkins, Powell and Power, with Tim Chow as back up. Alex Gilbey has so far been played a more advanced role, but could also challenge for a holding role.

The term “midfielder “ these days can include wing backs and other wide players. Yanic Wildschut is what might have been described in the old days as a “winger”, nowadays labelled as a midfielder, although he can also play a twin striker role. Michael Jacobs can also be classed as a winger, although his best position is probably in the hole between the midfield and the central striker. Ryan Colclough is usually played wide, but is another who might be more effective in an advanced central midfield role. However, Latics have now signed Jordi Gomez who can operate effectively in that role. Jordan Flores is a bright young talent, also an attacking midfielder. It could be a make or break season for Flores who has struggled with the physical demands of the game, despite his excellent technique and footballing vision. Andy Kellett will provide another option when he regains fitness after surgery.

Caldwell has such a wealth of midfield talent at his disposal that some would say it is an overload. Others would say that there are 46 games to play in a Championship season and you need to rotate your midfielders to keep them fresh. However, Morsy is not likely to be alone in leaving.

Caldwell continues to search for another centre forward of the quality of Grigg. Such players cost big money and he will be looking at raising funds to pay for it. It would not be a surprise to see other players from last season’s League 1 team following Morsy out of the door. In the meantime there could be loan moves for the some of the younger midfielders on the fringes of selection.

For the moment Latics have midfielders who have proven goalscoring records. Gomez and Powell both scored goals in their previous spells at the club and last season Colclough scored 9, Wildschut 7, Jacobs 8, Power 6 and Gilbey got 5. However, Caldwell will also look at protecting his defence and it would be no surprise to see MacDonald in the “Busquets role” if Morsy departs.

The transfer window is nearing its close. Having expected Caldwell to stick with the backbone last year’s team it was notable that the starting lineup in the first league game at Bristol City included five new faces.

Even more change is on its way.