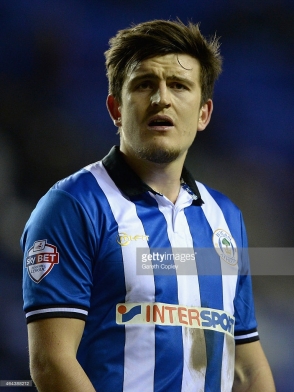 Maguire on loan at Wigan.

The fee associated with the move is reported to be some £12 m rising up to £17 m.

I must admit: it took me by surprise. Granted Leicester could probably use another powerhouse centre half in the ilk of Huth and Morgan. But has Maguire’s game improved that much since his spell at Wigan a couple of years ago? Is the price inflated?

Harry Maguire was signed on a short term loan from Hull City in February 2015. He was without doubt Malky Mackay’s best loan signing, forming a rugged central defensive partnership with Jason Pearce. He was excellent in the air, powerful in the tackle, but does he have the passing skills to make it as a top Premier League defender? Only time will tell.

Over the past three seasons Wigan Athletic have brought in no less than 30 players on loan. They have often been young players from higher placed clubs, being sent out for experience. Only 3 of those 30 went on to permanent contracts at Wigan: Emyr Huws, Stephen Warnock and Yanic Wildschut.

A statistical analysis shows that the average age of the loanees has been around 24, the odd 30-pluses such as Alex Bruce, Alex Revell and Liam Ridgewell being balanced out by teenagers such as Marcus Browne, Callum Connolly, Jonjoe Kenny and Sheyi Ojo.

The influx of loan players, particularly over the past couple of seasons, has been subject to much debate by Latics supporters. The clubs sending their players to Wigan on loan can make stipulations about first team opportunities for their players, with financial implications if they are not met. The situation with goalkeepers near the end of last season was perhaps the straw that broke the camel’s back as far as many fans were concerned. Moreover it has been felt that the presence of too many loanees has deprived the club’s own young talent of opportunities.

However, a new manager has come in. Will we see any change in the use of loan players under Paul Cook?

Last summer Cook made two summer loan signings for Portsmouth. The 36 year old goalkeeper David Forde was acquired for a season-long loan from Millwall, going on to make 47 appearances. Dominic Hyam, 20, was loaned from Reading, but made no appearances. Interestingly the January loan window saw Cook pick up Eion Doyle, 28, from Preston, who was to make 12 appearances. But the 19 year old Aaron Simpson, from Wolves, suffered the same fate as Hyam, making no appearances.

Among the theories put forward by Portsmouth supporters regarding the manager’s surprise exit was that the new ownership would appoint a director of football. It was an idea mooted at Wigan too, but did not come into fruition. However, as manager at Wigan he will need to take a look at the link between the recruiting department and the coaching staff. Not only have experienced players been signed who have not made their mark, but those who could be loosely labeled “players for the future” have been given minimal opportunities on the field of play.

The present squad includes players like Jack Byrne, Josh Laurent, Dan Lavercombe, Mikael Mandron, Sanmi Odelusi and Kaiyne Woolery. All were seemingly signed for the future but have made hardly a handful of appearances between them. They are in their early twenties and were bargain signings from other clubs. Danny Whitehead also falls into that category, although he no longer appears in the first team squad on the club website. Yesterday’s new signing Terell Thomas, 19, will hope that he will receive more opportunity than his predecessors have had.

The current first team squad also contains six players who have come through the academy and the development squad – Luke Burgess, Callum Lang, Owen Evans, Josh Gregory and Christopher Merrie and Sam Stubbs. Last season Luke Burke made the transition to the first team, making an immediate impact at the start of the season. Sadly he was underutilized as the season progressed.

The futures of the “players for the future”, both homegrown talent and those brought in from other clubs, will depend on them being given opportunity to develop. Some will be sent off on loan to other clubs to get more experience, but far too often in recent years such players have not come back to have an impact on the first team. So often loan players from other clubs have been given opportunities in their stead.

An article from the Portsmouth News entitled “Pompey deny Wigan to retain coaches” has informed us that Robbie Blake nor John Keeley will be leaving Portsmouth, although physios Nick Meace and Andy Proctor may be on their way to Wigan. It says they are confident that head of player recruitment, Nick Howarth, will be staying.

Cook is gradually putting together his coaching and backroom team at Wigan. With the pre-season looming he will be keen to get that sorted as soon as he can. We can only hope that there is a better connection between recruitment and coaching than we have seen at Wigan in recent years. Moreover that there will be a planned strategy towards the recruitment of loan players from other clubs, bearing in mind the presence of the club’s own young talent.

The departure of Matt Gilks to Scunthorpe this week is indicative of the club being unwilling to offer him a contract as good as that put forward by the Irons. It appears that Gilks had a get-out clause in his contract in case relegation occurred. Having spent much of his career in the higher divisions he would have been accustomed to the kinds of salaries offered at those levels. Given such a scenario it is unlikely that Paul Cook will either be handed a large war chest for potential transfers, nor be able to offer salaries that give him a competitive advantage over other contenders in the division.

Yet again it is a time of change at Wigan, this time involving wholesale changes in coaching and backroom personnel. Moreover we can expect considerable player turnover over the coming weeks, with an exodus of the higher earners.

Of all 30 loan players at Wigan in the past three years it can be argued that Stephen Warnock and Yanic Wildschut made the greatest impact at the club. But Harry Maguire did a solid job and it remains to be seen whether he will ultimately be the most successful of those loan players in his career that follows.

Will Cook’s loan signings play an important role this season? Or will he prefer to utilize players he already has at the club?

Or will it be a healthy balance between the two?