It had been one of Wigan’s better away performances: a goal up after 25 minutes following a superb counterattack, the home team not looking like they were going to score. Then after 62 minutes Derby substitute Mason Bennett scored a truly spectacular goal that radically changed the game. Wigan’s fragile confidence was severely dented to such an extent that it was no great surprise that the home team scored again 16 minutes later with the Wigan defence all at sea.

Following the game Paul Cook commented: “At one stage, the whole picture looked great for us but unfortunately the picture changed completely. For long periods in the second-half, I thought we were going to score again – I thought we were getting in the right areas but the disappointing thing was Massey and Jacobs tired badly – as to be expected – and we are having to make substitutions. There are no excuses, though, we are at a good level of football and you have got to have something about you to see games out and unfortunately we haven’t been able to do that.”

Let’s look at some points arising:

On paper Derby had a stronger lineup than Wigan. Even without players of the quality of Tom Lawrence and Mason Mount they had enough talent to ask questions about a suspect Latics defence. Nevertheless, Derby came into this game after three consecutive league defeats and their play had been fraught with errors. With the home team so nervy and with Latics a goal up going into the interval it was an opportunity for a rare Wigan away win.

Wigan had been unfortunate to be deprived of the experienced and influential Danny Fox through injury after 33 minutes. Would the defence be able to withstand the Derby pressure in his absence? Mason Bennett is by no means a prolific scorer with a record of 6 goals in 90 league appearances. Latics can certainly count themselves unfortunate to have conceded a goal to Bennett that some might label a touch of genius; others might say it was a fluke. Wigan had their chances to win the game, but did not convert them, Leon Clarke being the principal offender in that respect.

In his post-match comments Cook told us he had expected Jacobs and Massey to tire.  Their pace and movement had reminded us of the tempo with which Latics had played early in the season. Both had been sadly missed but their presence could still prove crucial to Latics avoiding relegation. But knowing that both were going to be unable to complete the 90 minutes the manager did not have another winger on the bench to replace them. Kal Naismith had come on at full back for Fox and neither Callum McManaman nor Anthony Pilkington were on the bench.

With the squad that Cook has at his disposal Latics are always going to be hard pressed to get a result against a team in the promotion race or one that is at the top of their form. But this is not the first occasion that they have been unable to beat teams that have been nervy and short of confidence following a bad run of results. It started in early October when they lost 4-0 to a Preston side which had been at low ebb. They just have not been able to capitalize on the opportunities presented to them since then.

Having had some success with a back five in the previous outing it was a surprise that Cook ditched it, although it could be argued that his game-plan was working with Latics a goal up. Despite having one of his better displays against Middlesbrough Naismith was taken off after 60 minutes and found himself on the bench at Pride Park.  It can scarcely have helped the player’s confidence and he was not at his best in this match.

Having decided on a flat back four this time around, Cook retained his midfield trio of Reece James, Lee Evans and Sam Morsy. James did well but Evans and Morsy were distinctly below par. Evans in particular looked lost in his role in right midfield.

With a prior background in the lower leagues Cook has struggled with the tactical side of the game in the Championship. It scarcely helps that his assistant manager and first team coach come from similar backgrounds.  With a relatively low budget squad he has to get the best out of the players at his disposal if the team is to compete and avoid relegation. He also needs to adjust his tactical approach according to the opposition he faces.

Last season’s success was based on a 4-2-3-1 system, with a long-ball approach to 4-4-2 being the Plan B. Latics started this season successfully with 4-2-3-1, but injuries to Jacobs and Massey cut its effectiveness. Cook received some criticism for his tactics against Middlesbrough, packing the central midfield and using a backline of three central defenders, but a point was gained against a top team. Given the goals given away by a shaky defence over recent months it was a surprise that the manager had not employed such a shape in his previous starting lineups, particularly away from home.

Latics’ set piece plays have been so disappointing this season. Lee Evans used to be the main taker of corners and free kicks but Reece James has since taken over most of those duties. The centre backs still have not scored a goal, despite the number of opportunities they have had. Nick Powell’s enforced absence from injury has surely had an effect since he is probably the best header of a ball in set-piece situations.

A goal from a set piece is long overdue. Will it come at Reading on Saturday?

Although the result did not go Wigan’s way there were some rays of hope emanating from the performance. The sight of Jacobs and Massey running at defences at pace from wide positions was most welcome, as was another short appearance for Nick Powell.

Cook now has to decide how to approach the game at Reading. Will he continue with the ineffective Clarke at centre forward or will he opt for Joe Garner or even Powell in that position? One can only hope he will start with Jacobs, Massey and Powell and that Latics will go in with a positive approach. Should they get an early lead there remains the possibility of reverting to a back three/five later in the game, as the trio tires, with Jonas Olsson coming in off the bench.

Looking forward to next season

Should Latics manage to avoid relegation – which is far from certain at this moment – will Cook and his backroom team be in charge next season? The manager has been fortunate to have kept his job given the indifferent performances and results over these months. Should relegation occur then Cook’s experience in the lower divisions would prove useful. Should Latics stay up will Darren Royle continue to back Cook in the hope that he has learned from his mistakes this season?

Latics started the season with a considerable number of players who had not played at championship level before. They too will have benefited from the experience, tough though it might have been. 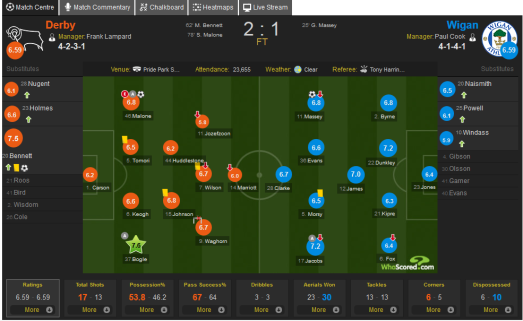