Yesterday we published a Barnsley fan’s view of Joe Williams. Williams played at Barnsley in the 2017-18 season, then at Bolton in 2018-19.

In order to learn more about Williams’ time at Bolton we contacted Chris Mann of the Burnden Aces fan site http://www.burndenaces.co.uk (@BurndenAces ).

Here’s over to Chris:

Joe Williams recently joined Wigan Athletic from Everton, signing a three-year contract at the DW Stadium. The time was right for him to move away from Goodison Park. Having spent the past two seasons out on loan at Barnsley and Bolton, respectively, it was clear to see he was a long way from Premier League quality.Wigan fans will no doubt have seen clips on YouTube of a stunning goal he scored whilst with the Tykes, but don’t get too carried away as it is the only one he has managed in more than 60 Championship appearances. There are some strong qualities to Williams’ game. He isn’t scared of a tackle, has a good engine and likes to get the ball on the floor, but a lack of consistency and potential disciplinary issues need to be ironed out.It’s difficult to truly judge any Wanderers player based on last season alone. The general consensus is that he has more in his locker than was shown at the University of Bolton Stadium, but with two relegations from his two years in the second-tier, he and you must be hoping it is a case of third-time lucky. 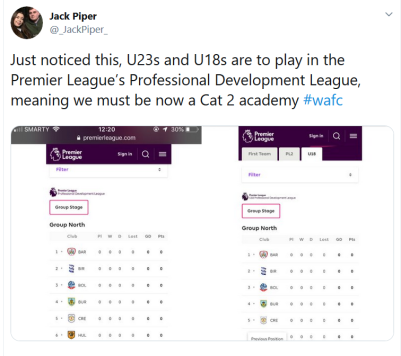 Well done, Jack, on putting this great news on Twitter. We await confirmation  from the club, but the transition from Category 3 to Category 2 is really going to help in the development of young talent.