Latics looked at least as good as the much more expensively assembled Bristol City until 77 minutes when the visitors scored. Given what we have seen before it was not a surprise when City scored their second two minutes later.

Paul Cook once again, to his credit, insisted his team try to play football, rather than hoofball. Latics had around 70% possession in the first half. Unfortunately, most of it was passing the ball around in their own half and they were lacking a cutting edge going forward. The central defensive partnership of Kipre and Naismith had been excellent. When Latics did attack they rarely threw enough players in the box to cause concern for the visitors.

The second half saw a solid Bristol City come more into it, with Latics looking less assured. But until that first goal they were certainly up for the fight. Despite Wigan’s approach play they looked unlikely to score. It was only when Joe Gelhardt came on that they had someone willing so shoot, rather than pass the buck.

Paul Cook is one of the luckiest managers in English football to still be in his job. Let’s hope Darren Royle and IEC are proven right to keep faith in him. He has set himself on a better direction by putting out line-ups that help avoid that awful hoofball.

But he continues to put round square pegs in round holes. Today he played a defensive midfielder, Joe Williams, at number 10 yet again, playing the natural first choice, Kieran Dowell on the left.

Despite his impressive riposte in the local press to people suggesting Gelhardt should be an automatic starter in a mediocre advanced midfield, the jury among fans remains divided. Is Cook shielding Gelhardt from pressure or merely currying favour with his senior pros? 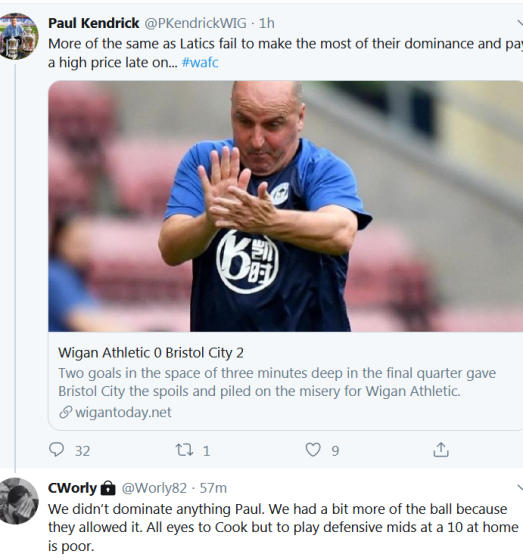 Should have won that but shot ourselves in the foot once again. Our inability to score is a disgrace for professional footballers. The front 4 were once again a terrible selection from Cook. Apart from one hit and hope chance that Marshall tipped over, Bristol City did absolutely nothing and then get a lucky offside goal and then it’s game over as we can’t score.

How many times are we going to dominate and fail to win until Cook realise his line ups are so wrong. Lowe should not be playing, 3 tap ins all missed again. Williams is not an AM, Dowell is not a wide player.

I lost count of the number of balls whipped into the box only to see a red shirt on the end of um to hoof it away. Bristol City clearly came for a point and plundered 3.

It all seems to go pear shaped when Cook makes his subs. Its no reflection on the subs, it just keeps on happening week in week out. We need to follow Gelhardt’s lead and start having a few punts at goal. We spend an eternity passing the ball sideways 30 yards from goal, nobody wants to have a pop, yet we have players who can strike the ball well.

As we keep saying it’s time for a change but it won’t happen.

Too many midfielders and not enough attackers. That’s why we dominate possession but never look like scoring. Cook may notice this if he hadn’t spent the entire game arguing with the fourth official over feck all.

He has struggled this season since signing this summer, but I have remained patient in the hope that he would come good for us and replicate his form over last two seasons for Pompey eventually.

Today however, remaining patience and faith i once had have evaporated, Lowe has had some poor performances so far but that was utterly abysmal.

Spent the entire first half wandering around like a lost child and three moments in the second half summed up his career for us so far in a nutshell. The two guilt edged chances he missed and the pass around halfway that was intercepted by a Bristol City player.

Sadly Lowe is another Grigg/Jacobs, good in League One but just not up to it in the Championship. I’m willing to forgive Moore as the system Cook plays just doesn’t suit his strengths. Lowe however has no excuses.

If ever you need proof that our scouting system and where we do our scouting for fresh talent needs a major rethink, 5 million pounds spent on Lowe and Moore is the answer. It would have been cheaper to have a scout based in Belgium / Switzerland / Scandinavia for a few months and sign 4 players from those markets than the crazy sums frittered away on the two aforementioned players.