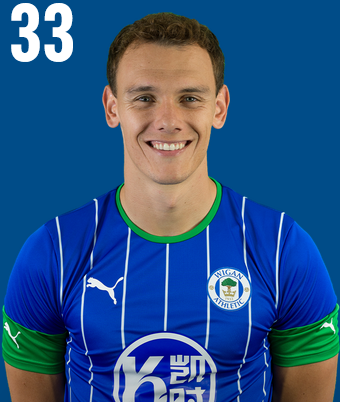 Players in teams that are struggling in the relegation mire tend to play safety-first, being afraid to make mistakes or draw derision from the fans for a shot goes miles wide or a pass that seems to go nowhere.

We saw that in the Bristol City game on Saturday, as we have so often since Latics returned to the Championship under Paul Cook. Things are better now than a few weeks ago. At least the central defenders no longer hoof the ball when under the slightest pressure.

When a team is low on confidence, as Latics are, despite the propaganda to the contrary, it takes courage to stick one’s neck out and not take the easy way out, putting the onus on someone else.

The reborn Kal Naismith bucks the trend. When Cook put the Glaswegian at centre back following Cedric Kipre’s red card at Leeds in April 2019, who would have thought that he could do so well? A flash in the pan most of us were probably thinking.

Naismith had been used at left back in the injury-enforced absence of Antonee Robinson and had played with enthusiasm but was looking suspect when genuine right wingers faced him. It was reminiscent of Kevin Kilbane in the Steve Bruce days: a left sided midfielder playing at left back.

But Naismith is clearly a learner.

Since then Naismith has established himself as a first-choice central defender the quality of football played by the team has really improved. The hoof has disappeared and there has been a huge improvement in the play of Cedric Kipre, his central defensive partner. The Frenchman had fallen way down the pecking order of central defenders at Cook’s disposal. His early promise on arrival from Motherwell at the beginning of last season had seemed to evaporate.

But it is not only Naismith’s ability to move forward and play meaningful passes to the midfield and forwards that has impressed. His reading of the game, the timing of his tackles and interceptions have been a revelation. Some said he would have a hard time facing the more physical centre forwards, but that has not been the case.

Naismith has had real lows at Wigan in his 18 month stay. Having followed the manager from Portsmouth some of the crowd frustration at the manager has fallen on him. Nominally a left winger he rarely had a run of games to make his mark, so often being brought off the bench at difficult times or played out of position.

Some fans compare Naismith with Jordi Gomez, who was the whipping boy for too many so-called fans but went on the win “Player of the Year”. It would be no surprise to see Naismith follow in the same way.

He invited me to write alongside him. I had never written football stuff before. He asked me what nickname I would like to use I suggested “Jakarta Jack”, living in Indonesia at the time. After a quiet start Three Amigos Wigan took off. With Latics in the Premier League the top media companies were interested.

It was a surprise to me when ESPN, the world’s top sports media site, invited us to join them, giving feedback on Roberto Martinez’ Latics. We had to write 3-4 articles per week, published on their site and we also put it on Amigos.

Since those early days Ned has had a change in circumstances, with a young family and a demanding job. I am in regular contact with him and he so often gives me ideas for my articles. I asked him to give me his thoughts on Kal Naismith and here they are:

I think he is fascinating, and I love watching him — particularly now that his transformation is complete from winger to centre back. I didn’t like him as a winger; I did like him as a wingback, and full-back, after his performances in the second half of last season. And now I love him as a centre-back.

Cook has made some appalling tactical decisions over the years, but he actually deserves giant praise for Naismith. The same criticism that has been levelled at his recently for sticking by senior pros out of stubbornness and loyalty, was levelled at him in the early days of Naismith. That was largely because he was being deployed as a left-winger and proving largely ineffective.

You can make an argument that Cook only discovered Naismith’s best position (at this level) by accident. First, Antonee Robinson’s injury last season, forcing him into deploying Naismith as an emergency left wing-back and left-back; and then as a centre-half, to most famous effect in that incredible away with at Leeds. But Cook had seen something in him, to warrant signing him for the Championship despite unimpressive statistical contribution at L2 level. And he has been proven right, eventually. He was a good signing.

In retrospect, I think he clearly lacked pace and dribbling to be a successful winger in the modern game. It’s easy to make comparisons in terms of playing style to David Beckham to justify his existence as a winger, but the game has changed dramatically since Beckham’s days, and there are few players of his kind playing on the wing these days. In fact, many are playing at full-back. It makes David Moyes look quite astute in his deployment of Leighton Baines as a playmaker from that position. Baines too, never had fantastic pace — but sublime technique, poise and intelligence.

So where does he go from here? The sky is the limit, in his new position. He has the athleticism and physique to cope as a centre back. The poise and passing range to play a modern game. And the versatility to prove incredibly useful to managers looking to rotate between a back four and back five, a bit like how Emmerson Boyce gradually became a vital cog in Roberto’s machine. He has the added benefit of being a model pro; content to sit on the side-lines, but performing to a high level when called upon, in a variety of positions.

He’s due a mistake at some point, but his transformation has been dramatic.

Without wanting to write Jamal Lowe off — I do believe think with better man-management and a more gradual introduction he’d be thriving as an impact player off the bench at this stage — Kal is in some ways the anti-Jamal Lowe. He is not blessed with pace or trickery on the ball, or bells and whistles. But he exudes calm and presence of mind. And the impact on those around him is very positive. Instead of rushing or panicking, he is thoughtful and cultured. Those, slightly more intangible skills, should in theory help his further development, should a team higher up the league(s) take note and come calling.