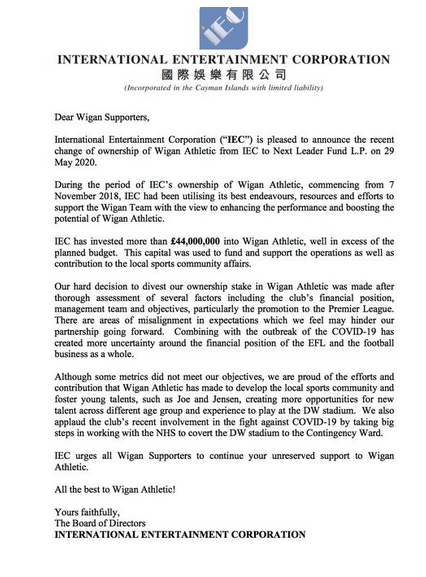 The IEC announcement of the sale of Wigan Athletic to Next Leader Fund L.P. was certainly carefully worded. However, it provided a chilling overview of the task facing the new ownership.

The IEC purchase of the club from the Whelan family was finalised in November 2018, but a little over a year later they gave notice of their intention to sell-up.

IEC had provided a vision of Latics becoming a club which would make itself sustainable by the development of home-grown talent through the academy system. Although they were not going to throw huge amounts of money around in a frantic rush, they nevertheless hoped to get the club back into the Premier League over a period of years, providing prudent financial backing.

The investments made by IEC in improving the academy facilities signaled a rise to Category 2 status, providing the U18 and U23 teams a healthier environment against more challenging opposition. IEC supported a wage bill that was modest by Championship standards, but far outweighed the revenue coming in. Moreover, last summer they provided money for the transfer market for Latics to sign players whose combined market value would surely appreciate. Four were in their early to mid-twenties: Antonee Robinson (22), Tom Pearce (22), Joe Williams (23), Jamal Lowe (25). Kieffer Moore was 27. Robinson, Pearce and Williams had played at Championship level before. Lowe and Moore had not played above League 1 and would need time to adjust to playing in the higher division. IEC’s investments in those players appeared well-judged at the time.

In order to do the above IEC say they invested over £44m in total in Wigan Athletic.

A wealth of information on the process by which IEC dealt with the sale of the club, its assets and debts can be found in the Investor Relations section of the IEC website. However, the documents are by no means easy reading for the layman.

It appears that IEC sold their shares to Next Leader for £17.5m. According to the document entitled Completion of Major and Connected Transactions of May 29, 2020 a “loan” of £24.36m provided by IEC to the club was repaid to them:

The period of ownership of Wigan Athletic by IEC was some 19 months, during which the club has been in the Championship division. In November 2018 when IEC took over Latics were struggling on the field of play. That continued until a 2-1 away win at Leeds in April 2019 sparked a revival that saw them escape the relegation zone. However, accounts published in June 2019 showed that the club had made a net loss of £9.2m, their eighth consecutive loss for the season.

Given the effect of Covid-19 on EFL clubs, lowered average attendances at the DW Stadium and an imbalance in transfer revenues we can expect the losses for the current season to be well above those incurred in 2018-19.

Having bought the club and its debts Next Leader will face a mountain of a task getting the finances of the club in good order.

Were IEC over-optimistic in expecting more on the field of play during their period of ownership? Given the budget that Paul Cook was presented compared with those of rival clubs last season’s placing of 18th in the Championship was by no means a failure. Perhaps IEC, like many fans, were more hopeful of an improved placing this season, given the net investments made in the transfer market last summer? This has been a disappointing season, although the rally in the last six games before the EFL suspended its fixtures provide a ray of hope.

The priority for the club now that the season is about to restart is to avoid relegation. If this were to happen the market values of “prized asset” players would plummet. An added complication is that with the financial hardships that clubs will be facing market transfer values can be expected to decrease over these coming months.

Next Leader must cash in on its main transfer assets to cut down the cumbersome debt that the club has accumulated. If the club plays in the Championship next season it must set its staffing budget at a sustainable level, well below the £19m mark it currently has. The injection of young players from the U23 squad would be a viable option. The likelihood would be that Latics would struggle to avoid relegation under such circumstances, but other clubs will also struggle in the impending financial crisis.

The very existence of the club will be under threat. We can only hope that Next Leader can stay the course and judiciously steer the club back on an even keel. Can that IEC dream of the club sustaining itself through the fruits of its academy and sound investments become a reality?