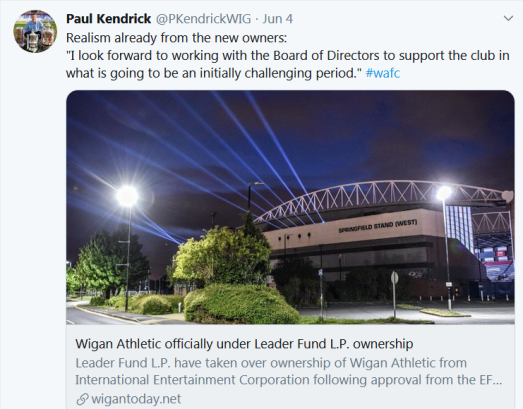 Au Yeung Wai Kay was understating the challenges that he and co-owner Stanley Choi will be facing. Leader Fund L.P. have a mountain to climb over the coming months with the coronavirus pandemic having a huge effect on football club finances.

Comments from Andy Pilley, Fleetwood Town owner, provide a chilling overview of what might happen to English football in general:

“We run the real risk of losing many famous football clubs. It could destroy the integrity of the competitions we love as football supporters. Ultimately the crisis may threaten the very existence of our football clubs if sufficient action is not taken. My concern is that we might have double figures of clubs that go to the wall.” 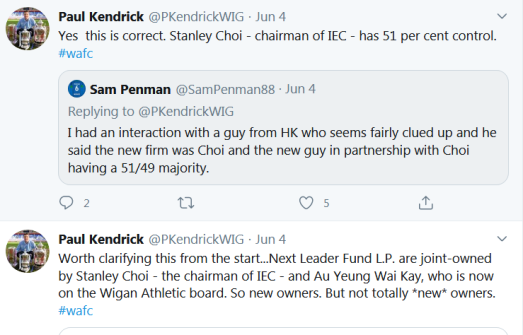 Huddersfield Town chairman Phil Hodgkinson spelled out the revenue shortfalls that clubs will be facing:

We are in the middle of a pandemic. The Government have confirmed categorically that there will be no crowds at sporting events until such a time where there is a vaccine; that’s looking like it could be 2021. What that means for football, at every level, is that there will be no match day revenue, no income coming through. It’s very unlikely that there will be much through sponsors, advertising, season ticket sales, corporate hospitality, everything. Football will be without income other than broadcast income.”

For the moment Latics must focus themselves on retaining a place in the Championship. All 24 clubs in the division have significant numbers of players whose contracts expire at the end of this month. At Wigan this includes Chey Dunkley, Joe Garner, Michael Jacobs, Lewis MacLeod, Anthony Pilkington and Gary Roberts. The loans of Leon Balogun, Alex Dobre, Keiron Dowell, Jan Mlakar and Dujon Sterling also expire on June 30.

Charlton manager Lee Bowyer last week announced that his key striker Lyle Taylor and full back Chris Solly do not want to play when the season resumes on June 20. Their contracts will be expiring and they do not want to risk injury preventing their moves to other clubs. Birmingham City’s David Davis is currently on loan at Charlton but does not wish to return for the brief period before his loan expires.

The EFL will allow short-term extensions of contacts until the season is completed, but clubs have until June 23 to either offer a new contract or release the player. If a player is not offered a new contract for the 2020-21 season he can be recruited by another club from June 24. That period between June 24 and June 30 could be crucial for clubs seeking promotion or trying to avoid relegation.

With such an uncertain scenario, planning for the 2020-21 season is going to be extremely difficult for football clubs. The pundits have already been saying that large numbers of out of contract footballers will become unemployed as clubs have to severely tighten their financial belts. Some will say that it will be a wake-up call to Championship clubs who have ludicrously lived so far beyond their means for so long. Latics remain one of the better-run clubs but even their revenue does not come close to their outgoings.

Matchday revenues for the current season for Wigan Athletic are unlikely to reach much more than £2m. With a wage bill of some £19m the club has been largely depending on broadcasting revenues and the financial support of the owners to stay afloat. Broadcasting brought in £7.7m in the 2018-19 season, when the club made an operating loss of £9.2m.

In order to slash costs Latics will have to drastically reduce their wage bill. It is unlikely that out of contract players will be offered new contracts unless they are on much-lowered terms or the player has a potentially high resale value. Moreover, we might see a fire sale akin to that executed by Dave Whelan in January 2015 when an expensively assembled squad looked headed towards relegation.

The breakdown of Antonee Robinson’s transfer to AC Milan in March was a bitter blow financially to Latics. The season’s balance sheet will be in negative territory. Over the summer the major assets will most likely be sold off.

The prize asset is Joe Gelhardt and Latics will hope a bidding war between competitive clubs in the Premier League will raise prime income, somewhere between £5m-£10m. However, with figures around £50m being toted for Jude Bellingham at Birmingham City, Latics might regret the minimal game time Gelhardt has been given. Will he be put in the shop window by becoming a more regular starter in the nine matches that remain?

In the long term Latics seem to be on firmer ground. The signing of the 15-year-old prodigy Alfie Divine on professional forms is another masterstroke from a well-oiled Latics academy system. 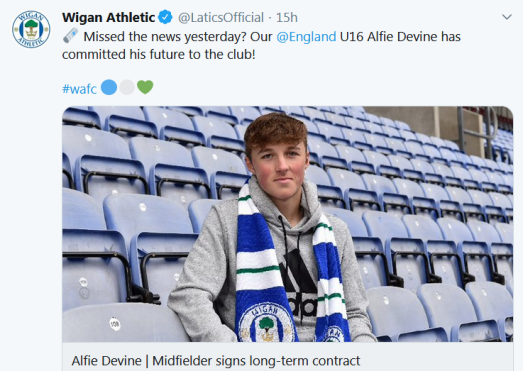 For more on Devine from the Liverpool Echo click here.

There is a wealth of talent coming from the area and Gregor Rioch’s staff continue to pick up young players of high quality.

In order to survive financially at this level over the long term Latics need to capitalise on an excellent youth setup. The system and staffing at those levels is already in place and delivering outstanding results. The next step is to ensure progression for these youngsters to the upper tiers. Devine is only 15 but has already played for the U23 team.

If Paul Cook can once more save Wigan Athletic from relegation from the Championship the season can be regarded as a relative success, given the budget he was given. Cook has talked so much about shielding Joe Gelhardt from pressure, giving him the right conditioning. There has been much debate as to his treatment of the talented young player. Only time will tell if the manager was right or wrong.

But all of this raises the question of whether Cook is the man to deliver the IEC strategy of developing home-grown talent as a means of survival and growth in the long-term. The academy system is as good as it is going to get for a club at this level. But is Cook the manager who will give young players the right amount of exposure? Gelhardt is an outstanding young talent but has only made 3 starts all season in a team short of creativity and goal-scoring threat.

Many things will change over summer at Latics, as will be the case in other clubs. The bottom line for us is that the club survives the crisis imposed on English football by the Coronavirus. But  we cannot expect owners to constantly pump money into an ever-empty pot.

IEC provided a valid blueprint for Latics’ future. We can only hope that ”Leader Fund” can help deliver, by providing the financial backing and appointing the staff they need to create the dream. 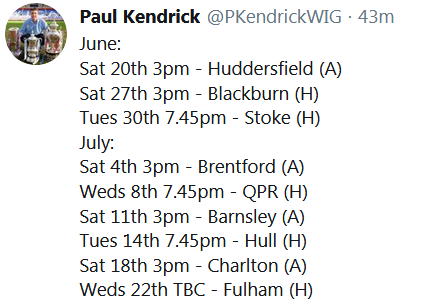