It was a truly awful game of football, but the result was one which helped Latics maintain a six-point lead over the Millers in the relegation dog fight.

Paul Cook opted to bring back Chey Dunkley in the centre of defence for Cedric Kipre. In the absence of Sam Morsy through suspension and Lee Evans through illness he brought in the on-loan Beni Baningime.

Rotherham started aggressively and Latics were under constant pressure. A head injury to Danny Fox after 25 minutes caused him to be replaced by Kipre. Rotherham were playing in a style akin to the Stoke City sides of the Pulis era, a constant stream of crosses being poured into Wigan’s box, aided by the long throw-ins of midfielder Will Vaulks.  It was no surprise when big centre half Craig Robertson headed the Millers in front after 28 minutes with Baningwe and Kipre ball watching. But it was a surprise four minutes later when Josh Windass took his chance with aplomb to level the scores. After being outplayed Latics were fortunate to go to the interval on level terms. They had been overwhelmed in midfield and the hoof dominated their play.

The second half was scarcely any better, although there were a few isolated moments when Latics did put some football together, making Rotherham’s defence look less self-assured.

We have seen some horrible football from Latics away from home this season, but this ranks among the ugliest. Are the defenders playing under orders to hoof the ball away at the smallest hint of danger or is the manager unable to get his players to follow his instructions?

After the game Cook commented: “First of all, I think Rotherham were not far off unplayable in the first-half; they were that good, they were that strong, they put the ball in all of the correct areas. We lost Danny Fox, Lee Evans pulled out ill this morning and we lost a bit of physicality with Lee going out and Beni [Baningime] going in. We knew we were going to have to defend. When Rotherham scored the goal, like most people I wondered if we would buckle under the pressure.”

Let’s take a look at some points arising:

Were Rotherham close to being unplayable in the first half?

Cook’s comment will surely haunt him for time to come. Rotherham have one of the lowest budgets in the division and their squad lacks quality.

Cook is to be commended for openness and honesty in his post-match comments, which so often contrasts to the one-sided, mindless stuff that founts from too many opposition managers.

But he shot himself in the foot with this one.

Rotherham had a game plan: did Wigan?

Rotherham’s game plan was simple, relying on crosses aimed towards the 6 ft 3 in Michael Smith, with the big central defenders coming up for set pieces. On a short and narrow pitch Vaulks’ long throws were akin to corner kicks.

Latics in comparison did not seem to have a plan. So often they played into Rotherham’s hands by kicking the ball out of play in their own half, giving Vaulks a pan-full of opportunities to launch his long throws. Moreover, they gave away too many unnecessary free kicks giving Rotherham the opportunity to bring forward their big guns.

That Latics came away with a point can be seen as a reflection of a willingness to fight, to dig in when under adversity. Effort has rarely been lacking in away games this season, but a genuine game plan has been seemingly absent. The bottom-line yesterday was that Rotherham did not have the quality to make their pressure count.

Latics had a good record against Pulis’ Stoke in the Martinez era. They did not lose any of the eight Premier League games against them. Martinez’ teams always had a plan and the players knew exactly what was expected of them. Aware of the rocket throw-ins of Rory Delap they were careful in possession in their own half, disciplined in their tackling.

Even the best of game plans can come unstuck as the game progresses. But it is disturbing to see Latics going into these away games without any obvious game plan other than gritty defence and hoofing upfield or out of play at the slightest danger.

Another Everton loanee makes his debut

Beni Baningime is 20-years-old and has had one Premier League start and seven substitute appearances for Everton. His first game in the Championship was a baptism of fire.

Baningime looked lost for most of the game, unable to stamp his mark on the play. It was only in the final quarter that he showed the confidence to seek out the ball.

His prior experience did not prepare him for this rough-and-tumble occasion. Only time will tell if Baningime will succeed in his half season at Wigan and make a better impression than previous loan players from Everton have made in recent years.

Cook was unfortunate to lose the experienced and physically more imposing Lee Evans prior to the game. Moreover, he did not have a central midfielder on the bench to replace Baningime if he had wanted to. Neither Shaun MacDonald nor Darron Gibson were in the squad. The latter has been off form of late, but why Cook did not opt for MacDonald’s experience in a tough fixture like that is hard to fathom.

When will Olsson be ready?

It was a surprise to see Jonas Olsson on the bench since the last time he played was for Djuurgardens on November 11. Was some thought given by Cook in bringing on the 6 ft 5 in Swede to counter the aerial threat of Michael Smith? Olsson will be 36 on March 10, but John Terry was playing for Aston Villa last season at 37.

In the event Cook chose to bring on Cedric Kipre who looked solid in defence with Chey Dunkley. However, Fox’s early departure surely had an effect on the football Wigan played. Fox has the skill and confidence to start moves from the back and he adds calm to the defence. Earlier in the season Kipre showed decent passing skills for a big centre half, but yesterday like Dunkley he so often chose to hoof the ball away. Again, the two had opportunities from set pieces which they could not convert. Last season Dunkley scored 7 goals for Latics and Kipre one for Motherwell. One wonders what position Latics would be in now if either had put away some of the chances they have had over these past months.

Kal Naismith had a hard time with Rotherham’s Jon Taylor yesterday and Cook surely needs to take another look at the left back position. Will Antonee Robinson be played there against Stoke on Wednesday? Or will Olsson be brought in to central defence with Fox moving to left back?

Creative and skilful players like Michael Jacobs, Gavin Massey and Anthony Pilkington can stretch any Championship defence. They played at Rotherham but were largely wasted with the ball by-passing them so often.

However, with the prospect of Nick Powell returning on Wednesday will we see a change in approach from the manager? Cook has good players at his disposal but to get the best out of them he needs to insist on keeping the ball on the ground much more. Latics are ill-suited to a long ball approach yet they have continued with it despite the poor results.

Can Cook get his team’s head straight to strike a reasonable balance between possession football and a more direct approach?

The jury remains out on this one. 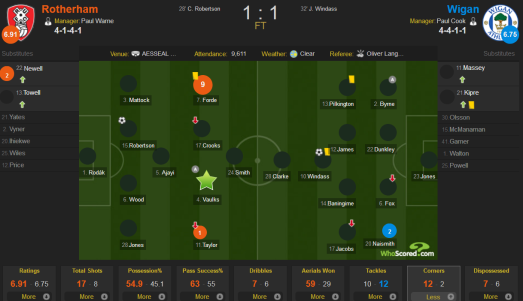 It was always on the cards, but neverthless the sale of Will Grigg to Sunderland has sent shock waves across the Wigan Athletic faithful.

Let’s take a look at how fans have reacted to recent events through the message boards and social media.

Our thanks go to the Cockney Latic Forum, the Vital Wigan – Latics Speyk Forum, The Boulevard of Broken Dreams on Facebook and Twitter for providing the media for the posts below to happen. Thanks go to all whose contributions are identified below.

Chris Stafford on The Boulevard of Broken Dreams commented:

Well the board have revealed themselves to have absolutely no ambition at all on staying up . Sold Vaughan and Grigg and replace him with Leon Clarke . And don’t tell me all about how Clarke was top scorer last season . Grant Holt was top scorer at Norwich.

Up the tics on the Latics Speyk Forum commented:

Looking at our recent signings and lack of ambition can’t help feeling we are doomed for another relegation. So sad to see what is becoming of our club. First post out of sheer anger we buy a 33 year old striker who has scored 3 goals in 24 appearances let Vaughn go sort of understand that but Grigg with one leg is better than Clarke……how can we score another goal ….with Windass, Garner & Clarke with our new front line sounds like from bad to worse…..not to mention Callum sitting on the bench every week because he’s not one of PC boys…..pathetic.

I’ll still go to the DW simply because I’ve seen this all before. No one can deny it’s a damn good price and no one would have blinked an eye if this had of happened in the summer.

The problem is, timing and unloading 2 out your 3 strikers and looking at our league position it just beggars belief. As for the Clarke signing and those who sing his praises? I hope he does. 21 club moves says it all for me. 1 swallow doesn’t make a summer.

Cook suits the IEC and the Royles.

And finally, the subject of Grigg can’t play no Massey Powell, he needs wide players ? We have them, They’re either out on loan or bench warmers. Some people are more bothered about teams below us in the hope that sh……r than us. That’s an excellent way to follow your side.