It was always going to be an uphill task playing against a team vying for automatic promotion. Added to that was the unavailability of Paul Cook’s first choice front four, together with a lack of confidence following poor recent results. In the end the visitors got the result they deserved, but their two goals should have been avoided.

Cook’s starting line-up gave an indication of what to expect. Darron Gibson was brought in for Lee Evans, Cedric Kipre in for a not-fully-fit Chey Dunkley who was nevertheless on the bench. In the absence of Nick Powell, Josh Windass was drafted into the number 10 position, with Joe Garner at centre forward and Kal Naismith on the left wing. Flair players Leonardo Da Silva Lopes and Callum McManaman were confined to the bench.

Reece James has come close to scoring from free kicks before, but this time he found the back of the net after 6 minutes with a superb strike. The early goal must have lifted Wigan’s spirits, but just three minutes later Pablo Hernandez levelled it for the visitors after the midfield had failed to track Mateusz Klich’s run. The Pole had acres of space to run into before squaring the ball for the Spaniard to score. The goal knocked the stuffing out of Latics and they became unable to offer any attacking threat other than launching long balls to Garner and Windass.

Leeds’s style football has been transformed by Marcelo Bielsa. Granted, they still have the kind of rugged defenders as we have come to expect from them over the years, but now they attack with the kind of movement and vision that is rarely seen in the Championship. For the neutral it would have been a joy to watch, but for Latics fans it was painful seeing their team starved of possession and unable to string passes together when they did have the ball.

Cook would have been delighted that his team went in level at half time, given the visitors’ dominance. But any delight he might have had soon disappeared as a mix-up between Christian Walton and Kipre gifted Kemar Roofe a tap in goal after just one minute. With their backs to the wall Latics managed to prevent further goals from the visitors but offered little attacking threat. McManaman had been brought on after 63 minutes but could make little impact with the awful service the front players were receiving. Da Silva Lopes came on for an anonymous Naismith after 70 minutes, but he too struggled to make an impact. But one wonders if even Leo Messi could have done much given the muted service from an overrun midfield and a pressured defence. In fact the two substitutes combined well after 85 minutes Da Silva Lopes slipping the ball to McManaman in the left of the penalty box. Macca cut inside his defender to curve the ball narrowly wide of the far post.

Following the game Cook commented: “We’re just massively disappointed, especially with the start we had and then to concede so quickly and the way they scored their second goal just after half-time. You have to be fair and say Leeds carried a threat all game and they were excellent at times, especially with the pace and movement of their forward players, but we managed that, and we were controlling that, as well as looking like a threat going forward.”

Let’s take a look at some points arising:

A Sea of White Shirts 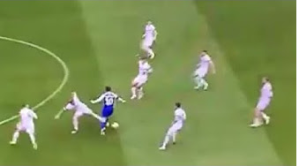 In the 52nd minute Latics mounted a sharp counterattack with Gibson put Windass through from his own half with one Leeds defender in front of him and the goal. Within just 6 seconds the Latics player found himself hopelessly outnumbered by no less than 7 Leeds players, with not a teammate supporting him. You can see the clip on this Twitter link.

The “Sea of White Shirts” was hugely impressive and can be seen as an indicator of the commitment that Bielsa has instilled into his team. That Latics players did not support Windass should be seen in the context of a team “under the cosh”, reluctant to push forward in case of conceding more goals.

In February 2017 Pep Guardiola commented “My admiration for Marcelo Bielsa is huge because he makes the players much, much better. Still, I didn’t meet one guy, a former player from Marcelo Biesla who speaks no good about him. They are grateful about his influence on their careers in football. He helped me a lot with his advice. Whenever I speak with him I always feel like he wants to help me.”

Paul Cook too has instilled commitment into his players. Despite indifferent recent results he has done a wonderful job so far at Wigan. Cook is new to the Championship and will surely get even better. He has a wonderful career record in the lower leagues and was a very successful player in England’s second tier. If he continues to learn and develop at this level Latics will surely have difficulties in warding off approaches from other clubs.

Breaking up the Dunkley-Kipre partnership

Dan Burn’s return to fitness has posed selection problems for Cook. Burn was outstanding in League 1 last year and the previous season in the Championship was Latics’ “Player of the Season”. He is due to join Premier League Brighton in January.

However, Burn has not looked impressive since returning. Yesterday he looked far from a player who could be a success in the Premier League. Was Cook right to break up the Dunkley-Kipre partnership to bring in Burn? Is there a clause in Burn’s loan agreement that requires him to get regular games?

When he was last in the Championship Burn had lots of protection in a Warren Joyce team that played with a massed defence. He is at his best when the ball is in the air. Yesterday he had to face the touch play and movement of Bielsa’s Leeds.

But Burn cannot be written off. With more game time he will get better and better. In fact, he could be invaluable at Middlesbrough on Saturday given the mode of attack that typifies Tony Pulis’ approach.

The option remains for Cook to amend his approach and play a Burn-Dunkley-Kipre trio. Given his belief in 4-2-3-1 it is unlikely.

Fitting in the flair players

It was a surprise when Latics signed Callum McManaman, given Cook’s preferred style of football. One suspects the manager does not trust him defensively and he doesn’t have the vision to be a 10 but also does not put enough balls in the box to be a winger under Cook. In essence his position is “inverted winger”. Cook has found it hard to find a suitable role for the player within his system.

Cook has bided his time in bringing in Da Silva Lopes. He is a raw and exciting talent but is hardly “green” with over 100 appearances for Peterborough although still only 19. During his career he has played in various positions and Cook will have to decide which is his best.

We can only hope that Cook will find ways of incorporating the two “flair players” into the team on a more regular basis.

Another flair player was absent yesterday too. On the face of things Lee Evans is a solid, hardworking central midfielder. But he is also the player who has created the most chances this season, not only from his set pieces but also from his superb crossing in open play. His creative influence was very much missed.

Nick Powell was sorely missed yesterday. When he is not present the standard of Latics’ football so often deteriorates.

The rumours have started to resurface that Powell will leave in January. It is indeed a possibility. Everton’s Kieran Dowell is already being touted for a loan in January. Dowell is an England under-21 international who played 38 games for Nottingham Forest last season.

Whether Powell signs a new contract or leaves will give us a glimpse into the new ownership of the club and its mode of operation.

The media has been awash with the news of the takeover and the end of the Whelan dynasty. It has been an emotional time for Latics supporters, given the departure of the man whose drive, vision and financial support put Wigan Athletic on the world football map.

However, we now face a new reality. The IEC will be the new owners and the club’s future is less certain. Pleasantries have been passed between the Whelans and IEC, but nobody has let us know why the takeover has been so protracted.

But we must face reality. No one can rightly criticise DW for deciding not to pump more funds into the club after 23 years of ownership/sponsorship. The question is whether IEC is right for the club. Were there other meaningful offers? What does a business such as IEC have to gain from the takeover?

In the meantime, we must try to be positive about the takeover. Much will be revealed over the next three months, with the January transfer window likely to give us indications of IEC’s intentions.