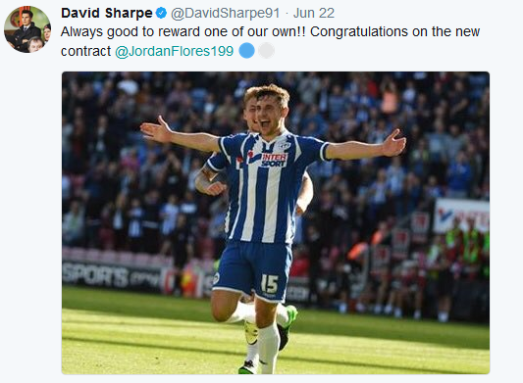 Relegation can dampen the spirits of even the keenest football supporter. But three such occurrences in just five years, combined with a profligate waste of some £74 million of parachute payments is a real downer.

Morale had not been particularly high for Wigan Athletic fans over these recent weeks. But then came the announcement  that local lad Jordan Flores had signed a new two year contract. It came as a bit of a surprise as there had been no news about the player for weeks.

“Always good to reward one of our own” were David Sharpe’s words as he announced the new contract on Twitter. In one instant it brought visions of a future where Wigan Athletic would at last have faith in home-grown talent, rather than incessantly bringing in loan players. It raised the feel-good factor, at least for a while.

But the warm feeling started to wither somewhat as the tweet above appeared on Twitter. The article went on to quote the chairman as saying:

Those words of Sharpe caused the alarm bells to ring. Did he really mean just two of the likes of Dan Burn, Will Grigg, Sam Morsy, Max Power or Nick Powell will be going and the others staying?

A couple of years ago Latics had been relegated to League 1, but the chairman’s optimism over the summer of 2015 was uplifting. The famous quote about “smashing League 1 with 100 points” was a trifle overexuberant, but it set the tone over a summer of huge changes in the playing staff. Most of the high earners were sold off, paid off or loaned out, but the chairman played his trump card in paying up to £1 m for Will Grigg.

The end result was that the budget had been massively cut, but with the parachute money the club was still able to offer above-average salaries to attract players more than good enough for the third tier. Sharpe’s positivity continued into the season and at the midway point he paid somewhere approaching £1 m to sign Yanic Wildschut on a permanent contract. The Dutchman and Grigg proved to be crucial signings as Caldwell’s team won the division title.

Sharpe made efforts to keep the bouyant feeling obtained by winning League 1 by offering season tickets at levels well below the market rate. In the meantime Gary Caldwell started to bring in many more new players than he had previously predicted. The manager clearly did not believe the squad was good enough to survive in the Championship after all. There was no £1 m signing this time around, but ex-players Jordi Gomez and Nick Powell were brought in as marquee players on relatively high salaries.

Caldwell’s team had a poor pre-season and his tactics in the early league games were conservative. The manager had reportedly wanted Callum Patterson from Hearts to solve the problematic right back position, but Wigan’s bids had fallen far short of the Scottish club’s valuation. Midfield player Conor Hourihane of Barnsley was also apparently on Caldwell’s wanted list but nothing resulted. The woeful decision by Sharpe to replace Caldwell with Warren Joyce was to ultimately lead a demoralised squad to relegation. The possession football we had seen under Caldwell evolved into “fightball” under the ultra-defensive Joyce.

According to the Premier League website Wigan Athletic received £16,298,146 in parachute payments last season. Transfer fees paid out in summer 2016 were relatively modest. In January they jettisoned two of the highest wage earners in Jordi Gomez and Adam Le Fondre. Speedy winger Nathan Byrne was sent on loan to Charlton. The sale of Yanic Wildschut to Norwich was reputed to be in excess of £7 m including add-ons. It was rumoured that the wage bill at the start of the season was around £17 m. Joyce himself remarked on how he had reduced that wage bill by the January comings and goings. But the end-result on the field of play was the loss of a proven goal scoring centre forward, a creative midfielder who had previously proved himself to be a top Championship player and two wide players with searing pace. Some fans at the time had remarked that it looked like Latics were planning for relegation even in January.

After his disastrous appointment of Joyce, Sharpe wisely took his time in searching for the right man for the coming season. Paul Cook has a fine managerial record and his teams play the kind of good football that went out of the window under Joyce. However, after the initial hype of Cook’s appointment, including the angry reactions of Portsmouth fans, it has been surprising that we have not seen much of the new manager in the media since then. When Cook was appointed, Sharpe had said that “The squad is in very good shape; it doesn’t need major surgery but he may want to do a few bits if a couple of players leave but the core of it is very good and that was a big attraction to him.”

Since Cook’s appointment a couple of players have already left. Matt Gilks went to Scunthorpe who were able to offer him the kind of contract that Latics were unable or unwilling to provide. Jake Buxton was a rock in defence last season, but has already left the club by mutual consent.

The departures of Gilks and Buxton can be seen as indications of the club lowering its budget, which it clearly needs to do, given its huge potential loss in revenues. Despite what the chairman is saying it would be a surprise if only two more of the present squad leave before the season starts on August 5th.

The question is how Sharpe is going to use the remainder of the substantial revenues that came in last season? Will they be used to service the club’s debt? Or is he really planning to keep all of last season’s squad that remain, bar two?

At this stage there is not the level of optimism among the fans that one would expect with  a new manager coming in who has an impressive track record. The loss of parachute payments weighs heavily in our minds. Will Cook receive the level of financial and personal support from the chairman that is needed to get Latics back to the Championship?

Sharpe’s gesture in offering an extended contract to Jordan Flores is certainly good PR and we can only hope that it is a sign that home-grown talent will be given a better chance to succeed than we have seen in recent years. However, the chairman needs to enunciate his broader strategy.

What is his vision of what he wants for the current season and how he will achieve it? If he were to say that it was to be a period of austerity for the club, with any profits from last season used to pay off debts, few could argue with him if he is looking at the club’s long-term sustainability. If he were to say that he will have to make major cuts in the squad since the club needs to cut its cloth according to projected revenues, then once more it would be hard to argue against.

David Sharpe has a difficult task ahead of him. Like all of us he has made some good decisions and some bad ones. Perhaps his most redeeming quality as Wigan Athletic chairman is that he considers himself a fan, first and foremost. Moreover he is eloquent and very comfortable with the media.

The coming season will be the acid test for the young chairman. Should he take a gamble and back the new manager with a war chest to get the club back to the Championship? Or should he look at financial consolidation and future sustainability?

Without the parachute payments the feel-good factor has dropped alarmingly. How will the chairman deal with it?